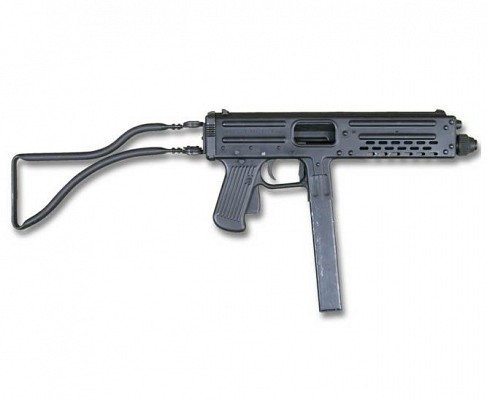 The LF-57 is a sub machine gun of Italian origin. It was developed in the mid 1950's by Luigi Franchi. The name is derived from the initials of its developer and the year of introduction. Although the LF-57 functioned well, it saw little sales due to competition from contemporary designs such as the M12, MP5 and Uzi.

The LF-57 is a blowback operated weapon that fires from an open bolt position. It bears much resemblance to the prototypes that led to the development of the Beretta M12. The LF-57 is made of stampings and pressings and features a steel wire shoulder stock. A unique design feature is the recessed bolt above the barrel, which makes the weapon shorter but requires a higher receiver.

The LF-57 fires the 9x19mm NATO round from a 20 or 40 round magazine. The LF-57 fires fully automatic only and has a cyclic rate of fire of 500 rpm. Since it fires from an open bolt position and has a heavy bolt the LF-57 is not very accurate, but this is offset by its capability of prolonged automatic fire. The maximum effective range is about 150 meters.

The LF-57 is a sub machine gun with unique external features. It has a tall but slim receiver and is fully made out of metal. At first only 20 round magazines were available, these were later supplanted by 40 round magazines. Only a single variant was ever developed. This was a semi-automatic version with 406 mm barrel to serve as a police carbine. This version is known as the LF-62 or the Police Model 1962.

At a glance the LF-57 looks very similar to the German Walther MPL and MPK sub machine guns.

The Beretta M12 was a domestic competitor to the LF-57 and proved to be more successful.