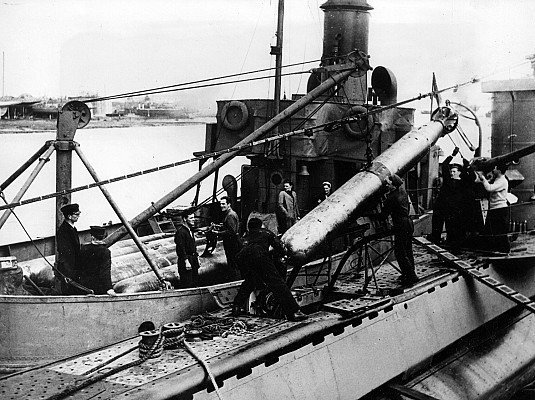 The Mark VIII is a pre-World War 2 era heavyweight torpedo of British origin. It was developed in the 1920's and was the main British torpedo in World War 2, accounting for over 55% of all torpedoes fired. Despite its widespread service in World War 2, it is most notable for sinking the Argentine cruiser General Belgrano in 1982 during the Falklands War.

The Mark VIII is the first British burner-cycle torpedo. It is a heavyweight torpedo launched from destroyers, motor torpedo boats and submarines against surface vessels. The design was altered over the years by adding a selectable speed setting, improving the gyroscope and depth finder, exchanging the TNT warhead for Torpex and increasing the range by using improved internal components.

The Mark VIII is a straight running torpedo without guidance. The 340 kg TNT or 327 or 365 kg Torpex warhead is fitted with an impact fuse. Most Mark VIII have to selectable speed settings. Maximum speed of 45.5 knots results in a 4.6 km range. The maximum range of 6.4 km is achieved at a speed of 41 knots.

The Mark VIII torpedo saw widespread use during World War 2. After World War 2 it was redesignated as the Mark 8 torpedo and served in the Royal Navy until the 1990's. Various nations acquired the Mark VIII, such as West Germany where it was replaced by indigenous homing and/or wire guided designs. Although obsolete, some nations may still retain the Mark 8 in their inventory today.