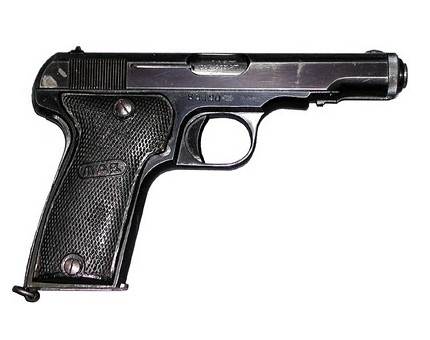 The Mle D is a pre World War 2 era pistol of French origin. It was developed in the 1930's for police and military use. The official name is "Modèle D", but this is often abbreviated to Mle D or MAB D.

The design of the Mle D is based on the earlier civilian Mle C. The Mle C is in turn inspired on the FN model 1910/22. The Mle D is a long and thin pistol made out of metal. It has plastic grip plates, is available in two calibers and uses single stack magazines.

The Mle D is a single action semi-automatic pistol. It fires the 7.65mm Browning from a 9 round magazine or the .380 ACP from a 7 round magazine.

The Modèle D was adopted by the French military and law enforcement before World War 2. During the war it was produced for Nazi Germany. After the war it remained in wide use throughout various French agencies, although revolvers remained more popular. It was also exported to several nations with close ties to France. Additionally it was sold on the civilian market.