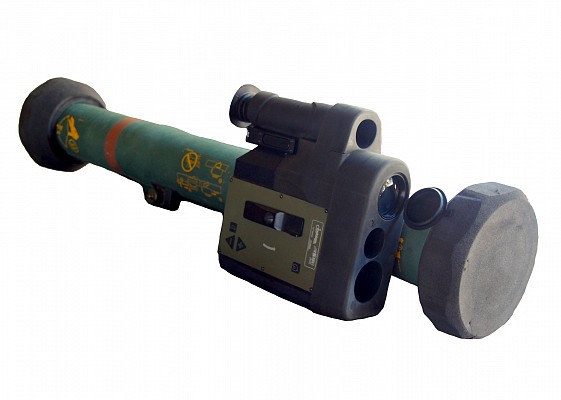 The Alcotán-100 uses disposable fixed length launch tubes. Four types of warhead have been developed. The rockets are launched using a booster charge and a separate sustainer motor retains a constant velocity by counteracting the drag. Using the Davis countershot principle the rockets can be launched from confined spaces. After firing the sight unit is disconnected for future use and the launch tube is disposed.

Alcotan-AT
Tandem HEAT warhead for use against tanks, including those fitted with ERA.
Alcotan-BIV
Multipurpose warhead with shaped charge and fragmentation sleeve for use against armored personnel carriers and infantry in the open.
Alcotan-ABK
Anti-structures and bunker buster warhead. Features a penetrating charge and 2.500 steel balls.

The VOSEL sight unit is the brain of the Alcotán-100. This is a combined day and night sight and features a ballistic computer fed by manual input and a laser range finder. The optical sight has a 3x magnification and replaceable batteries. The ballistic computer calculates lead in 0.3 seconds. In the first generation Alcotán-100 this sight unit was placed in a rugged casing with grips on either side. The current and most common version is the Alcotán-100 (M2) in which the sight unit is more compact. The sight unit can be used as a standalone sight for observation purposes.

The Alcotán-100 can be used out to 600 meters against point targets. The BIV multipurpose warhead can be used out to 1.200 m for area targets. The tandem HEAT warhead of the AT variant penetrates over 700 mm of RHA behind ERA. The sight unit with ballistic computer and night sight provides a better chance to hit than regular rocket launchers with a mechanical ladder sight.

The Alcotán-100 was adopted by the Spanish armed forces in the late 1990's. Various nations have acquired smaller quantities of this weapon. A larger export sale took place around 2015, comprising of 158 sight units and over 1.400 rockets to Pakistan.