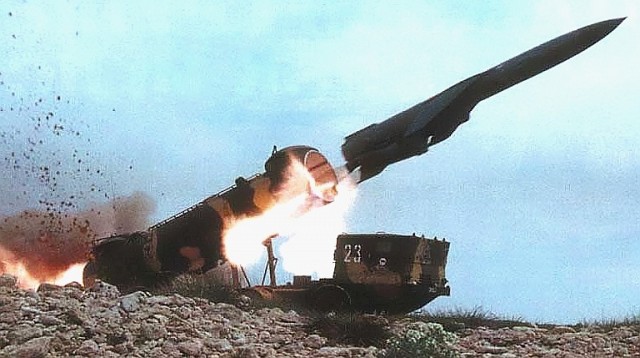 The 4K44 Redut is an early Cold War era coastal defense system of Soviet origin. It was designed to supplement and replace the earlier S-2 Sopka (NATO: SS-C-2b Samlet) missile batteries. The 4K44 system uses the P-35 (NATO: SS-N-3 Shaddock) missile which was also used on Soviet naval vessels. In the West the system is known by its NATO designation SS-C-1 Sepal.

The 4K44 Redut system consists of a 4R45 Skala radar and command vehicle that controls up to three launch vehicles. The launch vehicles as based on the BAZ-135MB eight wheel chassis. Due to the large size of the missile these hold only a single missile per launch vehicle. Semi-trailer transloader vehicles carry additional missiles.

The missile used in the original 4K44 system is a modified version of the P-35 Progress, known in the West by its NATO designation SS-N-3 Shaddock. These long range missiles have a selectable low-low or low-high pattern. The low-low flight pattern is about 400 m above sea lever, lowering to 100 m at about Mach 1 in the terminal phase. The low-high flight pattern may reach up to 4 or 7 km depending on the desired range. The missile dives down at Mach 1.5 towards the target.

The missile is controlled by the trailer based 4R45 Skala radar and command system. Up to three launch vehicles can be linked to a single command system. Additionally the Tu-95RT (NATO: Bear-D) maritime patrol aircraft or Ka-25K (NATO: Hormone) naval helicopter can provide mid course target updates. Due to its long range the P-35B missile must use inertial navigation and mid course updates until it reaches the target area. Various operational ranges are quoted. The low flight pattern can probably reach up to about 250 km. The higher altitude flight plan can reach 350 km, possibly further.

The 4K44 Redut system is mobile but does require some time to set up. The system is mainly road mobile, but can traverse terrain to reach a firing position.

The main user of the 4K44 was the Soviet navy. Most systems have been inherited by Russia. It was also exported by the USSR to a few nations with close ties to the Soviet Union. In Soviet service the Redut was complemented by the shorter range and less complex 4K51 Rubezh (NATO: SS-C-3 Styx) system. Despite its age the Redut remains in active use today. In recent years drills and test launches have been carried out by Russia, Syria and Vietnam. 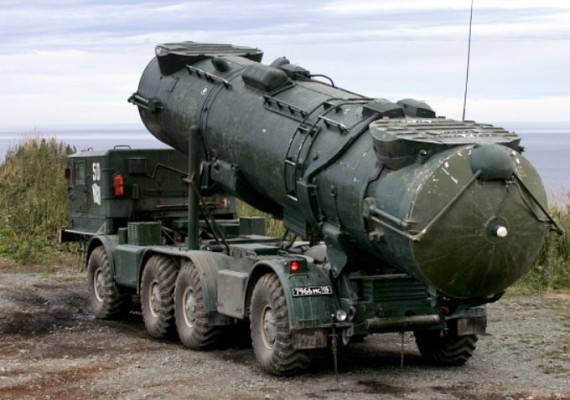 The launch vehicle is the best known and most photographed part of the 4K44 Redut system. The SPU-35V is based on the BAZ-135MB eight wheel chassis. The large canister holds a single missile. The front and rear doors are opened before launch. Three or four of these vehicles are used per battery. A single P-35B anti-ship missile is carried per launch vehicle. Additionally, for every launch vehicle a second missile is transported on a two axle semi-trailer with Ural-375V tractor truck. The P-35B was supplemented by the improved 3M44 Progress missile in 1982. 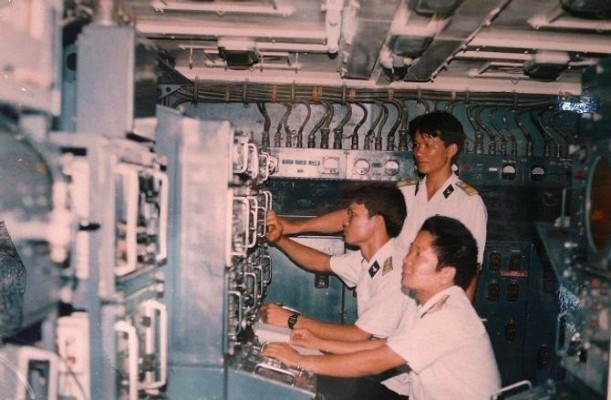 A single fire control system is present per battery. This provides launch parameters for the launch vehicles and missiles within. A surface search radar is part of the fire control system. This allows it to independently acquire targets and their coordinates. Since the land based radar is limited by the radar horizon external target input is required to utilize the full potential of the missiles. 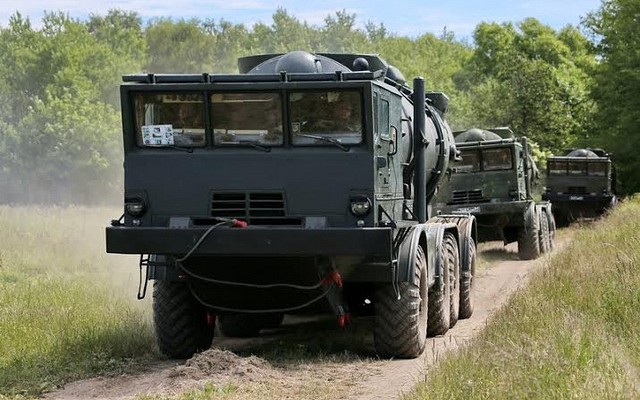 Vietnamese Redut system lined up with the 4R45 Skala radar at the rear, two SPU-35V launch vehicles center and P-35 missile on transloader at the front. 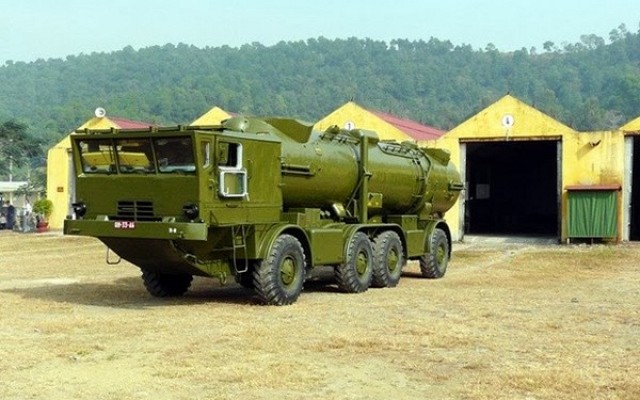 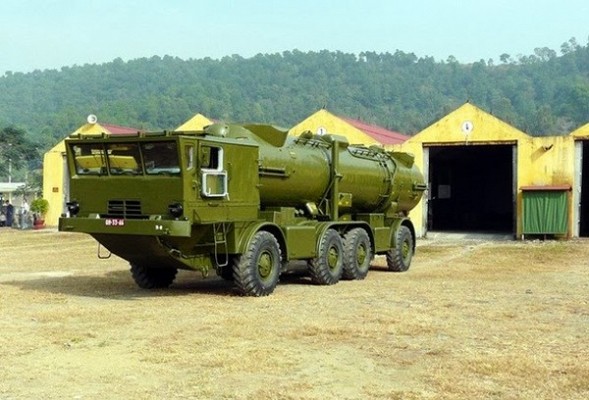 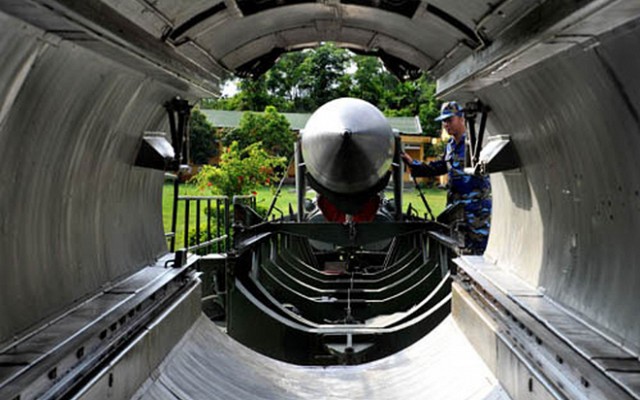 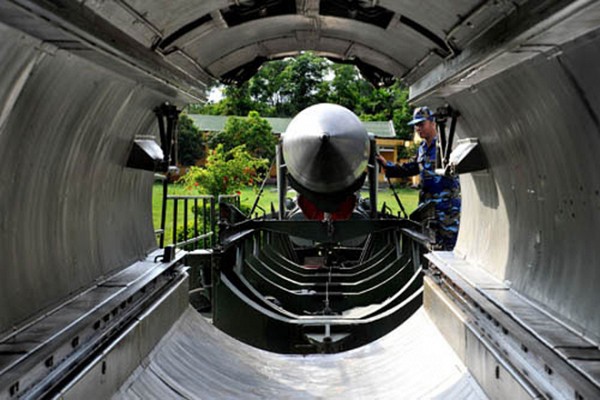 P-35 missile being loaded into a SPU-35V launch vehicle by its Vietnamese crew. 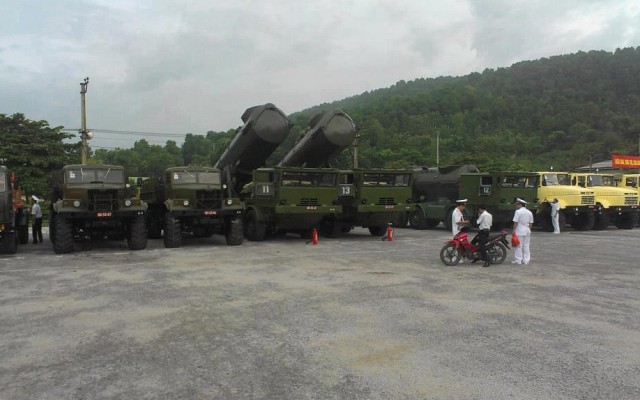 The 4K51 Rubezh (NATO; SS-C-3 Styx) was developed as a less costly alternative to the 4K44 Redut.