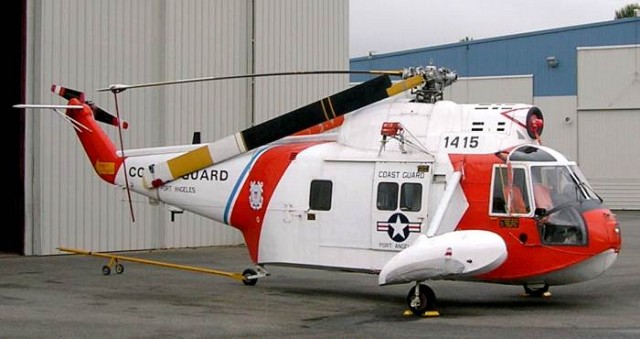 An S-62C in use with the US Coast Guard as the HH-52A Seaguard.
Source: Greg Goebel @ www.vectorsite.nl - © copyright lies with original owner

The S-62 is an early Cold War era naval utility helicopter of US origin. It was developed by Sikorsky as a private venture in the 1950's. Introduced in 1961 it was the first turbine powered helicopter approved for sales in the USA. Although the design was successful only a limited number of S-62 were produced compared to other Sikorsky models.

Externally the S-62 looks like a much smaller S-61 Sea King. Internally it is more similar to the S-55 as it uses the same transmission and tail rotor. Even though it is the first US turbine powered helicopter the rest of the design is very conventional. The two pilots are seated at the front. The main cabin is accessed by a large door at the right. A three blade main rotor and two blade tail rotor are fitted. The main rotor can be folded to save space when stored on a ship. The boat shaped hull allows the S-62 to land on calm water. The large sponsons at the side hold the landing gear and double as flotation pods. The S-62 is unarmed.

The S-62's used by the US Coast Guard are fitted with a 250 kg winch at the side door. Several people may be seated in the cargo hold. The maximum load is almost 1.400 kg and includes crew and passengers. Compared to the older S-55 the payload capacity is increased.

The primary user of the S-62 was the US Coast Guard who adopted it as the HU2S-1G Seaguard. It was renamed in 1962 as the HH-52A Seaguard. The S-62 was also sold to various Asian nations for military use. Additionally the S-62 was sold on the civilian market.

The S-62 is a naval utility helicopter that looks like a smaller version of the S-61 Sea King. Internally the design is more akin to the S-55.

The S-62A was the first production model that was developed for commercial use. With slight modifications the S-62A was adopted by the US Coast Guard. The Sikorsky designation for the modified model is S-62C. Military users mainly operate the S-62C model.