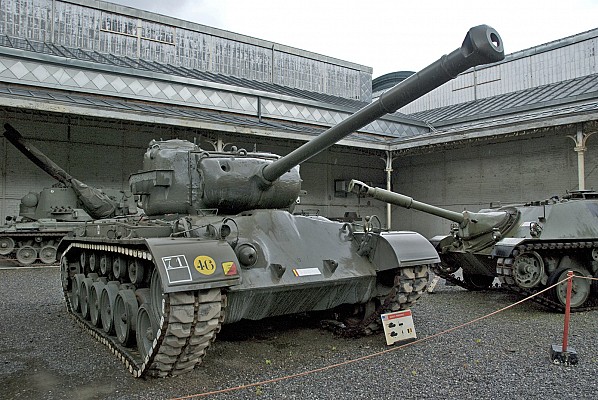 The M26 Pershing is a heavy tank produced in the USA during the later stages of World War 2. It was better armored and carried a more powerful gun than the M4 Sherman and was a much better match against the latest German tanks. The M26 was built and used in limited numbers but paved the way later US tanks such as the M47, M48 and M60 Patton.

The M26 Pershing is a major design change compared to the M4 Sherman. The M26 has a layout similar to modern tank. The driver is seated in the front of the hull and is accompanied by a assistant driver/bow gunner. The large turret houses the commander, gunner and loader. The engine and drivetrain are mounted at the rear.

The main armament of the M26 Pershing is the 90mm M3 gun. The 90mm gun was much more powerful than the 75mm and 76mm guns used on earlier US tanks. The gun could be used up to 1.5 km. The most powerful shell is a HVAP round with a muzzle velocity of 1 km/s and 200 mm of penetration at 1 km. A .30-06 M1919A4 was fitted as a coaxial machine gun and a second one as a bow machine gun. A 12.7mm M2HB heavy machine gun is mounted on the turret roof for use against aircraft.

The thick steel armor provides a much higher level of protection than the earlier M4 Sherman. During the Korean War it proved to provide a reasonable protection against the Soviet T-34/85. The M26 Pershing is not fitted with a NBC system, fire extinguishing system or smoke grenade dischargers.

The M26 had a limited mobility as it was lacking power and had an unreliable transmission. The engine of the much lighter M4 Sherman was used and provided a low power to weight ratio. Most subsequent upgrades focused on these issues and the M46 Patton was much more mobile and reliable. The original Ford GAA gasoline engine provided 450 to 500 hp, the later Continental AVDS-1790 gasoline engine provided 810 hp.

The M26 Pershing was used by US forces in Europe during World War 2 and during the Korean War. After World War 2 surplus tanks were given as aid to several European nations, with Belgium being the main recipient. The improved M46 Patton was used in the Korean war and replaced the earlier M26. The M46 Patton led to the design of the M47 Patton, which was produced is much larger quantities. 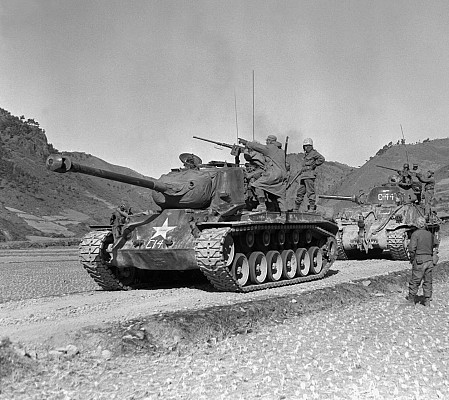 The M26 Pershing is the production version of the T26E3 prototype. It is was a major change in tank design compared to the ealier M3 Lee and M4 Sherman. The M26 is a heavy tank that is fitted with a 90mm M3 cannon in a large turret. It was better armored and had more firepower than other US tanks during World War 2, but suffered from a lack of power. The M26A1 is an upgraded M26 with an improved M3A1 gun in a new mount. 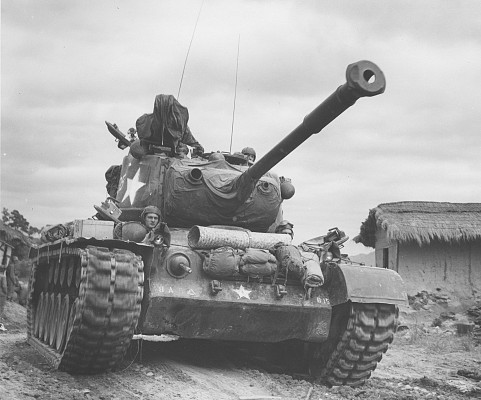 The major defect of the M26 Pershing was its limited power and unreliable drivetrain. In the T40 prototype this was remedied with a more powerful engine and new transmission and drivetrain. The T40 was not taken into production, but hundreds of M26 were rebuilt to this standard. The new tank was found to be so different from the original that a new designation would be appropriate. This became the M46 Patton, making it the first in the long lineage of Patton tanks. The latest batch to be upgraded to M46 standard was designated M46A1. It has a newer version of the same engine and transmission as used in the M46. 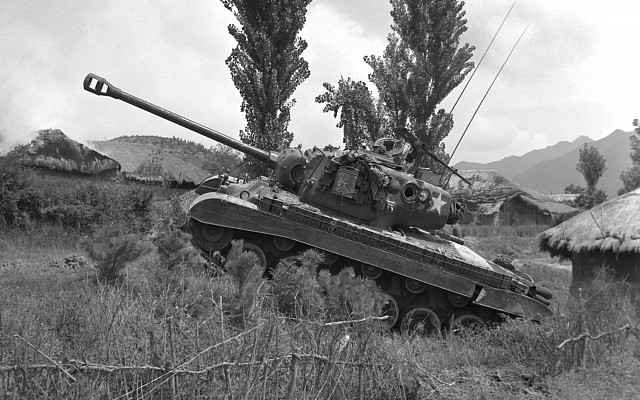 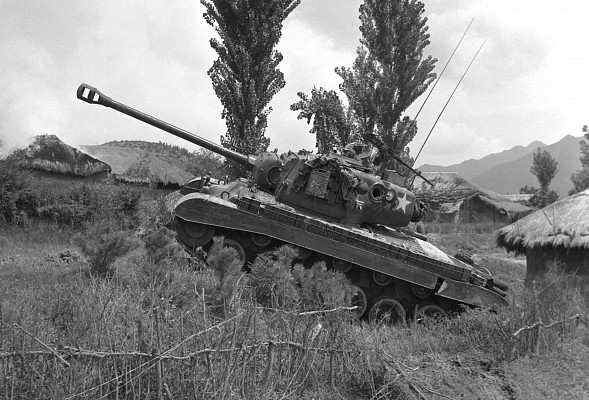 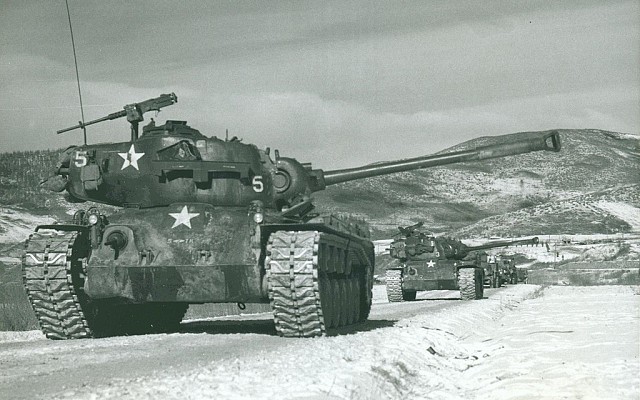 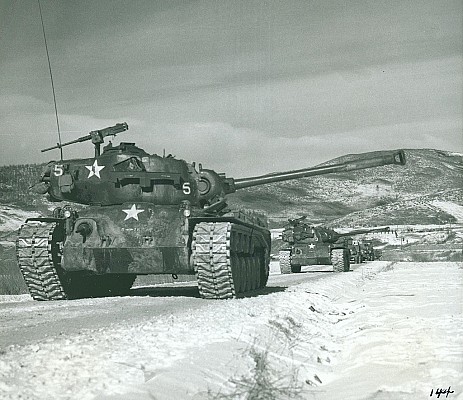 American M26A1 Pershing heavy tanks taking aim while on patrol in Korea in 1950. 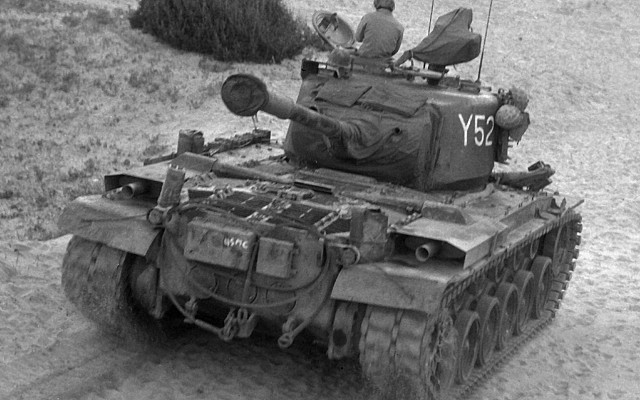 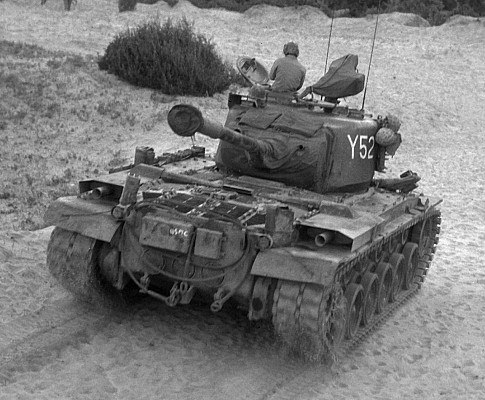 USMC M46 Patton tank just landed by an LSU to support marine infantry in Korea in 1952. 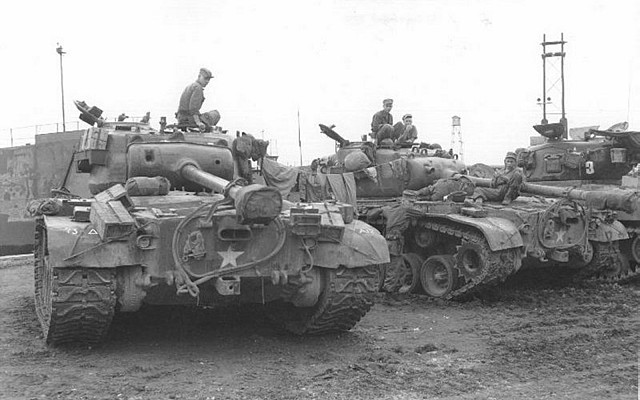 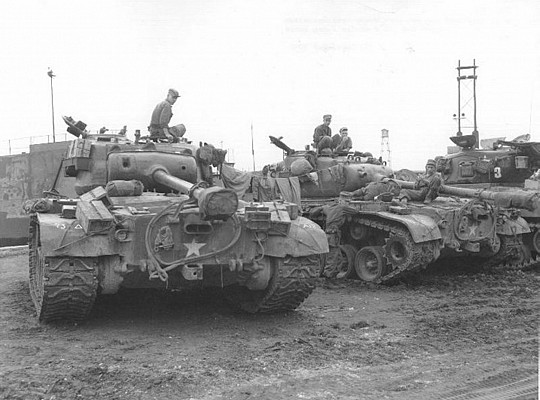 Several US M26 Pershing heavy tanks seen in Korea in travel configuration with their turrets facing rearward and their guns in the travel lock.

The 12.7mm Browning M2HB heavy machine gun is mounted on the roof for use against ground targets and aircraft. A total of 550 rounds are carried.