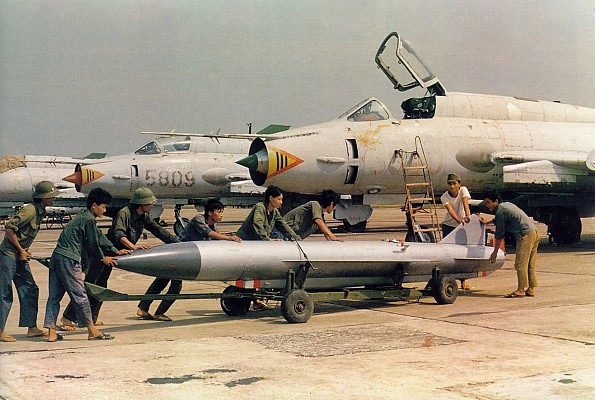 Kh-28 anti-radiation missile in use with Vietnamese air force Su-22.

The Kh-28 is an anti-radiation missile of Soviet origin. It was developed as a long range standoff weapon against Western SAM systems. Initially developed for use by the specialized version of the Yak-28, it was more widely used on the Su-17 ground attack fighter.

The Kh-28 uses a liquid fuel rocket motor, which significantly complicates ground handling. Early prototypes used solid propellant. These were unable to meet the distance requirements set for use as a standoff weapon. In line with most early anti-radiation missiles the seeker can be exchanged by the ground crew. Before each mission a seeker must be selected to match the type of radar used by the intended target.

The Kh-28 was developed for use on the Yak-28N. Two missiles could be carried, but the aircraft did not enter service. The Su-17 series became the foremost launch platform. The Su-17M, M2 and M3 could carry a single missile under the fuselage and the Metel-A targeting pod under the right wing. The export Su-20 and Su-22 could be armed with the Kh-28 as well. The Su-24 and Su-24M strike aircraft could carry and launch two Kh-28 missiles.

Kh-28
Original version targeting Nike-Hercules and Thunderbird SAMs. During its service life it was improved in order to target Hawk and possibly other radars. In the West the Kh-28M moniker is used, but this is a design project that later resulted in the Kh-58.
Kh-28E
Export model of Kh-28.
Nisan-28
Iraqi modification of Kh-28E displayed in Baghdad in 1989. Reported to have three seeker heads for different frequency bands. 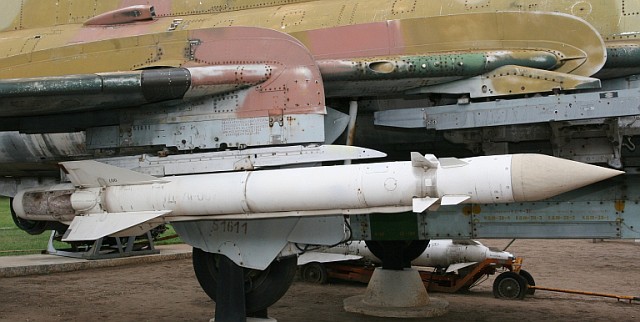 The Kh-25MP is a more modern Soviet anti-radiation missile than the Kh-28. It lacks the range of the Kh-28, but is a much less complicated weapon system.