The PPS-43 is a World War 2 era sub machine gun of Soviet origin. It was developed during the siege of Leningrad. During this time a cheaper and easier to produce weapon than the succesful PPSh-41 was required. The name PPS stands for "Pistolet Pulemyot Sudayeva" or "Sudayev sub machine gun".

The PPS-43 is a blowback operated weapon that fires from the open bolt position. The simple stamped receiver houses the bolt with its integrated cocking handle. Even without a wooden stock the PPS-43 requires less steel and parts than the PPSh-41. The curved magazine are not interchangeable with those of the PPSh-41.

The PPS-43 was widely used by Soviet forces during World War 2. After the war it remained in limited lower tier use. Many were exported to Soviet allies in Africa and Asia. After World War 2 the PPS-43 was also produced under license, most notably in China as the Type 54. Nowadays the PPS-43 is long obsolete and is only encountered on a limited scale in third world conflicts. 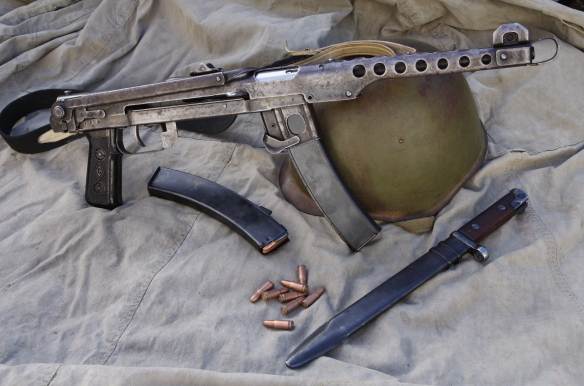