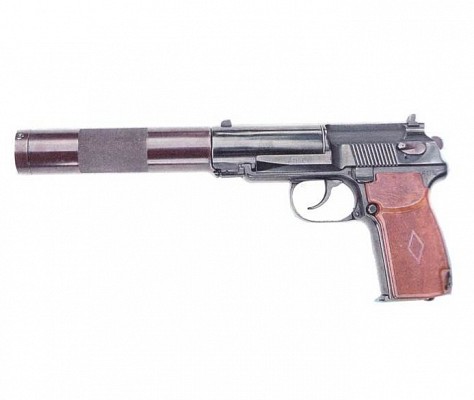 The Makarov PB features an integral suppressor, which can be unscewed to make the pistol more concealable. It is not intended to be fired without the suppressor attached. The PB is a blowback operated pistol. Since the slide is lighter than in the PM, a lever is used to actuate a spring in the pistol grip. This allows the PB to cycle reliably.

The Makarov PB is a semi-automatic pistol that fires the 9x18mm Makarov round. It uses the same 8 round magazine as used in the Makarov PM service pistol. The vent holes in the barrel result in a subsonic muzzle velocity. The effective range is about 25 meters.

The Makarov PB was adopted by various government agencies and special units in the USSR. It was also exported to various Soviet allies. In Soviet service it was supplemented by the PSS Vul, which is smaller and more silent. The Makarov PB remains in service today and reportedly is still in low rate production.

The Makarov PB is based on the Soviet service pistole: the Makarov PM. It uses the same ammunition and magazine.