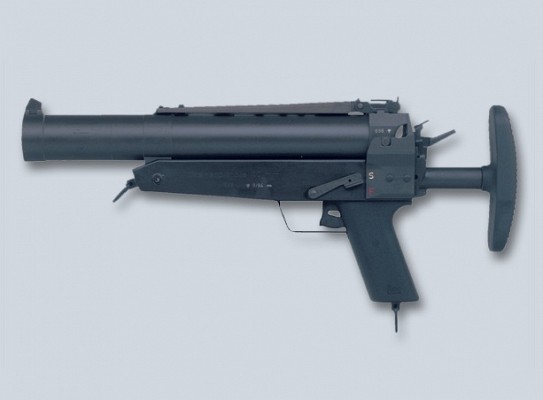 The HK 69 is a grenade launcher of German origin. The HK 69 was developed by Heckler & Koch in the 1970's. It is a standalone grenade launcher for military and law enforcement use. In German military service it is also known as "Granatpistole", which is German for "grenade pistol". A version for law enforcement use is called the MZP-1. This stands for "Mehrzweckpistole 1", German for "multi-purpose pistol 1".

The HK 69 is derived from the HK 79 under barrel grenade launcher, which was developed for use on the Heckler & Koch G3 battle rifle. The HK 69 has a pistol like appearance. The metal frame connects the steel barrel, pistol grip, rear sight and retractable shoulder stock. The rifled barrel is hinged at the front and flips forward for reloading. The standard HK 69 is meant for military use and has a ladder sight for indirect fire. The MZP-1 law enforcement model only has a flip up sight for direct fire.

The HK 69 is a single shot weapon that fires 40x46mm low velocity grenades. Besides the standard high explosive fragmentation rounds a wide selection of other rounds available. As the barrel hinges forwards rounds of any length can be loaded. The rate of fire is about 6 rounds per minute. The maximum effective range of the MZP-1 is 150 meters. The HK 69 can be used up to 150 meters for point targets and 400 meters for area targets.

The HK 69 is used by various nations around the world, but is mostly found in Europe. The MZP-1 is very common for law enforcement in Western nations and is often by used during riots.

Variants of the HK 69

HK 69A1: Stand alone breech loaded 40mm grenade launcher. The HK 69A1 is the military model that can be identified by the ladder sight for indirect fire.

MZP-1: Law enforcement model that lacks the ladder sight for indirect fire. The MZP-1 is also available in 37mm.