A Dutch M113 C&V with its 25mm autocannon turret. The soldiers indicate the small size of this vehicle compared to the original M113.
Source: www.boekje-pienter.nl - © copyright lies with original owner

The M113 C&R is a reconnaissance vehicle of US origin. It was developed in the early 1960's by the FMC Corporation as a private venture for export sales. The official name is "M113 Command and Reconnaissance Vehicle" but the abbreviation M113 C&R and nickname "Lynx" are more common. The M113 C&R was produced in limited quantities since only the Netherlands and Canada adopt it.

To make the M113 better suited in the reconnaissance role the silhouette was reduced by lowering the roofline significantly. In order to achieve this the engine that was normally located above the drivetrain was mounted at the rear. The M113 C&R is much lower and has only four roadwheels whereas the original M113 has five. The crew consists of a driver, commander and observer.

The M113 C&R is armed with a 12.7mm M2HB heavy machine gun in the more intricate M26 mount than the one used on the M113. In Dutch service this mount was replaced with the Oerlikon GBD-ADA turret in the 1970's, providing a massive increase in firepower. The GBD turret mounts the powerful 25mm KBA autocannon which can be used effectively against most armored vehicles.

The M113 has aluminum armor that protects against small arms fire and shell splinters all around. he M2HB can be fired from under armor protection, but must be reloaded in the open. NBC system and smoke grenade dischargers are fitted as standard.

The M113 C&R has a good cross country with its tracked chassis and amphibious capability. The 6V53 diesel engine is the same as mounted on the M113A1. The maximum speed is 71 km/h on roads and 6 km/h in the water. 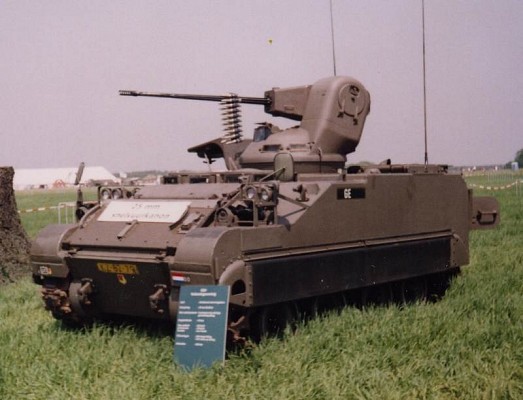 A Dutch M113 C&V during an open day. A section of belted 25mm ammunition is draped over the barrel.
Source: www.militairevoertuigen.punt.nl - © copyright lies with original owner

The M113 Commando & Verkenning is the Dutch version of the M113 C&R of which a total of 266 M113 C&V have been produced. This original version of the C&R has the driver at the front left, the observer at the front right and the commander in the middle behind the other two crewmembers. The commander originally had a standard M113 cupola with 12.7mm M2HB heavy machine gun. In the 1970's at least 250 vehicles have been upgraded with the GBD-ADA one man turret with 25mm Oerlikon KBA autocannon. 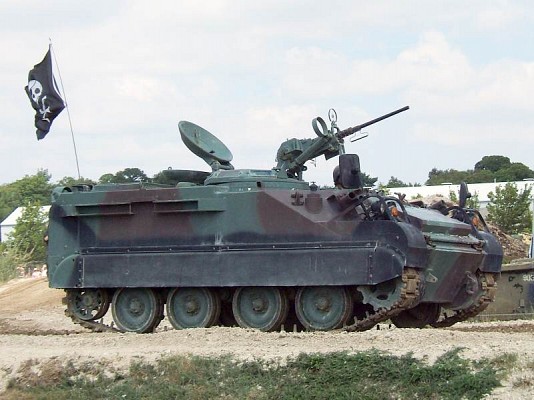 The M113 C&R was derived from the M113, but ended up as a much smaller vehicle with lower roofline and less roadwheels.

The Dutch variant was retrofitted with an overheady weapon system fitted with a 25mm KBA autocannon.

In Dutch service the M113 C&V was replaced by the wheeled Fennek.