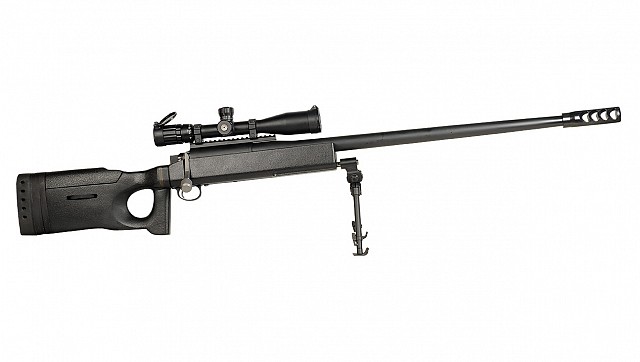 The McMillan M88 is a single shot anti-materiel rifle of US origin. It is one of the earlier types of .50 caliber sniper rifles adopted by US forces.

The M88 is a single shot .50 caliber rifle. It is a lighter variant of the McMillan M87 and was one of the lighter weapons in its class. The M88 has a polymer thumbhole stock. It is a single shot bolt-action rifle with long thick barrel with large muzzle brake. Ergonomics are poor by current standards. Late production models feature an adjustable stock, Picatinny optics rail and smaller multi-baffle muzzle brake.

The M88 fires the 12.7x99mm NATO round. Rate of fire is limited since it is a single shot bolt action rifle. Effective range is about 1.5 km. In media coverage about Navy SEALs a range of 3000 yards has been quoted.

The M88 is known for having been in service with the US Navy SEALs. Apparently the M88 was also acquired by the British SAS and French foreign legion.