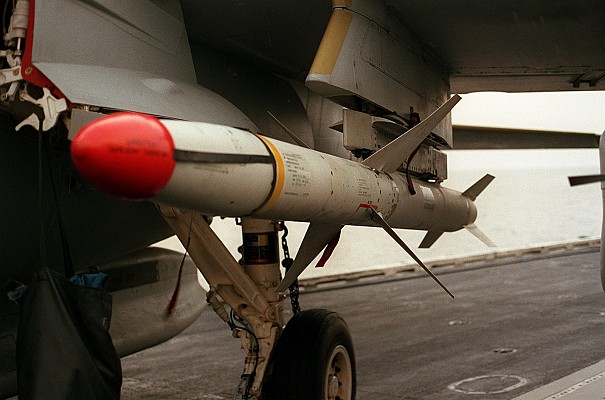 The AGM-88 HARM is an anti-radiation missile of US origin. It was developed in the early 1980's to replace the earlier AGM-45 Shrike and AGM-78 Standard ARM in US military service. The HARM is a more capable and versatile missile than its predecessors and has received various physical and software updates to match new radar technology.

The HARM uses a passive radar homing seeker. The seeker homes in on the radar signals emitted from an enemy radar. A dual thrust smokeless solid propellant rocket motor provides the HARM with supersonic speed and a standoff range against most air defense systems. A large blast fragmentation warhead

The HARM was acquired by both the US Navy and the Air Force. Many nations in NATO and nations with good diplomatic ties to the USA have acquired the HARM. It is used on a multitude of modern fighter aircraft, including the F-16, F/A-18, late model F-15's and the Tornado.

Variants of the HARM

AGM-88A
Initial production model. Operational since 1985, but pre-production models available as early as 1983. Known as AGM-88 Block I before redesinated as AGM-88A. Produced until replaced by the improved AGM-88B in 1987.
AGM-88B
Incorporates the Block II update, comprising of improved passive seeker with new software. Introduced in 1987. Block III update introduced in 1990 allows for software preset to be selected before deployment, instead of in the factory. A recent modification is known as Block IIIB and is practically and AGM-88D with the older type warhead. The Block IIIB update adds a GPS receiver for improved targeting of radars switching off, plus various software updates.
AGM-88C
Variant introduced in 1993, also known as Block IV, with new warhead and seeker. The new WDU-37/B warhead creates 12.800 wolfram fragments instead of the 25.000 steel fragments in the older WDU-21/B. The seeker has also been upgraded. It scans a wider frequency range and has a better signal processor. Software was later upgraded to Block V standard.
AGM-88D
The AGM-88D incorporates the Block VI update, which was developed by the USA, Germany and Italy. This update adds a GPS receiver for improved targeting of radars that switch off when an anti-radiation missile is inbound. Also various software updates from the Block V are included. When the Block VI update is applied to the AGM-88B it is known as AGM-88 Block IIIB.