The M11-87 is a shotgun of US origin. It was developed by Remington in the 1980's and is an improved version of the M1100 semi-automatic shotgun. The M11-87 is popular for its semi-automatic fire and limited recoil. The drawback is that it is more expensive and in some aspects less reliable than a pump action model.

The M11-87 is an improved M1100. The M11-87 uses the same gas operation but has a chamber that will also accept 3 inch magnum shells. The police models are fitted with shorter barrels than the civilian models and feature magazine extensions. All police models have black synthetic furniture and a rubber recoil pad. Most police models also feature ghost ring sights, but standard sights or rifle sights are common as well.

The M11-87 fire 12ga shotgun shells with a length of 2.75 or 3 inch. Depending on the length of the model and if a magazine extension has been installed the tubular magazine under the barrel has a capacity of 4 to 7 rounds. The M11-87 is semi-automatic and has no pump action ability. As a result low powered rounds will not cycle. Since the gas operation increases recoil duration the felt recoil is significantly reduced. Combined with semi-automatic loading it allows for quick and accurate follow up shots. Models with rifled barrel for slug firing are also available.

The M11-87 is widely used by police and other law enforcement units in the United States and in some other nations. With the introduction of newer semi-automatic shotguns such as the Benelli Super 90 series the competition for the M11-87 has grown significantly. 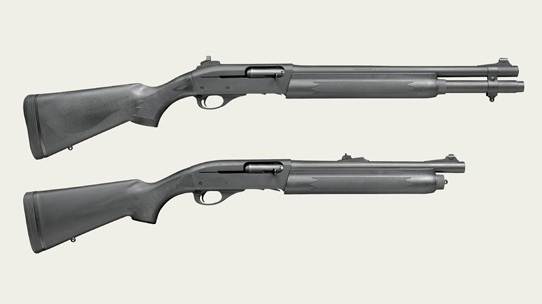