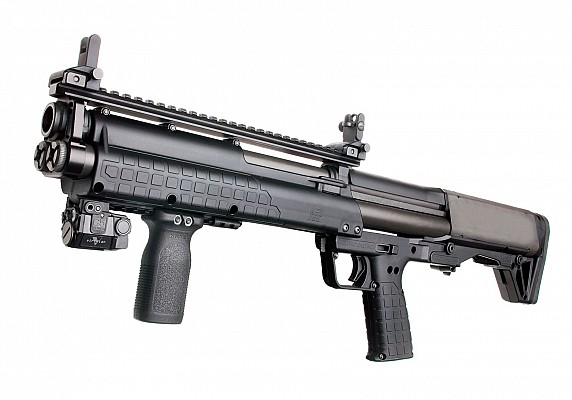 The KSG is a pump-action shotgun of US origin. The KSG is a futuristic looking shotgun introduced in 2011. The KSG has a novel design with two tubular magazines and bullpup layout. For a design with these features the KSG is rather practical, which cannot be said for many shotguns that depart from proven designs.

The KSG is an unusual design in two aspects. First of all it has a bullpup design, resulting in limited overall length. Second, the KSG has two tubular magazines located side by side under the barrel. The uses selects from which tube the gun feeds. This allows for two types of shell to be carried in the weapon. However, a shell in the chamber is not easily switched out. For a mixture of lethal and non-lethal ammunition two different shotguns might still be preferred since there is no clear indication of the exact type of ammunition in the chamber.

The KSG fires 12ga shotgun shells. Standard 2.75-inch shells and 3-inch Magnum shells can be fired. Each tubular magazine holds 7 standard shells or 6 Magnum shells. This allows for 15 shells in the weapon. A feature not replicated by most shotguns without using a large drum magazine.

The KSG is aimed at the US civilian market and for law enforcement use. The KSG is in use in the United States. Various foreign units acquired small quantities of the KSG. These include nations such as France and South Korea.

The first variant to be introduced and is still the most common variant. This features 7-shot tubular magazines. The slider can be used by hand. The Picatinny rail allows for a light and/or vertical grip to be fitted.

The Tactical variant was introduced several years after the regular model. The Tactical model features a shorter barrel and 5-shot tubular magazines. The slider is a vertical grip with integrated light. The top rail is best used with a reddot sight since sight radius is limited with mechanical sights.