The D-44 is an early cold war era divisional gun of Soviet origin. As such it is intended to be a multipurpose a field artillery piece. It mainly serves in a direct fire role against both tanks and unarmored targets. An alternative use is as a light artillery piece. The D-44 was developed just after to replace the older 76mm ZiS-3. During World War 2 the ZiS-3 was used in large numbers in a similar multi-purpose role.

The D-44 is based on a two wheel split trail carriage. The 85mm rifled gun is derived from the main gun used in the T-34-85 tank, for which large stockpiles of ammunition were available in the Soviet Union. The 85mm gun was made longer and a double baffle muzzle brake was added. A gun shield provides a degree of protection for the crew of 8. The D-44 served as the basis for the D-48 anti-tank gun, which is far

The D-44 is towed by a 2.5 t truck. Larger trucks such as Ural-375D and ZiL-131 or Ya-12 tractor can be used as well. The D-44 can be moved by its gun crew over short distances. Towed speed is 55 km/h on asphalt roads about 25 km/h on dirt roads and 11 km/h in the field. For airborne troops a variant with auxiliary power unit was developed. This allows for autonomous movement over intermediate distances.

The D-44 fires both HVAP and HEAT rounds for use against armored targets. Direct fire range is 1.5 km, although the maximum range of the HVAP rounds is listed as 1.150 meters. Maximum rate of fire is 20 to 25 rounds per minute for a short duration. In practice the rate of fire is closer to 15 rpm. Penetration of the HVAP rounds is 100 to 180 mm steel at 1 km, depending on type of rounds. the BK-2M HEAT-FS round can penetrate 300 mm RHA. Standard issue was 120 rounds per gun, of which 102 are HE-Frag and 18 are a mix of HVAP-T and HEAT-FS shells for use against armored targets.

The D-44 was produced in large numbers, with over 10.000 produced. It was a common piece of equipment in Soviet and Warsaw Pact forces in the early Cold War era. With many D-44 replaced by the 100mm T-12 anti-tank guns or 122mm D-30 howitzers, many were exported to Soviet allies all over the world. The D-44 was used in various conflicts in the Middle East, Africa and during the Vietnam war. D-44
Standard and most numerous model. First introduced in 1944.
Type 56
Chinese production model of the standard D-44.
SD-44
Variant of the D-44 with auxiliary power unit developed for airborne forces. The M-72 engine is derived from a motorcycle engine and produces 14 hp. A wheel is added where the two trails connect, which can be steered by the driver seated on the trails. A 10 ammunition round box is fitted on the trails.
D-44N
Variant introduced in the 1960's with night vision equipment. This upgrade package for existing D-44 adds the APN 3-7 night vision system consisting of an infrared search light, power source and associated sight unit. 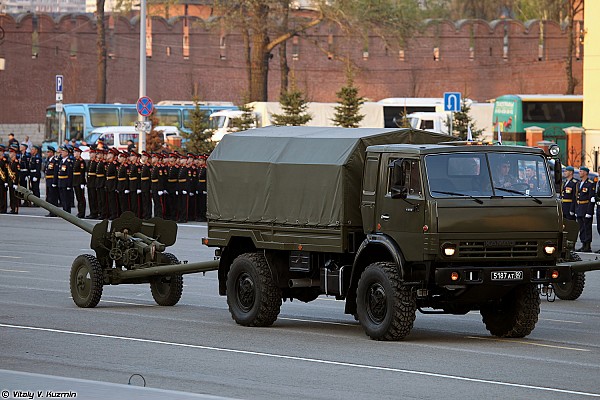 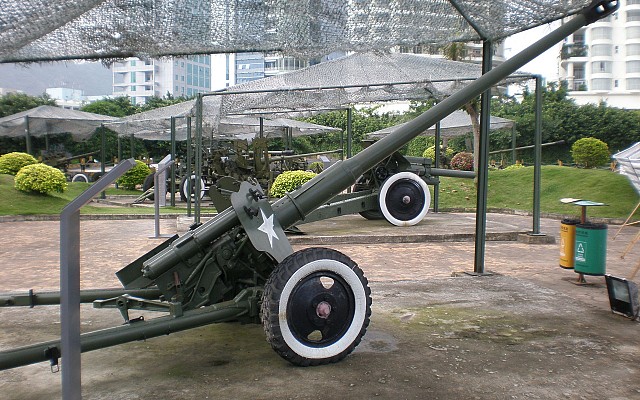 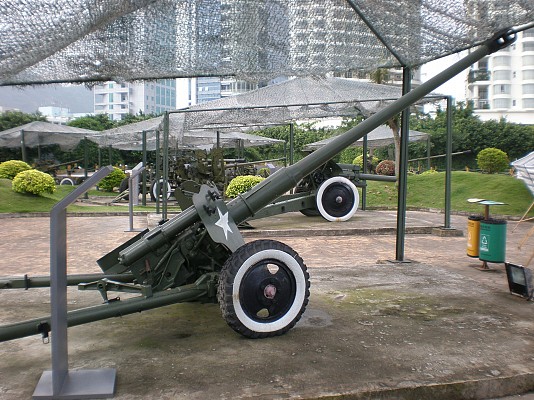 Right side view of Chinese Type 56. 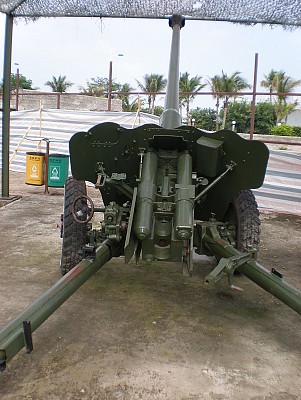 85mm D-44 used in a training course for Ukrainian artillery crewmen in 2016. 85mm D-44 divisional gun on display in a museum in Israel. 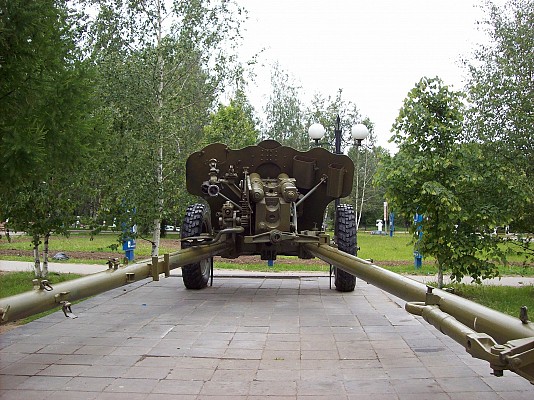 85mm D-44 divisional gun on public display as a monument. The D-44 was developed as more potent replacement for the ZiS-3, which was used in large numbers during World War 2. The D-48 is a dedicated anti-tank gun based on the D-44 design. It has the same 85mm caliber, but the shells are larger and hold much more propellant.