The P-120 is an anti-ship missile of Soviet origin. It was developed in the 1960's as a replacement for the P-5 Pityorka (NATO: SS-N-3 Shaddock) missile. The design is based on the P-70 Ametist (NATO: SS-N-7 Starbright). Unlike the P-70, the P-120 can be launched from both surface vessels and submarines, making it a multi-purpose missile.

The P-120 is based on the design of the P-70 and has a similar layout. The P-120 differs in being longer and larger to carry more fuel in order to reach the desired maximum range of at least 100 km. The radar seeker is mounted in the nose and a infrared seeker is mounted in a ventral pod. The main wings are folded within the launch container. A booster engine on each side provides initial velocity upon launch. They are discarded when depleted. At that moment the solid fuel engine takes over.

The P-120 is fed with target information via the ship's radar or sonar system. During the first stage of the flight inertial navigation is used. The nose of the missile houses an active radar seeker. There is a ventral pod located underneath the body that houses an infrared seeker. The P-120 relies on the combination of optical and radar input to distinguish the target vessel among countermeasures.

The P-120 is fitted with either a 500 kg HE warhead or a 200 kT nuclear warhead, with the latter being the least common version. The maximum range is 110 km when launched from a surface vessel of 70 km when launched from a submerged submarine. Maximum ranges of 120 km and 150 km are quoted but are probably incorrect. The flight speed is around Mach 0.9. Flight altitude is about 200 meters above sea level and about 40 meters in the terminal phase.

The P-120 became operational in 1972 on the Project 1234 Ovod (NATO: Nanuchka I) class corvettes. Later, the improved Project 1234.1 (NATO: Nanuchka III) was also fitted the P-120. In 1977 the P-120 became operational with the Project 670M Skat-M (NATO: Charlie II) submarine, of which 6 were built. The usual mix being 6 conventional warheads and two nuclear ones. The P-120 was also used on the experimental Project 1240 Uragan (NATO: Sarancha) class missile boat, of which only a single unit was built.

The P-120 missile was only used by the USSR and was not exported. After the collapse of the USSR all P-120 remain in Russian navy service. With the retirement of all Charlie II class submarines the P-120 only remains on use on the Nanuchka III corvettes. It is reported that a P-120 missile was succesfully used against a Georgian vessel during the 2008 conflict. 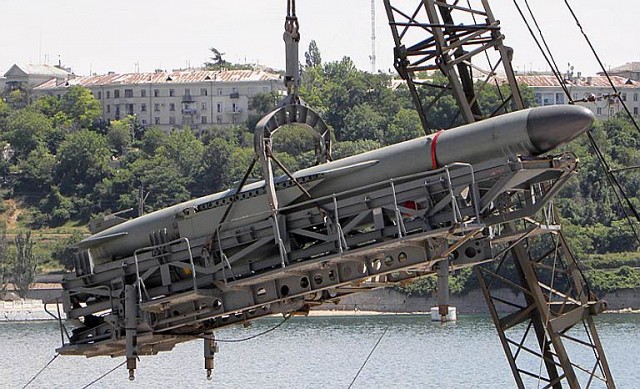 Side view of P-120 Malakhit being loaded onto a ship.
Source: Black Sea Fleet website - © copyright lies with original owner

The P-120 Malakhit was produced in only one version that could be used both on surface vessels (4K86) and submarines (4K85). It was fitted with either a 500 kg HE warhead or a 200 kT nuclear warhead.

The P-120 was derived from the earlier P-70 Ametist (NATO: SS-N-7 Starbright). It can be distinguished from the P-70 by its increased length, larger wings, two large boosters instead of four smaller ones and the ventral pod housing the infrared seeker. 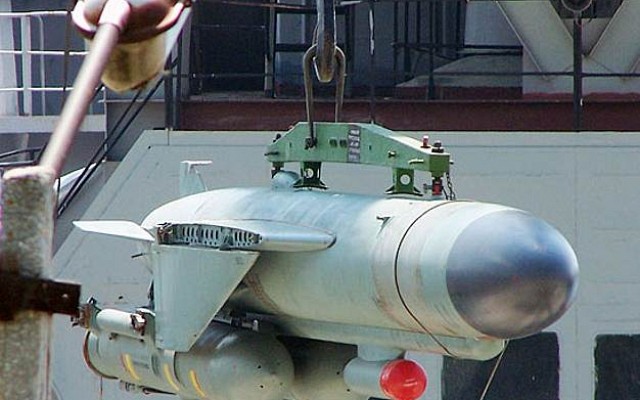 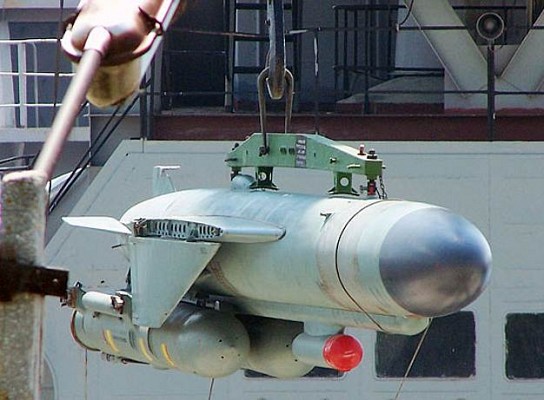 Forward view of P-120 Malakhit being loaded onto a ship. 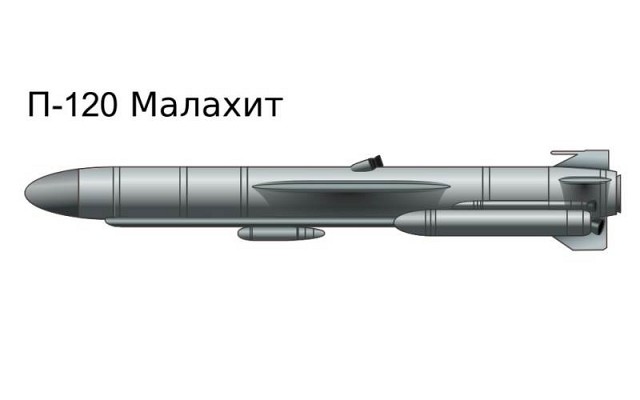 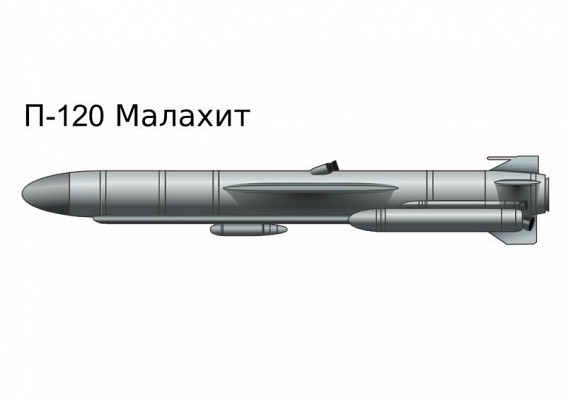 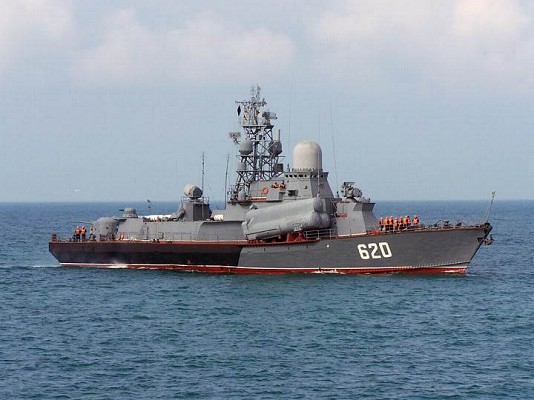 Forward view Russian navy Project 1234.1 (Nanuchka III) with its distinct three round launchers for the P-120. 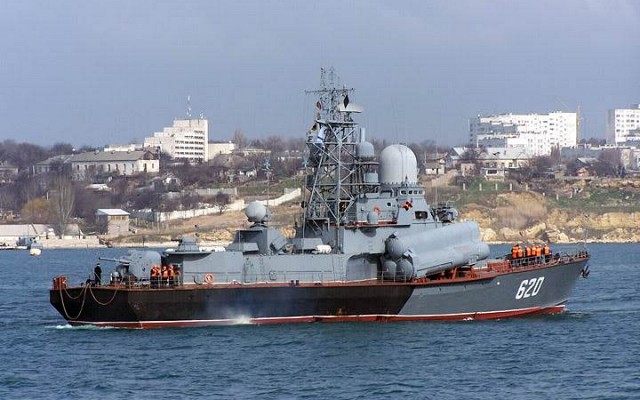 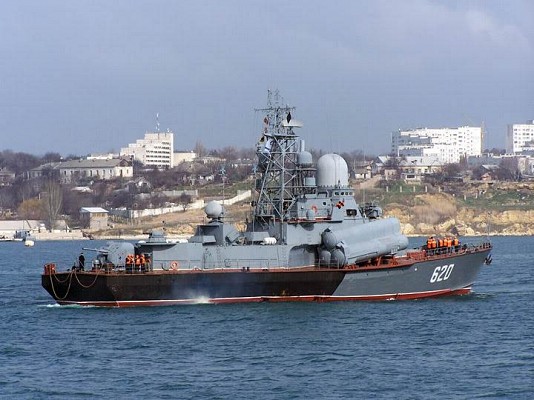 Rear view Russian navy Project 1234.1 (Nanuchka III) with its distinct three round launchers for the P-120. 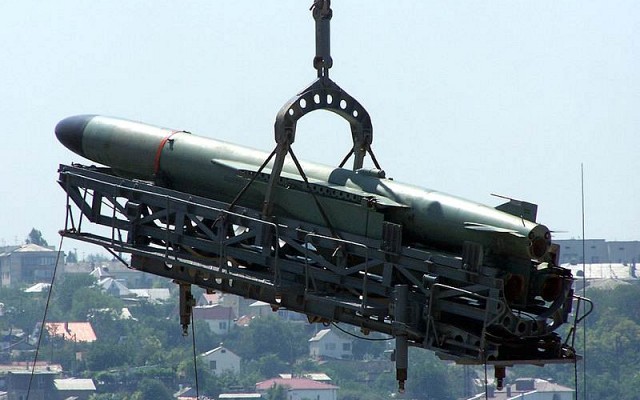 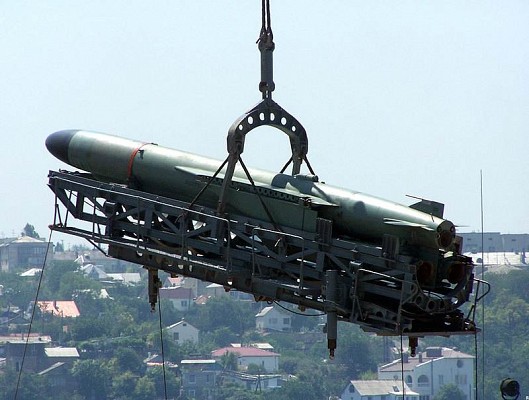 Rear view of P-120 Malakhit being loaded onto a ship. 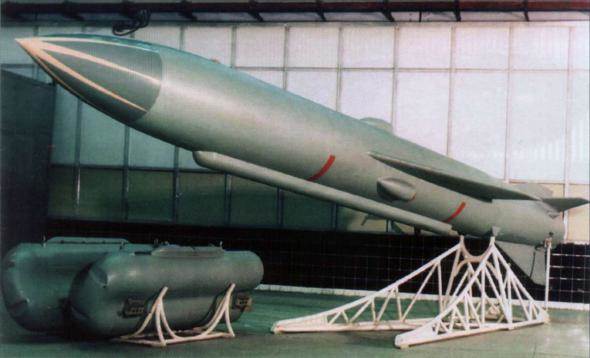