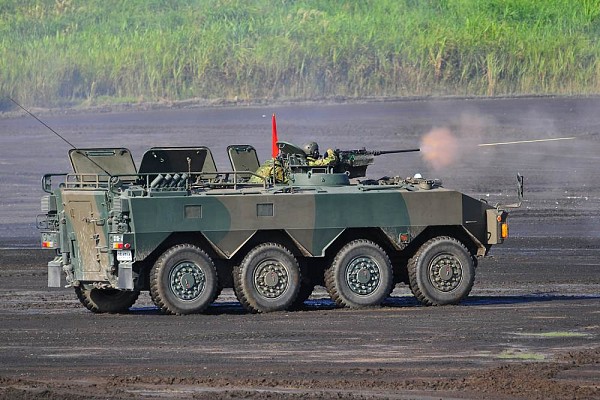 The Type 96 is a modern armored personnel carrier of Japanese origin. It was designed to supplement and partially replace the fleet of tracked APCs in Japanese service. The Type 96 features design elements from the Type 82 and Type 87 6x6 armored reconnaissance vehicles.

The Type 96 has a classic wheeled APC layout. The driver and commander are seated in tandem on the right of the engine. The troop compartment makes up the rear of the vehicle. It seats 8 soldiers and can be accessed through the roof hatches and rear ramp.

The Type 96 is armed with either a 40mm Type 96 automatic grenade launcher or 12.7mm M2HB heavy machine gun. Either weapon is mounted on the commander's cupola and can be fired under full armor protection.

The 8x8 chassis provides very good mobility on roads and good mobility in all but the most difficult terrain. Steering is over the four forward wheels and a central tire pressure system is fitted. The 360hp Mitsubishi diesel engine provides a maximum road speed of 100 km/h.

Like all Japanese military production the Type 96 is only used by Japan and is not available for export. The Type 96 was adopted in 1996, but series production commenced after 2001. A total of 500 vehicles was planned to be acquired. A total of 381 were produced by 2016. 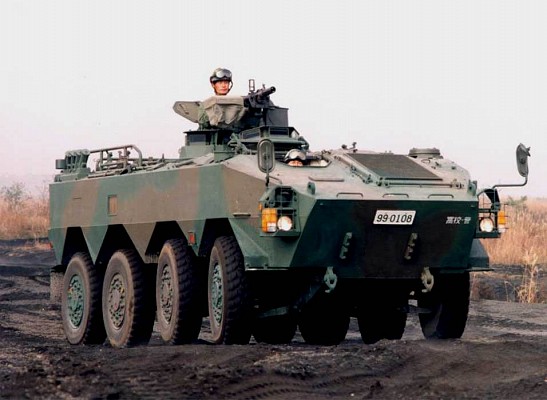 Variants of the Type 96

The Type 96 is a conventional 8x8 armored personnel carrier. It can be distinguished from foreign models by the large flat vertical sides. Unlike foreign 8x8 APC designs the Type 96 doesn't have a large number of variants. The models that do exist feature only minor differences.

Type 96, Type A
Standard armored personnel carrier version used to transport infantry on the battlefied. The Type A version is armed with the 40mm Type 96 automatic grenade launcher.
Type 96, Type B
The Type B model is virtually identical to the Type A except for the armament. The Type B features a 12.7mm M2HB heavy machine gun. Reportedly the production ratio between Type A and B is 10 to 1.
Type 96, NBC variant
NBC reconnaissance version to supplement chemical reconnaissance variant of the Type 82. Carries special equipment and specialists instead of infantry. 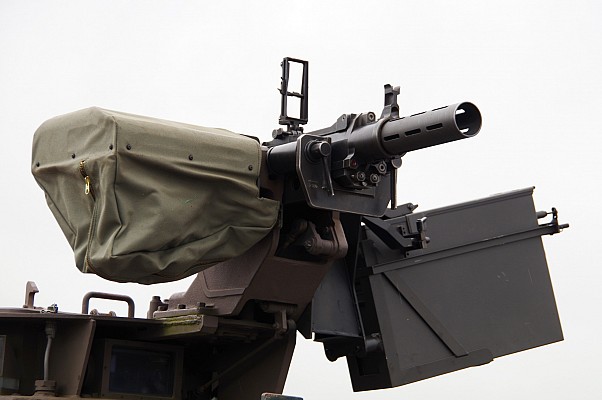 Automatic grenade launcher firing the 40x53mm NATO high velocity grenade. Used on the Type A variant of the Type 96.

12.7mm heavy machine gun used on the Type B variant of the Type 96. Left side view of Type 96 with armored wind screens for the driver. 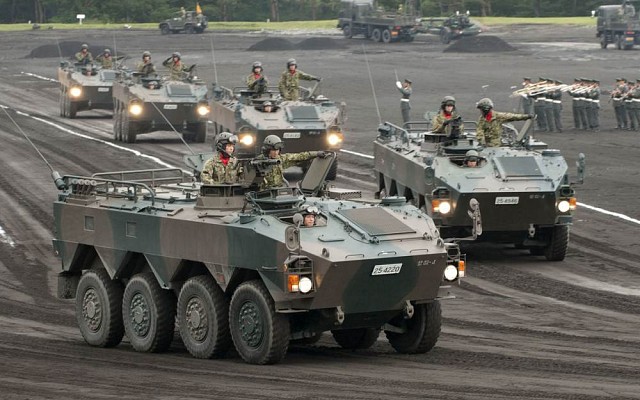 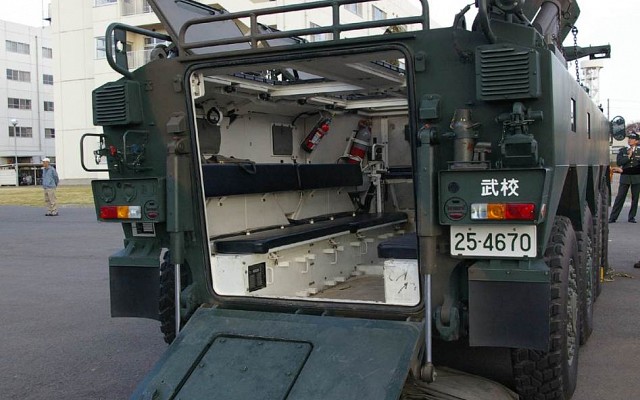 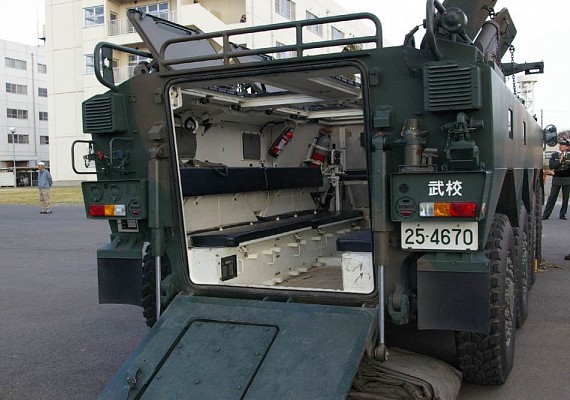 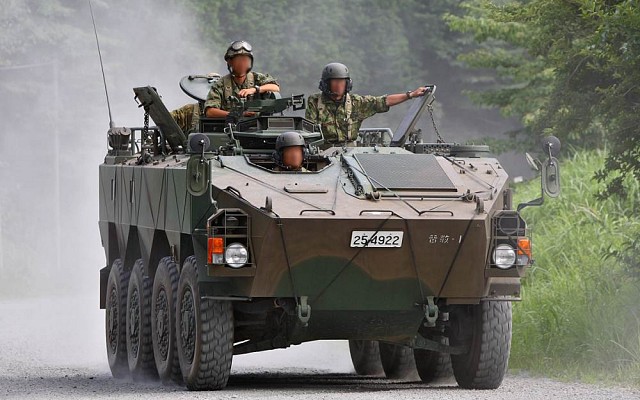 Forward view of Type 96 on the move. 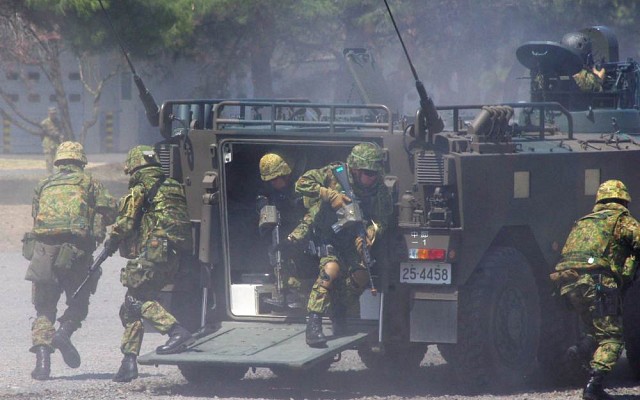 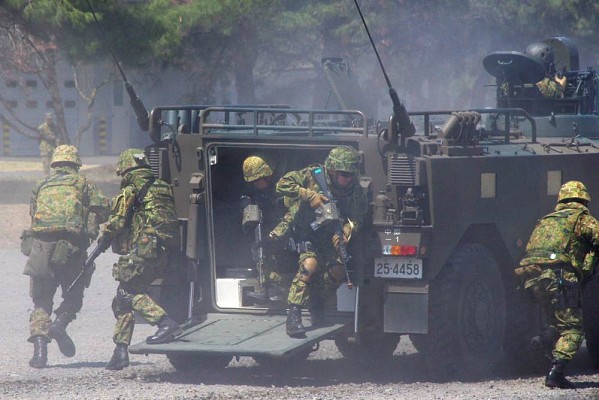 Infantry disembarking from the Type 96. Right side view of Type 96. 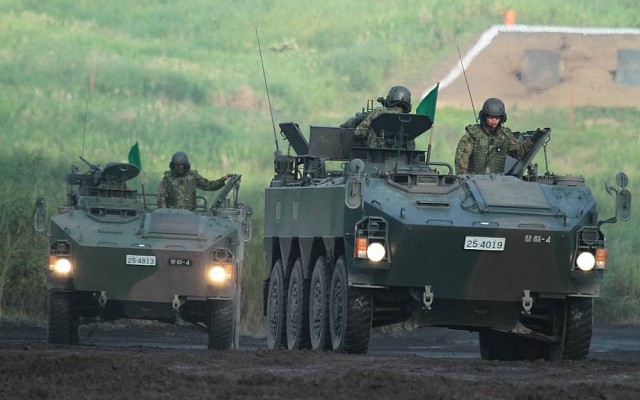 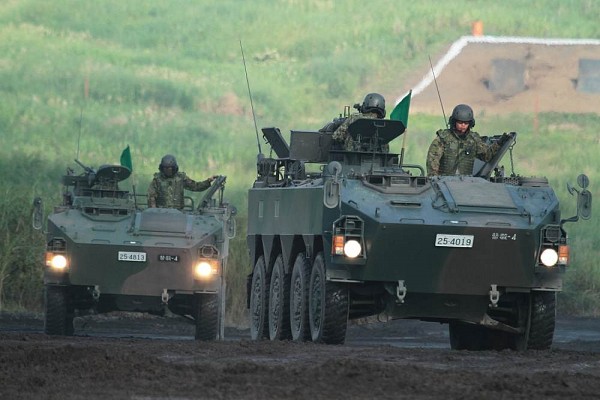 Forward view of Type 96 in the field.