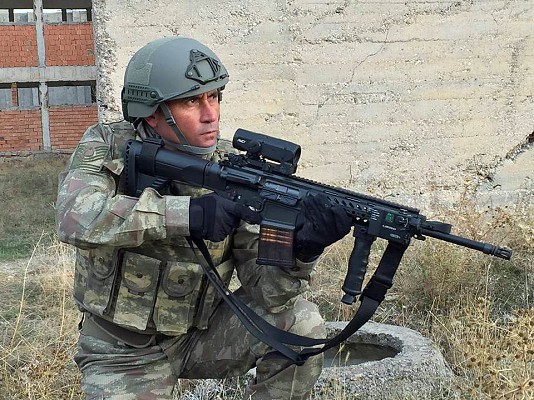 The MPT-76 is a modern battle rifle of Turkish origin. It was developed in the late 2000's by MKEK as a next generation service rifle for Turkish use. The design of the MPT-76 is based on an earlier prototype weapon, the Mehmetcik-1. This was in turn inspired by the German HK 416 assault rifle.

The MPT-76 is a gas operated weapon that uses a short stroke gas piston and a rotating bolt. Overall the MPT-76 can be considered an AR-15 type rifle with visual similarity to the HK 417. It features a quad Picatinny rail on the forearm and a retractable polymer stock. A removable carry handle and polymer angled grip in front of the magazine well give the MPT-76 a distinctive appearance.

The MPT-76 fires the 7.62x51mm NATO round from a 20 round magazine. It is a select-fire rifle, although the recoil of its caliber makes full automatic fire of limited use. The cyclic rate of fire is 650 rpm. The MPT-76 is produced in three barrel lengths, with the longest one for use in the designated marksman role.

The G3 was the standard issue rifle in Turkish service for many decades, and remains in use today.