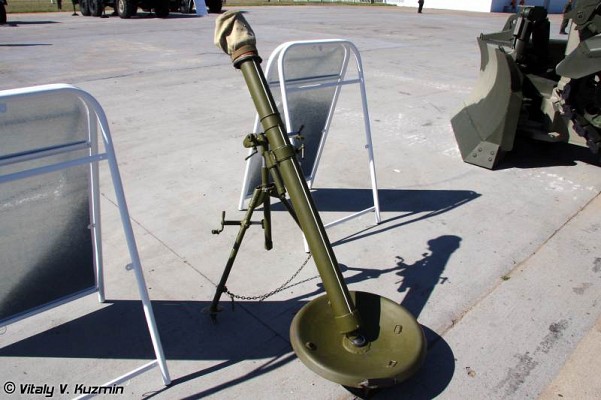 The 2B14 Podnos is a smoothbore 82mm mortar of Soviet origin. It was developed in the 1980's to replace the World War 2 era PM-37 in Soviet service. The 2B14 is lighter and has a better range.

The 2B14 has the same general layout as the PM-37, but is an entirely new development. The use of high strength materials makes it a lot lighter than the PM-37. It consists of a barrel with muzzle safety device, round baseplate and bipod with sight assembly.

The 2B14 is able to fire the same 82mm shells as used in the PM-37, but a newer range of ammunition has been developed for the 2B14 as well. With new ammunition the maximum range is 4.3 km. The maximum rate of fire is 24 to 30 rounds per minute.

The 2B14 can be disassembled in three loads that can be transported by infantry over short distances. It is significantly lighter than the older PM-37 mortar.

The 2B14 is used in large numbers by Russia and several Eastern European nations. Export sales have been limited as the older PM-37 suffices for most users.