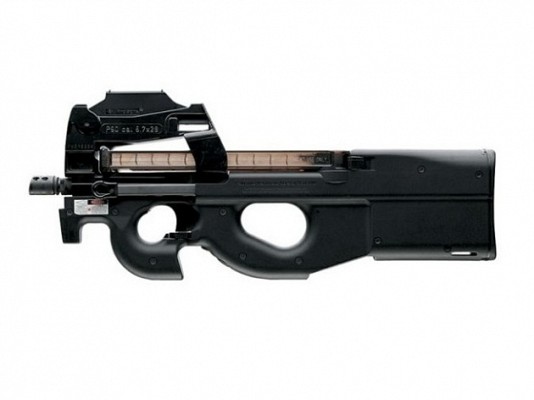 The P90 is a modern sub machine gun of Belgian origin. It is known for its unique design and for one of the first sub machine guns classed as a personal defense weapon. It was developed in the early 1990's by Fabrique Nationale as a personal defense weapon for rear echelon military troops. The P90 was to be compact and easy to use with limited training. At the same time it was intended to be able to pierce the body armor of potential Soviet Spetsnaz forces operating behind enemy lines. Due the end of the Cold War the P90 ended up as

The P90 is a sub machine gun with a unique bullpup design. It fires the 5.7x28mm round from a 50 round translucent magazine that lies on top of the weapon. A feed chute in the magazine rotates the rounds 90 degrees before entering the weapon. The bullpup design results in a compact weapon. The weapon is mostly made out of polymer. A non-magnifying optical sight is fitted since the compact design leaves hardly any room for mechanical sights.

The P90 fires the 5.7x28mm round from 50 round magazines. This 5.7mm round was developed specifically for use in the P90. These rounds are known for their armor piercing capability, but are somewhat less effective against unarmored targets compared to modern pistol rounds. The P90 is capable of semi-automatic fire and automatic fire at a cyclic rate of fire of 900 rounds per minute. The maximum effective range is quoted as 200 meters.

The P90 was never acquired in its intended role as a military firearm for large scale rear echelon use. However, the P90 has been sold to a large variety of special forces and law enforcement units around the world. In the USA it was acquired by over 200 law enforcement agencies. The P90 was used in several operations, such as the 1997 Peruvian operation to end the Japanese embassy hostage crisis. The P90 remains available today. In the last decade it seems that the H&K MP7 has been gaining ground over the P90. 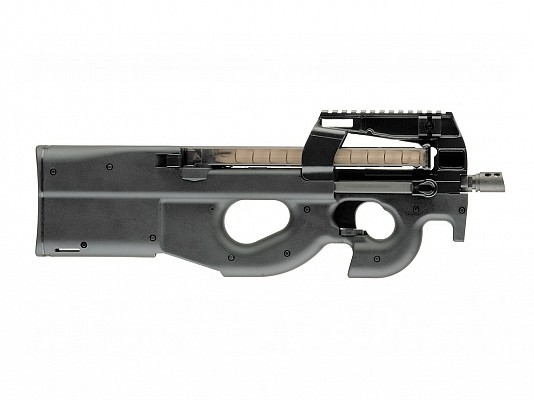 The P90TR is similar to the original P90 except for the sight unit. TR stands for Triple Rail as instead of the integrated sight three Picatinny accessory rails are fitted. This allows various optics and attachments such as lasers and lights to be fitted. In the mid 2000's the designation was changed into P90 Tactical. The P90TR is also available as the P90LV and P90LIR with an integrated visible laser and IR laser respectively. 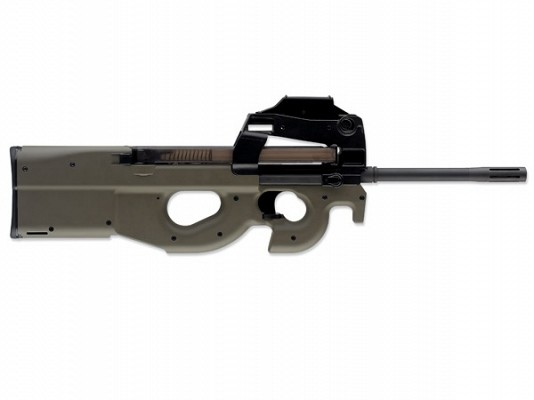 The PS90 is a civilian model of the P90 that was developed for the US civilian market. It was introduced in 2005. The PS90 is semi-automatic only and has a much longer barrel that extends from the weapon. The standard 50 round magazine can be fitted, but the PS90 is only sold with 10 or 30 round magazines. The PS90 is available with the Standard, USG and TR sight units. 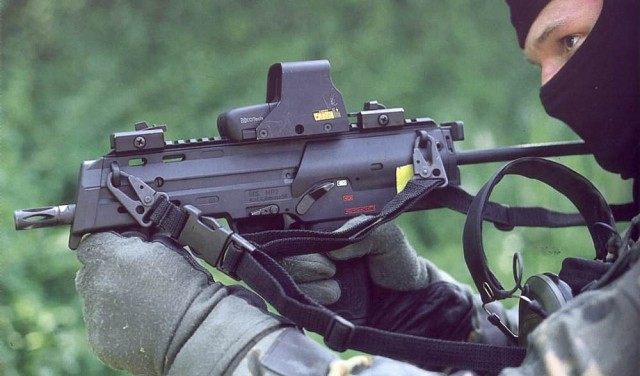 The German MP7 is a direct competitor to the P90 since both fire a quite similar small caliber high velocity round.