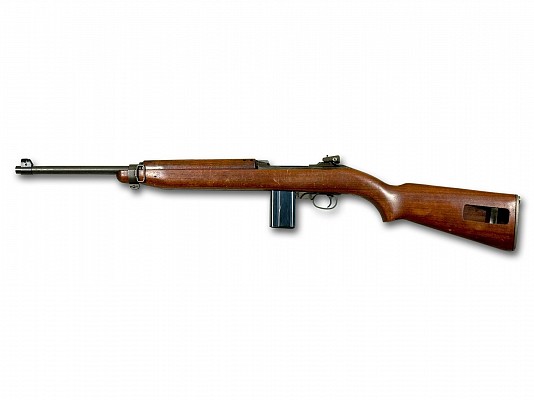 The M1 Carbine is a World War 2 era self-loading rifle of US origin. It was developed during the early stages of World War 2 to provide US forces with a weapon that filled the gap between a sub machine gun and a full size rifle. It was deemed that many frontline troops that are not riflemen could use weapon that was less cumbersome but yet adequate for combat. These roles include officers, engineers and drivers. In a sense the M1 Carbine was the first dedicated "personnel defense weapon" design, an idea that would be revisited in the 1990's.

The M1 Carbine is based on the Winchester M2 rifle designed by John Browning. The Browning design was finished by David Williams who started to develop a short stroke gas piston design. The M1 Carbine is gas operated and uses a tapped-and-slide gas mechanism. Externally the M1 Carbine looks like a classic rifle with its wooden furniture and lack of a pistol grip. The .30 Carbine round used in the M1 Carbine was specifically designed for this weapon. Unlike most intermediate power rounds developed in World War 2 the .30 Carbine is not of a spitzer design.

The M1 Carbine is a semi-automatic weapon that fires the intermediate power .30 Carbine round. At first only the 15 round magazine was available. With the introduction of the select-fire M2 Carbine the 30 round magazine was introduced. The M2 has a high cyclic rate of fire of about 900 rpm. The maximum effective range is 200 to 300 meters. Most M1 Carbines have an accuracy of 3 to 5 MOA, which is adequate at such ranges. 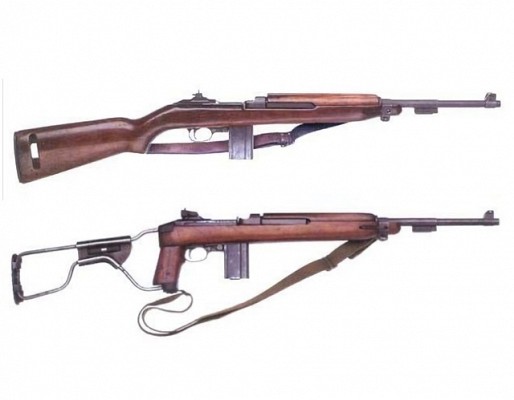 Original M1 Carbine and the M1A1 paratrooper variant shown side by side.
Source: US DoD - © Public domain

M1 Carbine
The M1 Carbine is the original and most produced version. Several million of these carbines were produced. The M1 is semi-automatic and has a fixed wooden stock.
M1A1 Carbine
The M1A1 was developed for airborne troops needing a more compact weapon. It is a M1 that is fitted with a metal skeleton folding stock.
M2 Carbine
The M2 is a select-fire version of the M1 Carbine. The M2 also introduced 30 round magazines that are compatible with the M1 Carbine. The M1 could be converted into the M2 with the use of a parts kit.
M3 Carbine
The M3 is an M2 fitted with an infrared searchlight and infrared scope. These cumbersome kits were intended to arm special operations forces. The M3 was produced in very limited numbers. 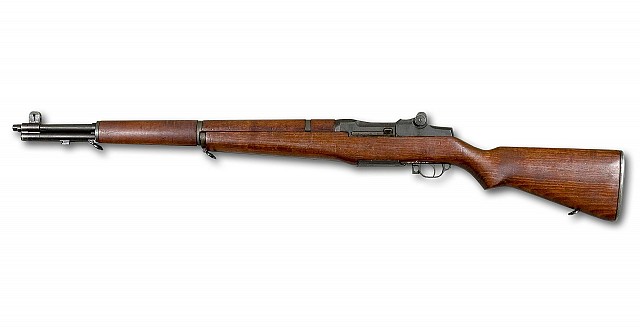