The Ameli is a machine gun of Spanish origin. It was developed in the 1970's by CETME and adopted in the early 1980's. Ameli is short for "Ametralladora ligera", which is Spanish for "light machine gun".

The Ameli looks like the MG3 from the outside, but is very different internally. It uses the roller delayed blowback mechanism that is also employed in the Model 58 and Model L rifles. Belt boxes can be attached to the weapon and feature a translucent rear cover to indicate the remaining amount of ammunition.

The Ameli fires the 5.56x45mm NATO round from 100 or 200 round disintegrating link belts. The only setting is fully automatic fire at 900 rpm.

The Ameli is the standard light machine gun of the Spanish military. It has been exported to Mexico and saw some other limited sales. 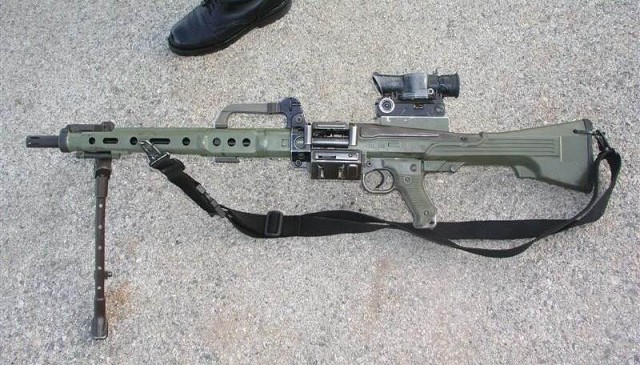 The Ameli is a light machine gun that fires the 5.56x45mm NATO round from linked belts. The Ameli uses the roller locked delayed blowback system that is also used in the Spanish CETME Model 58 and German Heckler & Koch G3 battle rifles.

There are no variants other than the baseline model. Some Ameli have been fitted with the British SUSAT sight for improved effectiveness at longer ranges.