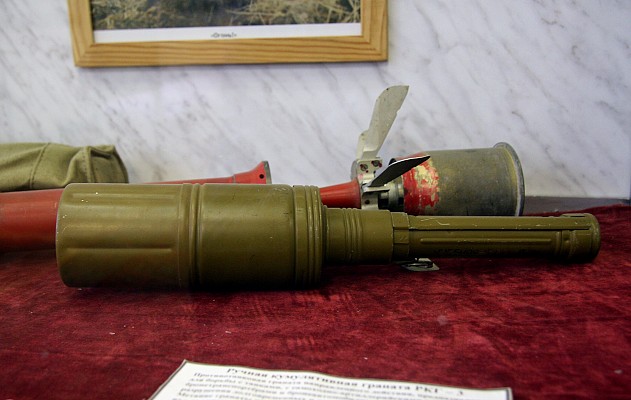 The RKG-3 has the same layout as its predecessors. It consists of a shaped warhead on a stick. A four paneled fabric drogue is folded into the stick and is released by a spring. The drogue makes sure that the shaped warhead is pointed in the direction of the armor. It makes it also possible to throw the grenade in an arc on top of the weaker roof armor of the target. When the safety pin is removed and the grenade is thrown the spring pushes the drogue out of the stick. The pull disconnects the internal safety device and arms the warhead. The warhead is set off instantaneous on impact.

n Russia, China and Eastern Europe the RKG-3 replaced all previous anti-tank grenades. Only the RPG-6 was sometimes retained to be used as a life training round or for use against infantry. In the rest of the world, especially the Middle East and Asia, it was used in large numbers besides other anti-tank grenades. The RKG-3 and its variants were used extensively by the Arab forces in the 1973 October War. For many years the RKG-3 is no longer in production and with the widespread use of rocket launchers such as the RPG-7 there is no need for anti-tank grenades anymore. 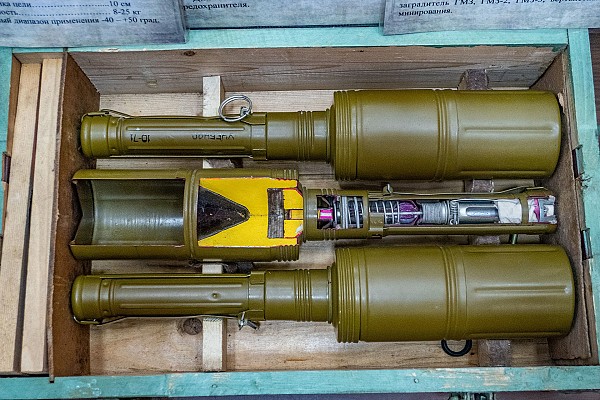 Wooden box with three RKG-3 series anti-tank grenades on display in a museum. The center grenade is a cut-away model showing the design of the warhead and retarding parachute.
Source: Homoatrox - © GNU Attribution - Share Alike license

RKG-3
The original RKG-3 was formally adopted by Soviet forces in 1950. This is one of the most modern, complex and effective anti-tank grenades designed during the Cold War.
RKG-3M
The RKG-3M is an improved model with a longer warhead that increases the overall length. It uses a more effective copper liner instead of a steel one, increasing penetration over the original RKG-3 by one third. Also known as RKG-3E for export.
RKG-3T
A further improved RKG-3M with a different cone liner, increasing penetration by modest amount to 170 mm RHA.
RKG-3EM
Export model with longer and larger warhead. This has an increased weight of 1.7 kg but penetrates up to 220 mm RHA.
UPG-8
There is a training round designated UPG-8. UPG stands for Uchebnaya Protivotankovaya Granata, which is Russian for training anti-tank grenade.