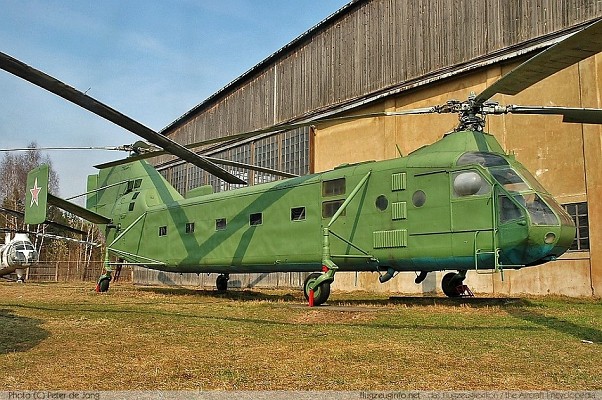 The Yak-24 is an early Cold War era transport helicopter of Soviet origin. It was produced in the late 1950's to provide more cargo carrying capacity than the Mi-4 Hound. It was the first and last attempt of the Yakovlev design bureau to develop a helicopter. Despite breaking various records it was an unsuccessful design. With the introduction of the much more capable Mi-6 the Yak-24 was soon forgotten.

The design of the Yak-24 is very basic and straightforward. A long box shaped chassis makes up the airframe. The landing gear is fitted to large struts at the front and back. A set of tandem rotors at the front an back provide lift. Two Shvetsov ASh-82V radial engines provide power to the rotors, each engine being able to provide power to both rotors. Despite using the proven rotors and engines of the Mi-4 Hound the Yak-24 proved to mechanically unreliable. The Yak-24 was intended as troop transport and was not armed. The Yak-24 was a very basic design and did not feature any special avionics or sensors. Operating it at night would have been very hard, if not impossible.

The first versions of the Yak-24 could carry 30 troops, 18 stretchers or 3 t of cargo. The improved Yak-24U could carry 40 troops or 3.5 t of cargo. The large airframe allowed for 2 GAZ-69A or light anti-tank guns to be carried. The latest Yak-24A was also used as a flying crane and could lift up to 5 t of external cargo.

The tandem rotor setup made the Yak-24 hard to fly. The powerful engines provide enough power to reach a speed of 195 km/h with a limited amount of cargo. The range is a modest 430 km. 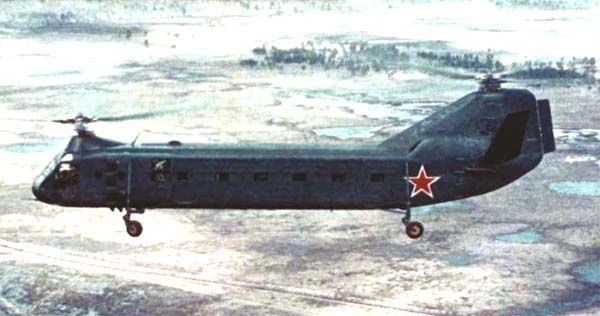 Yak-24
Early production model built as prototypes and small production run. Was shown to have vibration issues during testing.
Yak-24U
Improved variant introduced in 1957. Featured an all steel airframe and wider rotor blades. This allowed for and increased carry weight. The Yak-24U was reportedly rebuilt from existing Yak-24, and possibly also produced new from factory.
Yak-24A
Final production model that was produced in very limited quantities. Civilian variant for use by Aeroflot. Mostly used as flying crane. Capable of lifting 5 t on external sling.