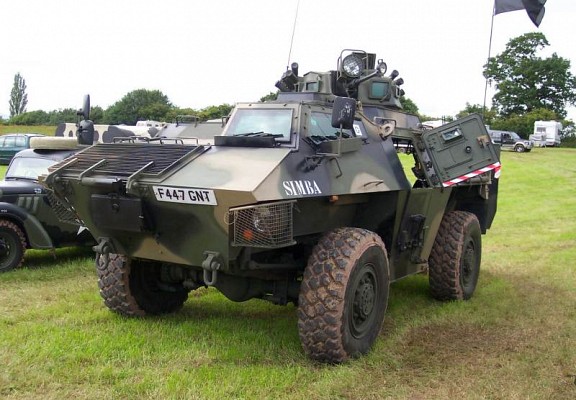 The Simba is an armored personnel carrier of UK origin. It was developed as a private venture by GKN Defense in the late 1980's, based on a prototype first shown in 1978. The Simba was only adopted by the Philippines in the early 1990's and is no longer marketed.

The Simba can be considered a much larger and much improved Saxon armored personnel carrier. The driver is seated on the front left and has good visibility through several armored windows. The engine is mounted at the front left and in the middle a turret is fitted. The crew compartment is at the rear and is accessible though a doors on the left side and at the rear.

The majority of Simba's are fitted with a one man turret with a 12.7mm M2HB heavy machine gun. A small batch has also been fitted with the FVT 925 turret that is armed with a 25mm KBA autocannon and 7.62mm coaxial machine gun. Additionally the infantry may use their personnel weapons through the firing ports in the sides and rear.

The steel armor protects the crew from small arms fire and shell splinters. Two banks of four smoke grenade dischargers are fitted but an NBC system is lacking. Run flat tires are fitted in order to maintain a degree of mobility in case of a puncture.

The 4x4 chassis with large wheels combined with the good power to weight ratio gives the Simba a good performance on roads and off road. The Simba is not amphibious. A Perkins 210 hp turbocharged diesel engine provides propulsion.

The Simba is in use only with the Philippines and was never adopted by the United Kingdom. A total of 150 vehicles was acquired in several configurations. 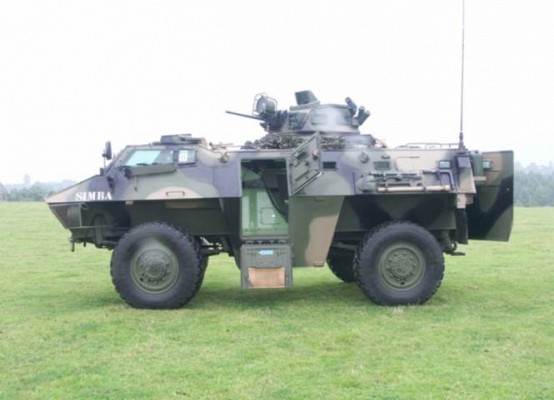 The Simba APC is the most common version of the Simba. The APC features a one man turret with vision blocks all around and a 12.7mm M2HB heavy machine gun. A total of 17 APC's were converted into the command post and ambulance roles. 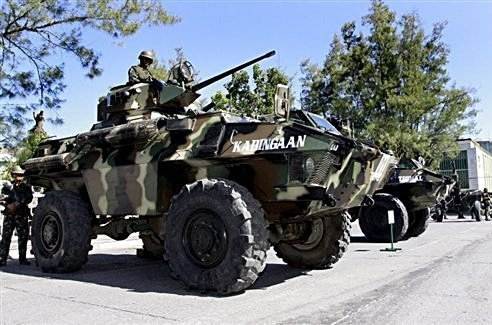 A small batch of Simba's was produced in the Armored Infantry Fighting Vehicle version. The Simba AIFV features a FVT 925 turret that is armed with an Oerlikon 25mm KBA autocannon and a 7.62mm coaxial machine gun.

The armored personnel carrier variant is armed with the M2HB heavy machine gun.

The infantry fighting vehicle variant of the Simba is armed with the 25mm KBA autocannon.