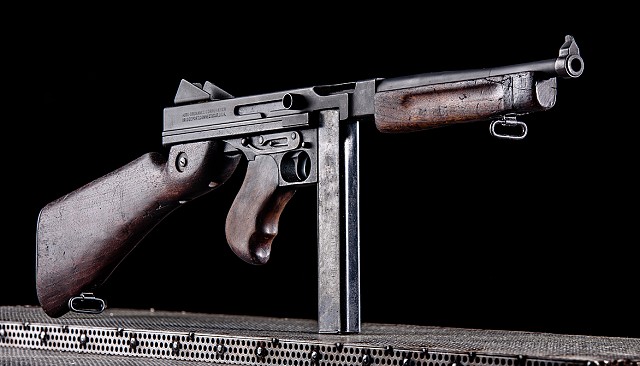 The Thompson is a sub machine gun of US origin that was developed in 1919. The Thompson got its name from its inventor John T. Thompson, but is also known under various nicknames including Tommy Gun, Trench Broom and Chicago Typewriter. The original version with forward pistol grip and 50 round drum magazine has become an iconic firearm associated with gangsters in the US.

The Thompson is a fully automatic sub machine gun made out of metal with the forearm, pistol grip and stock made out of wood. At the time of development the Thompson was a finely made weapon produced to high standards, resulting in a high price tag. The earlier models used a delayed blowback operation based on the Blish principle. Later military versions use the much simpler and cheaper simple blowback operation.

The Thompson is a select-fire weapon. It fires the large and powerful .45 ACP round at a high rate of fire from 20 or 30 round magazines or 50 round drums. Versions developed for the military featured a lower rate of fire. Targets out to 150 meters can be engaged, although with automatic fire the effective range is 50 meters.

The Thompson was widely used by US law enforcement and criminals during the 1930's. Just before World War 2 it was adopted by the US armed forces. The Thompson was well liked for its quality and firepower, albeit very heavy. Although less costly versions of the Thompson reduced the costs from over 200 dollars to as little as 45 dollars the Thompson was replaced in US service by the far cheaper to produce M3 Grease Gun. 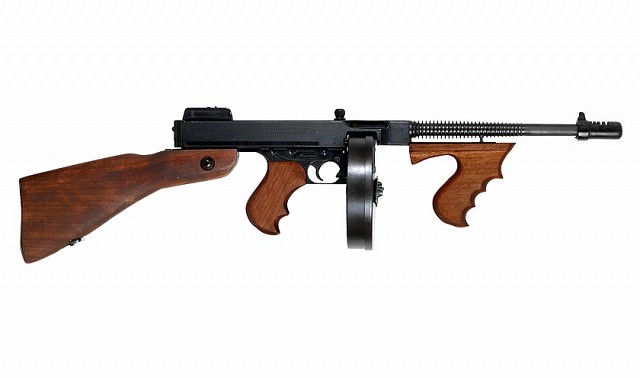 The M1921 was the first Thompson that was mass produced. It has the highest rate of fire of all models and fires from 20 round straight box magazines or 50 round drums. The M1921 is fitted with a forward pistol grip which facilitated easier firing from the hip. The barrel is ribbed to increase cooling rate. In 1926 the M1921 was marketed with the Cutts compensator under the name M1921AC. Those without compensator were renamed M1921A. 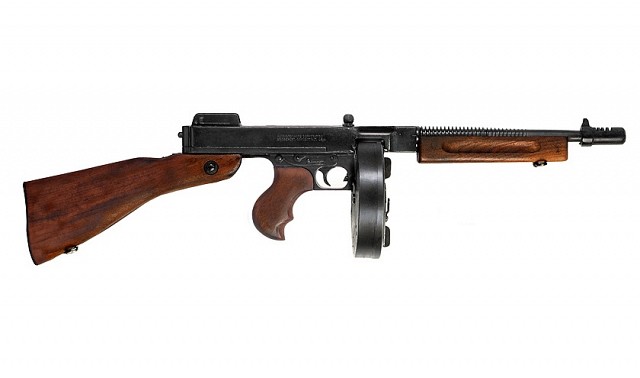 The original M1928 was similar to the M1921AC, but the weight of the mechanism was increased resulting in a more moderate rate of fire as required by the US Navy. The M1928A1 is a M1928 that better suited the wishes of the US armed forces and was easier to mass produce. It features a straight forearm and later on 30 round straight box magazines were introduced as the 50 round drums proved too bulky and noisy for military service. 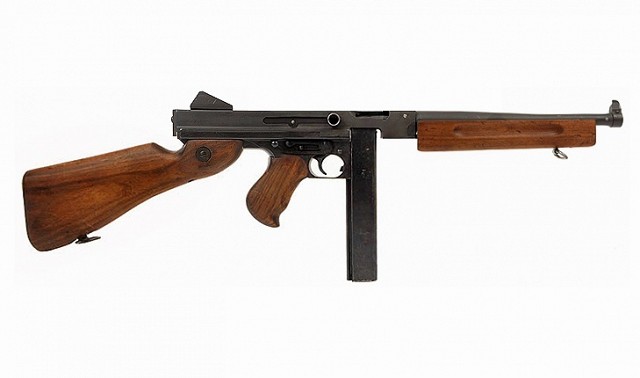 As the US was drawn in World War 2 the need for a much cheaper Thompson arose. The M1 is a much simpler weapon as it uses the simple blowback operation. This results in an even lower rate of fire than the M1928, removing the need for the cooling fins on the barrel and the Cutts compensator. Other cost saving efforts are the fitting of simplified sights, the permanently fixed stock and inability to use drum magazines. The M1A1 is very similar to the M1, it introduced a simplified firing pin and triangular rear sight guards.

The Thompson was replaced in production during World War 2 by the much simpler and lower cost M3 Grease Gun. Both weapons served side by side during the war, but the M3 had a much longer post war service life.