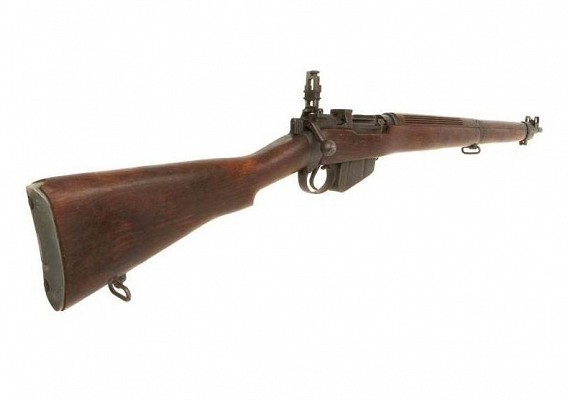 The Lee Enfield is a bolt action rifle of British origin. The original models were developed in the late 19th century. The Short Magazine Lee Enfield, or SMLE, was introduced in 1907 and became an iconic rifle for its use in World War 1 and 2.

The Short Magazine Lee Enfield is a rather convention bolt action rifle. The Lee-Enfield has a unibody wooden furniture which extends nearly the full length of the barrel. The internal magazine is loaded from the top when the bolt is in the rear position. A limited number of rifles was fitted with optical sights for use as a sniper rifle.

The Lee-Enfield fires the .303 British round from a 10 round internal magazine. The magazine is reloaded round by round or using 5 round stripper clips. The Lee-Enfield is known for its accuracy and reliability. The iron sights limit its maximum range to 500 meters while optics allow it to be used up to 800 meters. Although the Lee-Enfield is one of the faster cycling bolt-action rifles, its rate of fire is low compared to modern firearms.

The Lee-Enfield was the standard issue rifle in for the United Kingdom World War 1 and 2. It was used by most Commonwealth nations. After World War 2 is was replaced in most nations by battle rifles such as the FAL. It remained in limited service during the early Cold War era with third world nations. Some Lee-Enfields remain in law enforcement use, especially in India. 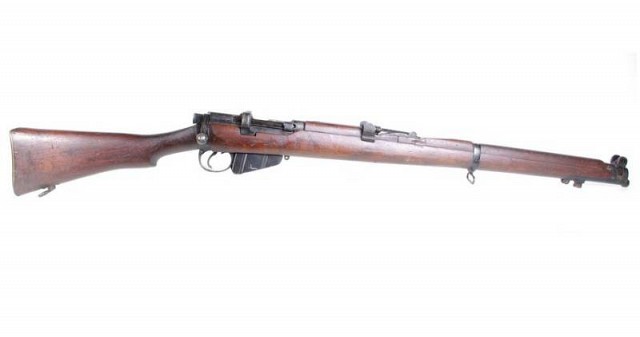 The No.1 rifle designation was applied to the old Mk I and Mk III designs in 1926. The Mk III is the first of the iconic Lee Enfield rifles.

No.1 Mk I: Original Short Magazine Lee Enfield introduced in 1904.
No.1 Mk III: Improved Mk I with redesigned magazine, rear sight and bayonet. Is the first model to use the new spitzer bullet version of the .303 round.
No.1 Mk III*: A No.1 Mk III with simpler sights. 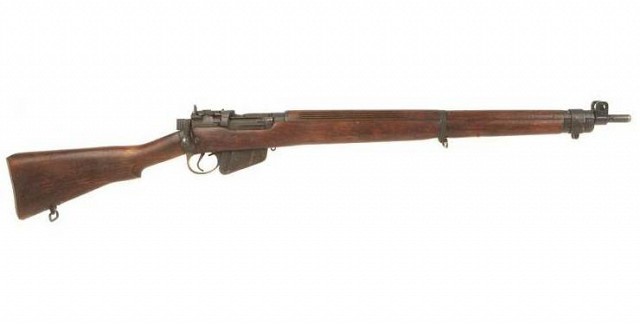 The No.4 rifle is based on the No.1 Mk IV but both more durable and easier to produce. It was developed in the late 1930's and officially adopted in 1941.

No.4 Mk I: Original No.4 rifle produced in the UK.
No.4 Mk I*: Easier to produce version of the No.4 Mk I that was produced in the USA and Canada.
No.4 Mk I(T): A No.4 Mk I fitted with telescope sight for use as a sniper rifle. The No.4 Mk I*(T) is based on the Mk I*.
No.5 Mk 2: Post World War 2 UK production model with revised trigger design and beech wood stock. Many older rifles were brought up to this standard. 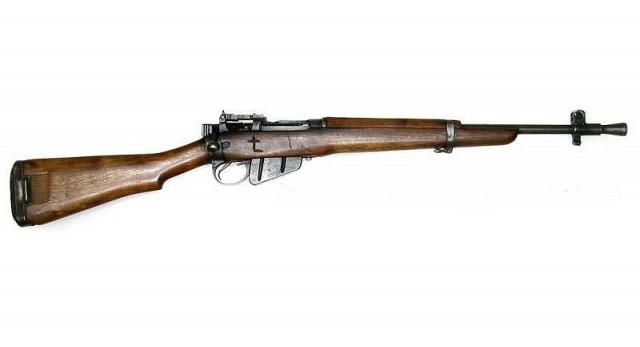 The No.5 Jungle carbine was developed late in World War 2 to meet the demand for a more compact rifle. The jungle carbine has a shorter barrel with prominent flash hider, a shorter stock and shorter forward grip.

In the UK and many Commonwealth nations the Lee Enfield was replaced after World War 2 by the L1A1 Self Loading Rifle, a variant of the Belgian FN FAL battle rifle.