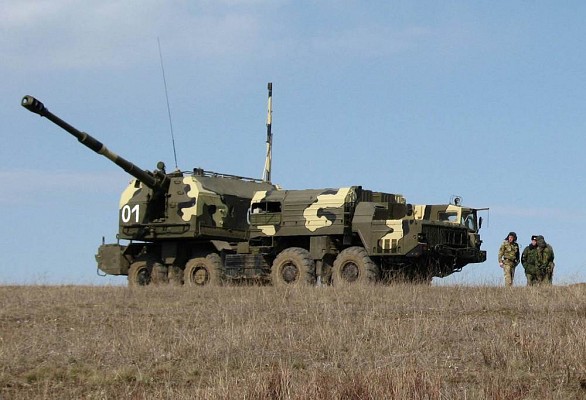 A firing unit of the A-222 Bereg system in the firing position with jacks lowered and turret traversed to the right.
Source: www.prokhor-tebin.livejournal.com - © copyright lies with original owner

The A-222 Bereg is a late Cold War era coastal artillery system of Soviet origin. It was developed in the 1980's to supplement coastal defense missile systems. These systems have a dead zone at shorter ranges and are overkill when used against landing craft. A gun based coastal defense system also has the added advantage of being cheaper in use, it is less susceptible to countermeasures and can be used against landing forces on the beach.

The A-222 Bereg is a system that consists of a number of vehicle based components. The firing unit features a gun turret with 130mm AK-130 cannon derived from the naval gun turret. The gun is stowed facing forwards, but fires over the rear arc. A number of firing units receive target coordinates from a command post with radar. The third component is a support vehicle for the command post.

The command post vehicle is fitted with a search radar with 35 km range. Four targets can be tracked simultaneously and a battery may engage 2 targets at once. Backup optical fire controls with laser range finder allows individual firing units to engage targets with reduced efficiency.

The A-222 Bereg firing units use a 130mm 54-caliber gun derived from the AK-130 naval gun turret. The semi-automatic loading system allows for a rate of fire of 10 to 12 rounds per minute. The maximum range is 23 km. A total of 40 rounds are carried. These include HE-Frag, semi-armor piercing and illumination rounds.

All components of the A-222 Bereg are based on the MAZ-543M 8x8 all terrain truck chassis. This provides the system with good mobility on roads and in the field. The 525 hp diesel allows for a maximum speed of 60 km/h on roads and for a range up to 650 km. Emplacement time is about 5 minutes.

The A-222 Bereg was adopted in small numbers by the USSR in 1988. It remains in use with Russian forces today. The A-222 Bereg is offered for export since the early 1990's but has not been ordered yet. 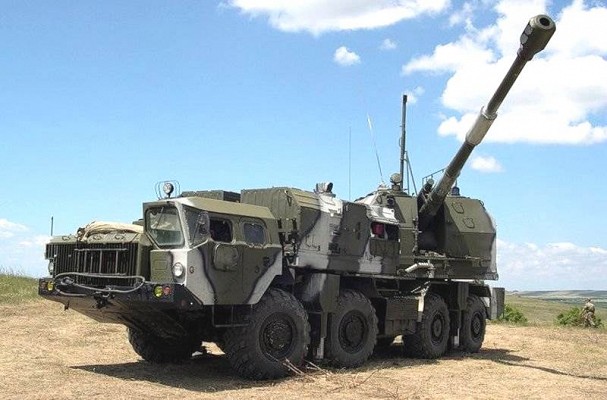 The firing unit (SAU) is fitted with the large box shaped turret with 130mm gun. The naval gun is water cooled but due to its lower rate of fire the A-222 Bereg is air cooled. In the firing position jacks located between the wheels are lowered to provide a stable firing platform. The firing unit is manned by a crew of 8. Four or six firing units are controlled by a single command post. 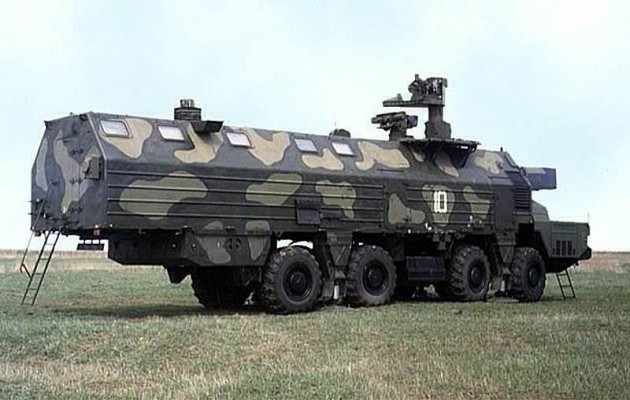 The support vehicle (MOBD) looks somewhat similar to the command post since it also features a large body. It features generators and a mess hall. It is manned by a 4 man crew. 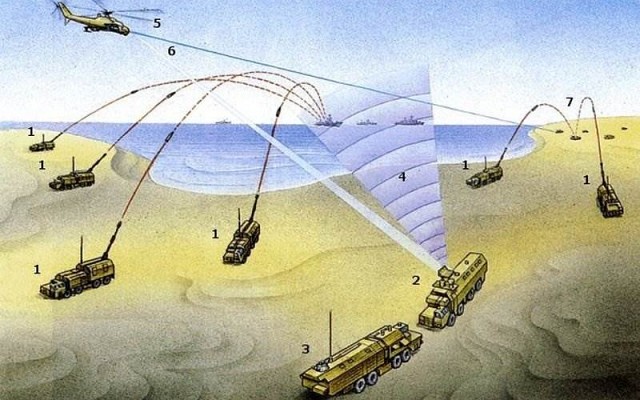 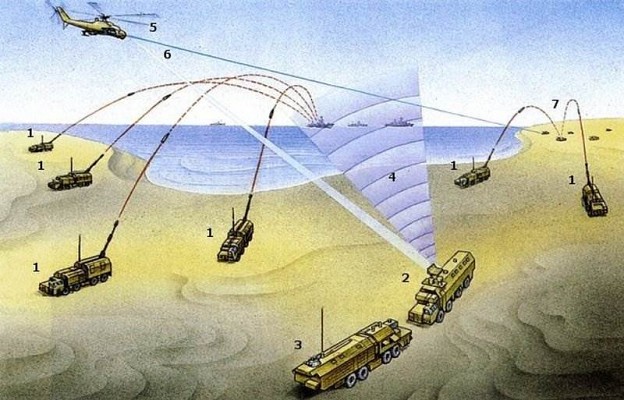 Artist impression of A-222 Bereg system in use. 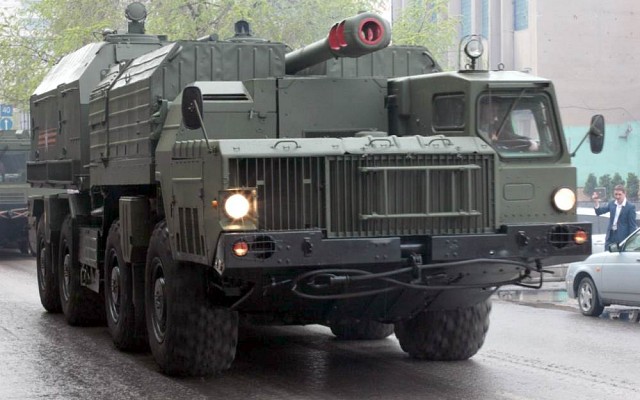 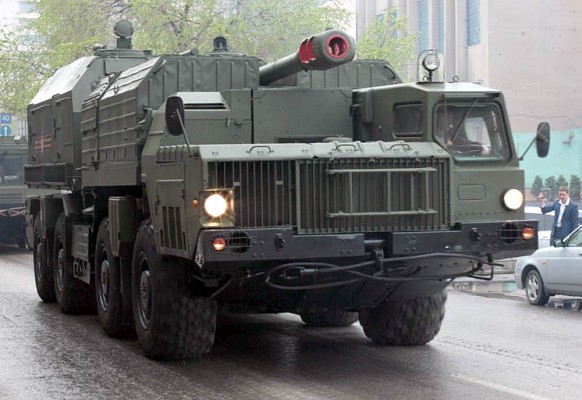 Forward view of A-222 Bereg firing unit in dark green camouflage on the move during a parade. 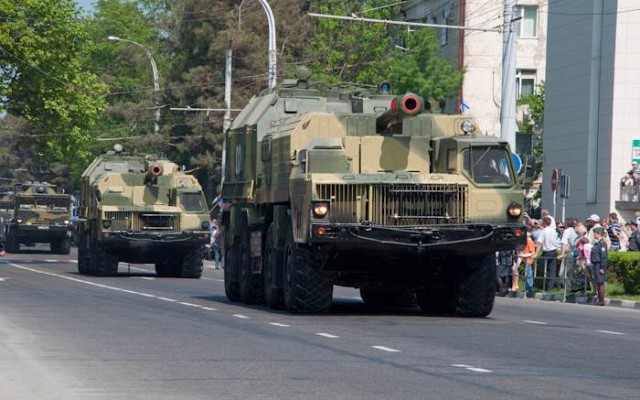 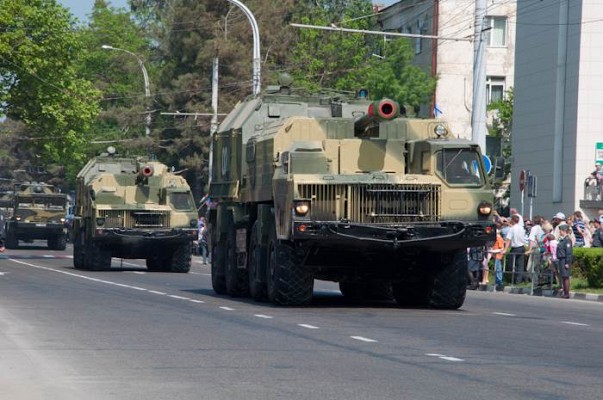 Forward view of two A-222 Bereg firing units on the move during a parade. 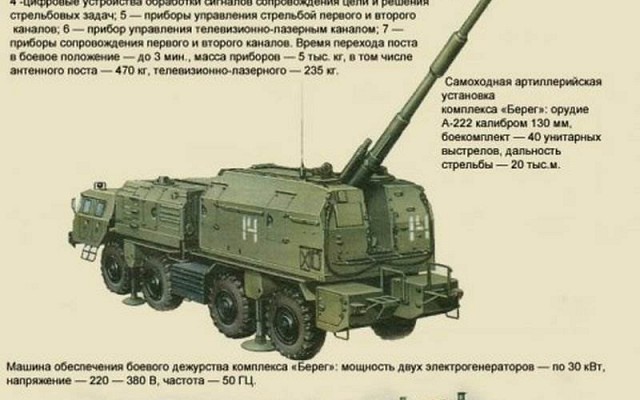 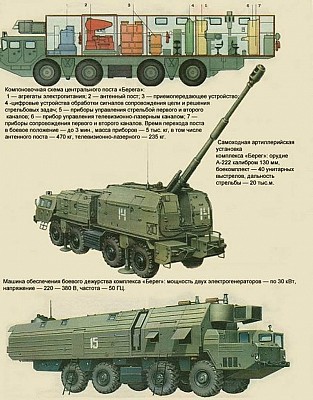 Artist impression of A-222 Bereg system components. Command post on top, firing unit in the middle and support vehicle at bottom. 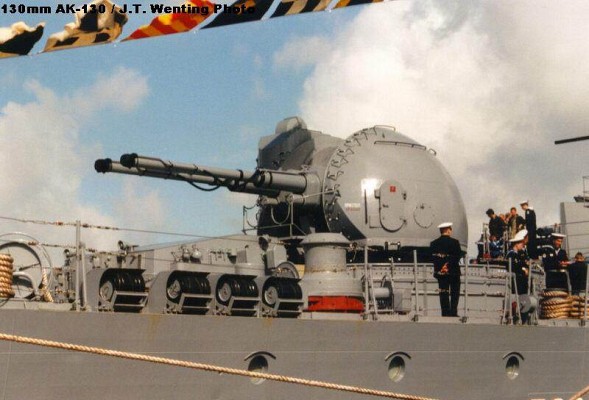 The ordnance of the A-222 Bereg is derived from the AK-130 naval gun turret.