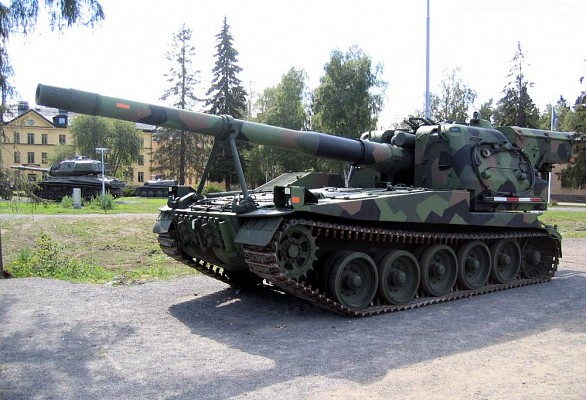 The Bandkanon uses a layout similar to early post World War 2 US self-propelled howitzers. The engine and drive train mounted in the front use similar components as the S-tank. The fixed superstructure in the rear houses the 155mm howitzer and allows for a limited traverse. The 155mm howitzer is connected to an automatic loading system and magazine that holds two clips of 7 rounds.

The main armament is a 155mm 50-caliber howitzer with a maximum range of 25.6 km. The automatic loading system provides an exceptional maximum rate of fire of 14 rounds in 48 seconds. Reloading 14 rounds takes 2 minutes. A 7.62mm MAG machine gun is installed on the roof for self-defense.

The steel hull protects the five crewmembers from 12.7mm rounds, small arms fire and shell splinters. The Bandkanon is operated under full armor protection, except for reloading.

The tracked chassis provides a good cross country performance. Due to its very low power to weight ratio both the road and cross country speed is very low, being 28 km/h at most. Power is provided by a combination of a diesel engine and gas turbine.

The Bandkanon was used by Sweden from 1966 to 2003. A total of 70 units were planned, but due to budget cuts only 26 units were produced. 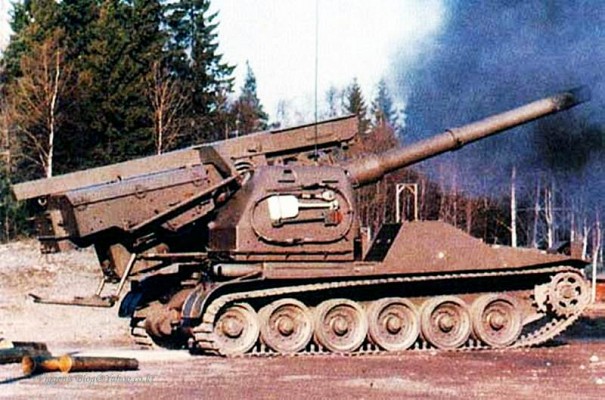 The Bandkanon is a tracked self-propelled howitzer armed with a 155mm 50-caliber gun. It was produced in only one version, the Bandkanon 1A.

In the late 1980's it was upgraded with a new engine and other automotive components and designated Bandkanon 1C.