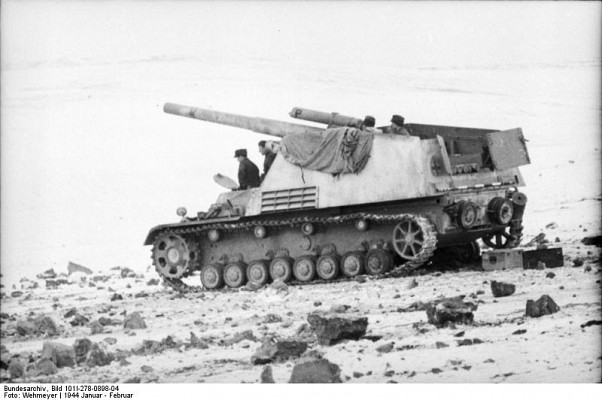 The Hummel is a self-propelled howitzer of Nazi German origin. It was used extensively on the eastern frony against Soviet forces. It was designed to support armored forces with indirect fire, while being able to keep up with their advance. Towed guns are more cost effective, but are less suited for mobile warfare. In this role it served alongside the smaller Wespe which is armed with the lighter 105mm leFh-18.

The Hummel is based on the Geschützwagen III/IV chassis. The earlier Nashorn tank destroyer also uses this chassis and looks rather similar. This platform mates elements of both Panzer III and Panzer IV tanks for use as a weapons carrier. The ordnance is mounted on a center cradle. The gun crew is housed in the rear compartment that features large thin walls and rear doors. The engine is located in the middle and the transmission and drivetrain are in the front. The crew consist of 6 people.

The main armament of the Hummel is the 150mm sFH-18/1 L/30 howitzer. The ordnance is practically identical to its towed counterpart. It fires shells of about 43 kg out to a maximum range of 13 km. Only 18 shells are carried. The open and spacious rear compartment allow for a burst and sustained rate of fire similar to a well set up towed gun. For self-defense a 7.92mm MG34 belt fed machine gun is carried. This can be used on a flexible pintle mount against infantry and ground targets. It can also be used on a bipod away from the vehicle.

The Hummel is an armored vehicle, but is not meant for frontline warfare. The steel armor protects the crew from small arms fire and shell splinters. The rear compartment has no roof, leaving the majority of the crew somewhat exposed.

The Hummel has a good cross country mobility, comparable with the tanks from which its chassis was derived. The Maybach HL120 TRM petrol engine provides up to 300 hp. The maximum speed is 42 km/h on roads and the operational range is over 200 km.

The Hummel was the most widely used self-propelled howitzer in Nazi German service during the last three years of World War 2. However, compared to towed howitzers the number of these self-propelled guns was rather limited. Over 700 Hummels were produced. These mostly operated in support of panzer divisions. A battery would consist of 6 vehicles and 1 ammunition carrier. The majority of Hummels were used on the eastern front against Soviet forces. 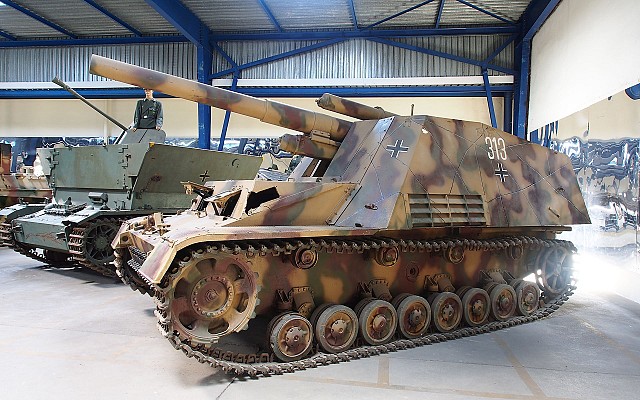 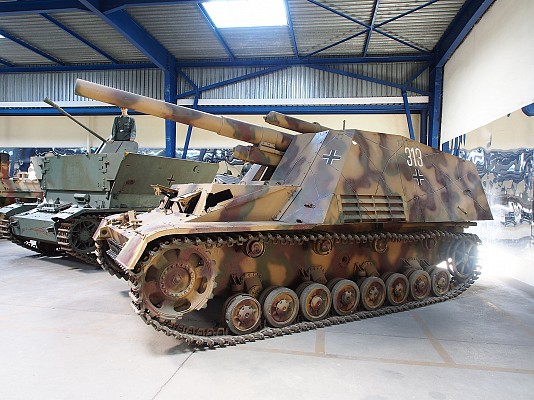 Side view of a Hummel self-propelled howitzer on display in a museum. 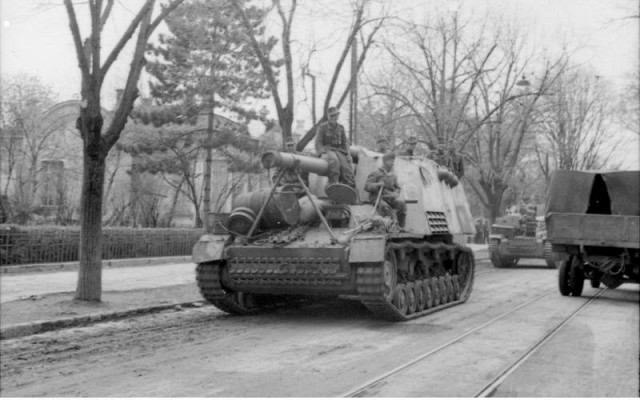 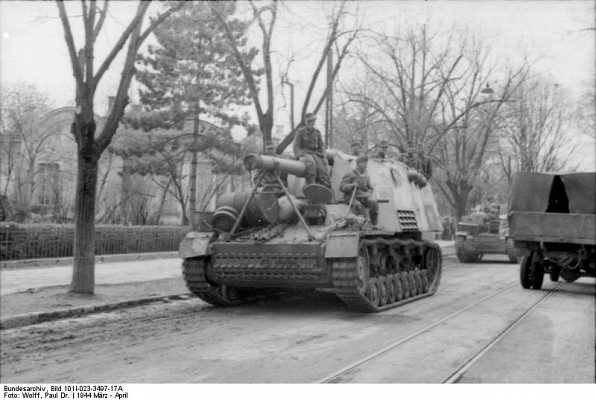 Hummel self-propelled howitzer on the move in Russia during World War 2. 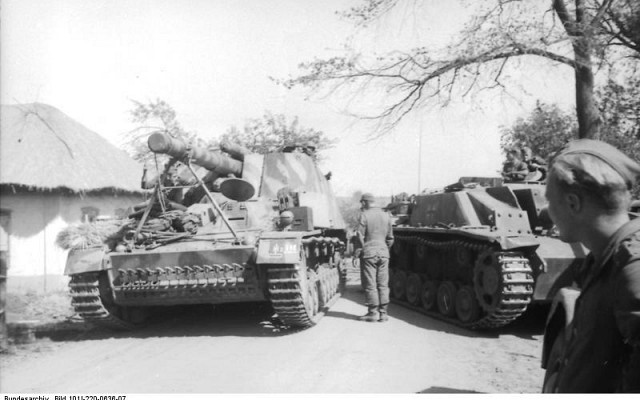 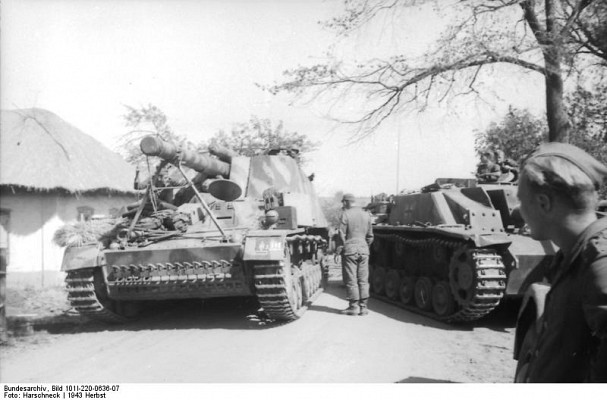 Hummel and StuG III on a road in Russia during World War 2. 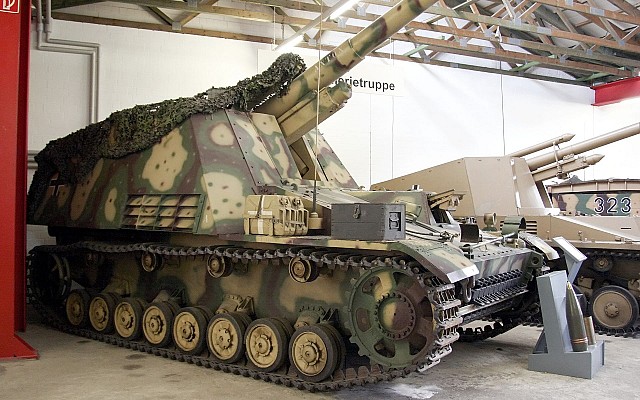 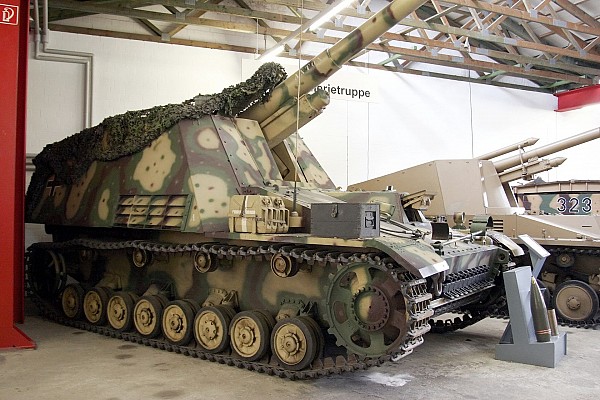 Hummel with a late war camouflage pattern on display in a museum. 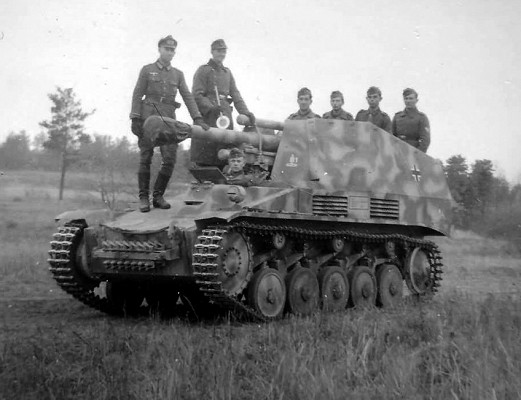 The Hummel served alongside the smaller and less powerful Wespe. The combination of these vehicles provided Nazi German tank formations with mobile fire support during World War 2.