The SPAS-15 is a combat shotgun of Italian origin. It was developed for law enforcement and military use. Essentially the SPAS-15 is an improvement over the earlier SPAS-12 by adding magazine feed. It retains the ability for semi-automatic and pump-action operation.

Externally the SPAS-15 looks like an assault rifle due the box magazines, carrying handle and forearm. The SPAS-15 differs from the SPAS-12 in its rotating bolt short gas piston operation. The receiver is made of aluminum and the furniture uses a lot of plastics. Early versions had a fixed plastic or folding metal stock. Late versions have a plastic folding stock.

The SPAS-15 is a semi-automatic shotgun that allows for pump-action operation when using low powered ammunition. It fires 12 ga shells of 2.75-inch length from 6 round detachable magazines. Additionally 3 or 8 round magazines are available.

The SPAS-15 was sold to various military and law enforcement units. The Italian army adopted it for peacekeeping missions. Italian special forces rejected it for its size. 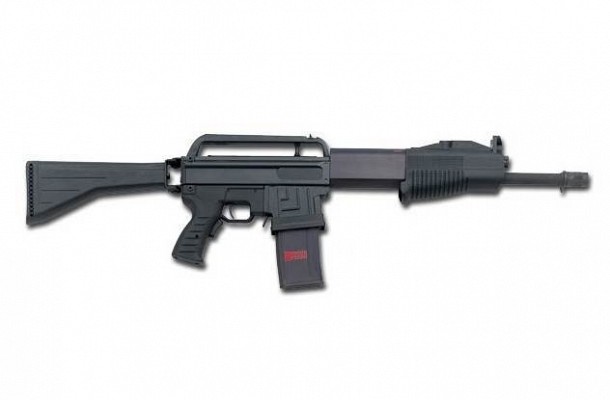 Variants of the SPAS-15

The SPAS-15 comes in only one version. Early versions were available with plastic fixed stock or a foldable metal tube stock. Later versions had a folding plastic stock.