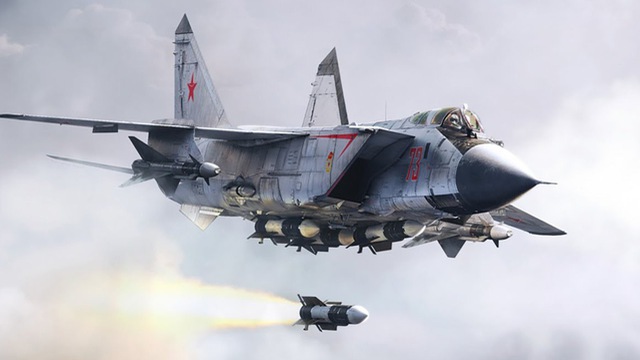 The R-33 is a long range air to air missile of Soviet origin. It was developed for use on the high altitude and fast flying MiG-31 interceptor.

The R-33 is a very large and heavy missile. Designed for high altitude and high speed flight. The missile uses long chord wings and is steered by the larger tail fins. The seeker and warhead are located at the front. The solid propelland rocket makes up the rear half of the missile.

The R-33 was designed for use in conjunction with the powerful Zaslon radar. The R-33 uses passive radar homing in the terminal phase. Upon launch it uses inertial navigation and receives mid course updates from the launch aircraft. Soviet doctrine was to remain passive when intercepting target and launching missiles, using ground control orders where possible. Only at the last phase of missile flight the target would be illuminated. A variant with IR seeker was evaluated but never developed.

The R-33 has a range of 120 km. The R-33S carries more fuel and flies out to 160 km. Maximum flight speed is Mach 4.5 or higher. The R-33 is difficult to evade due to its guidance modes and speed, but lacks maneuverability. The pre-fragmented high explosive warhead is powerful enough to destroy a bomber aircraft.

The R-33 is used only by the MiG-31 (NATO: Foxhound) series of high speed interceptors. Four missiles can be carried in recesses in the fuselage.

Variants of the R-33 missile