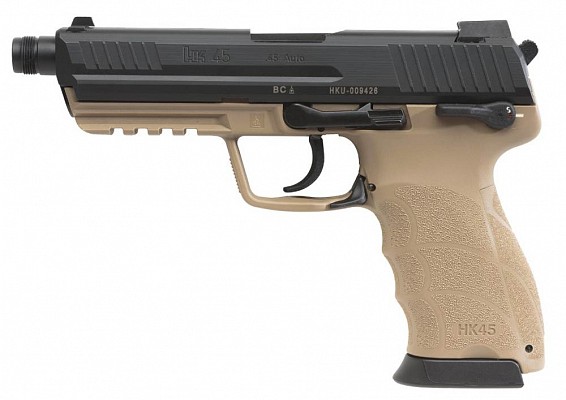 The HK 45 is a modern pistol of German origin, although the design was mainly carried out in the USA. It was developed to meet the US Army requirements for a .45 ACP pistol in the Joint Combat Pistol program, which was suspended indefinitely. The name HK 45 is derived from the sole caliber in which this pistol is available.

The HK 45 uses a mixture of design elements from the USP and P30 pistols. The internal mechanism of the HK 45 is derived from the higher quality USP models that feature an O-ring barrel, such as the USP Tactical. The exterior and ergonomics are derived from the P30, as is shown by the ergonomic grip with exchangeable backstraps and ambidextrous slide release. The HK 45 is recoil operated with modified Browning locking system and recoil buffer system. A Picatinny accessory rail is present.

The HK 45 is a semi-automatic pistol that fires the powerful .45 ACP from a 10 round magazine. Due to the design and production quality the accuracy is reportedly very good. Accuracy is claimed to be on par with custom made M1911's. Both the full size and the compact model can be fitted with a threaded barrel to accept silencers.

The HK 45 is marketed for US law enforcement and civilian market. The HK 45 is also likely to be adopted by special forces around the world as a less expensive alternative to the Mk 23 and USP Tactical. 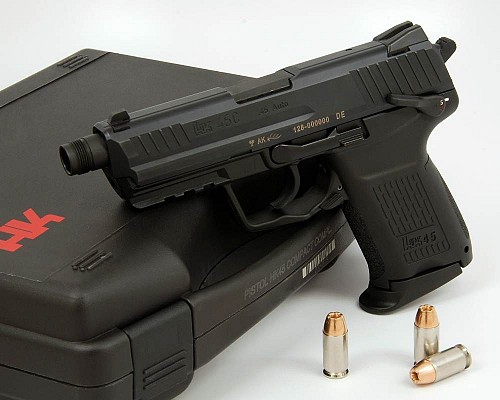 The HK 45 Compact features a shorter barrel and slide than the full size model and has a straight pistol grip similar to the one on the P2000. It is only available in .45 ACP and fires from a smaller 8 round magazine. Recently it is being marketed with the standard 10 round magazine.

HK 45 Compact: Original model with standard barrel that does not protrude from slide.
HK 45 Compact Tactical: Model with longer threaded barrel that allows for a silencer to be fitted. Also known as Mk 24 Mod 0 in US service. 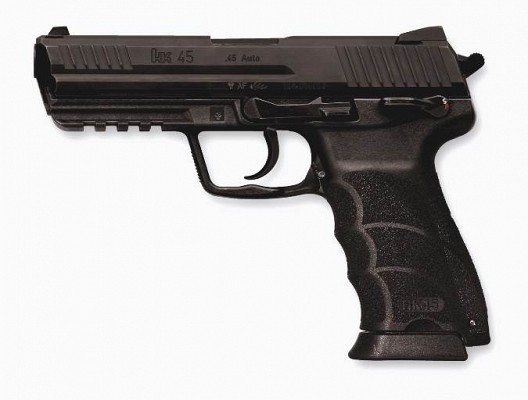 The HK 45 is the original full size pistol and can be distinguished from the Compact model in having a contoured pistol grip and a spurred hammer. It is only available chambered in .45 ACP and fires from a 10 round magazine.

HK 45: Original model with standard barrel that does not protrude from slide.
HK 45 Tactical: Model with longer threaded barrel that allows for a silencer to be fitted. 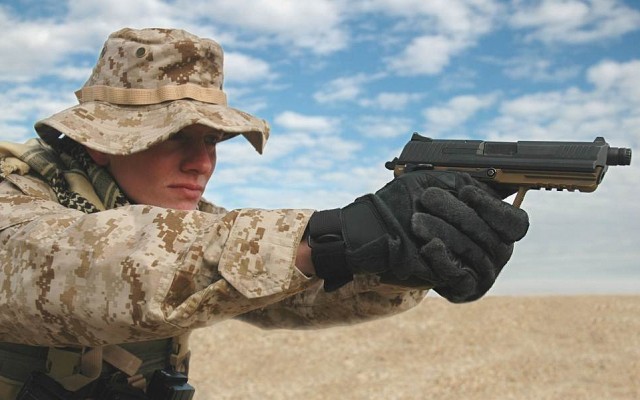 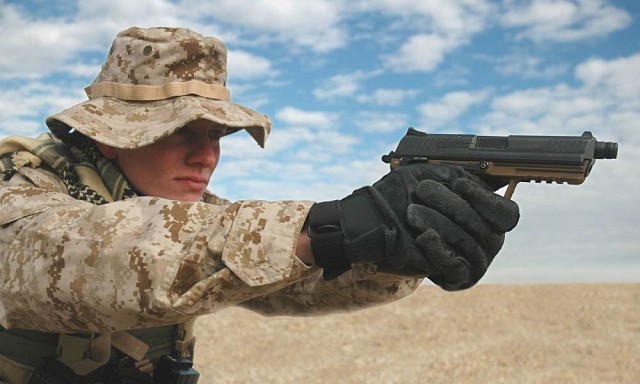 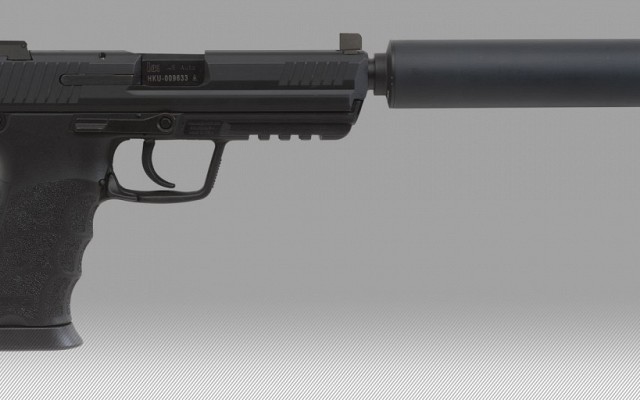 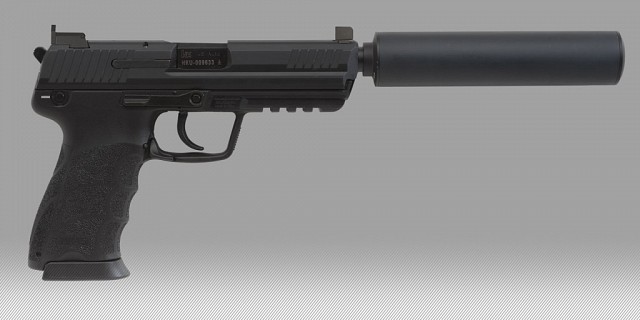 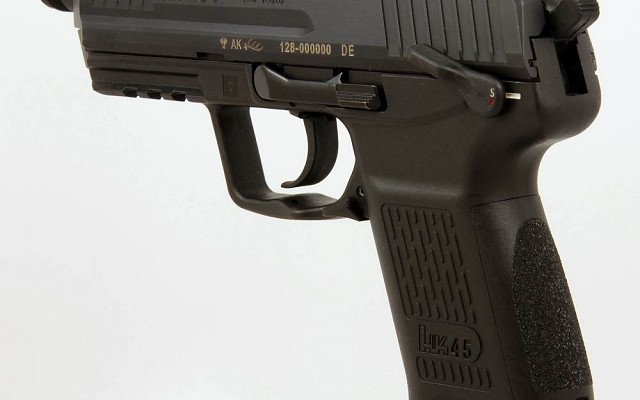 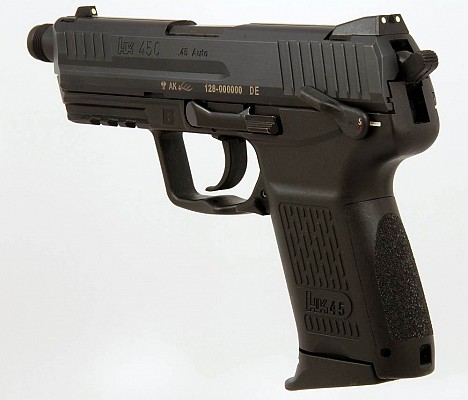 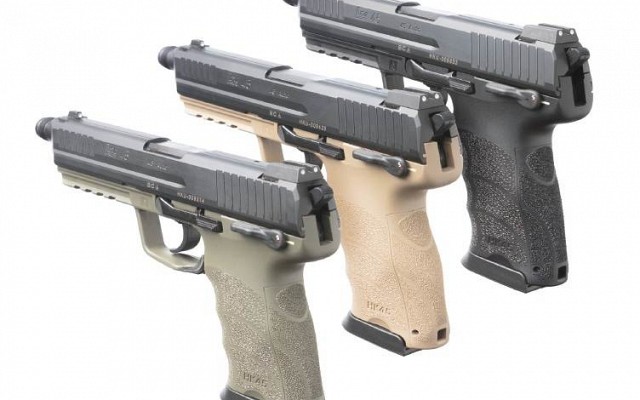 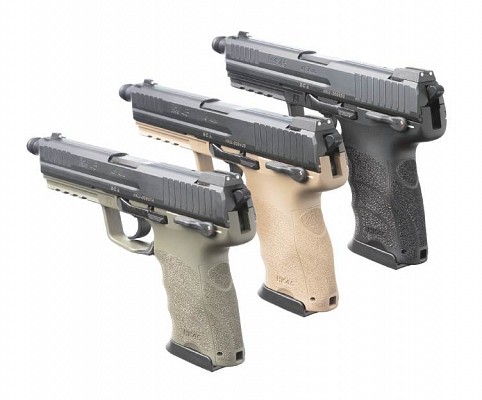 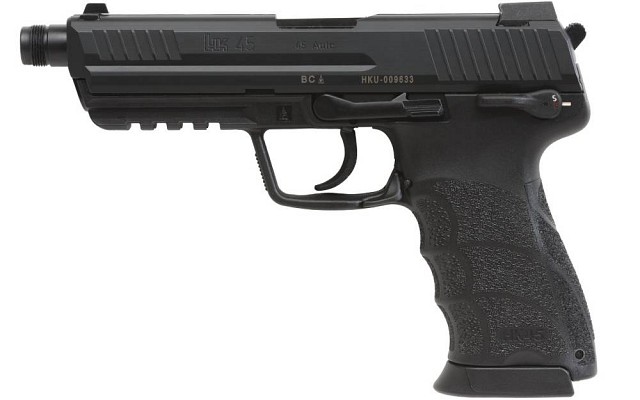 Left side view of HK 45 Tactical with black polymer frame.

Left side view of HK 45 Tactical with tan polymer frame. 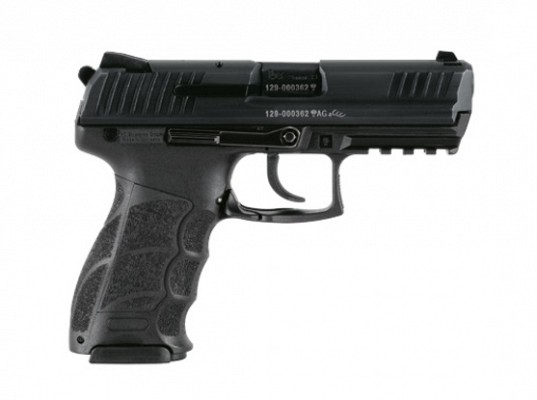 The HK 45 looks similar to the P30. Both pistols feature the same contoured grip.