Saurer 6 DM and 10 DM tactical trucks side by side.
Source: aviapassion.forumactif.com - © Copyright lies with original owner

The Saurer DM is a series of tactical trucks of Swiss origin. They were developed in the late 1970's to replace various older model trucks in Swiss service. The DM series of trucks were only produced for the Swiss military and the Saurer company ceased to exist a few years later.

The Saurer DM series are a new design and bears very little resemblance to older Saurer models. The series consists of a 4x4 and 6x6 truck that have many parts in common, including the cab and many parts of the chassis. The 6x6 version has a different rear suspension, is longer and has a more powerful engine. Besides a crane version based on the 6x6 chassis all vehicles are fitted with a flatbed with drop down sides and tarpaulin cover.

The Saurer DM series are unarmed and do not feature a weapon mount.

The DM series are fitted with an unarmored driver's cab. No NBC system or smoke equipment are present.

The Saurer DM series has all wheel drive and large all terrain tires. This results in a good off road performance. A 250 or 320 hp diesel engine provides propulsion.

The sole operator of the Saurer DM series is the Swiss army. The DM series replaced most older Swiss trucks and have recently been complemented by the Duro light truck. The Saurer 10 DM is the 4x4 version of the Saurer DM series. It has a 6 t load capacity. All vehicles are fitted with a flatbed with drop down sides and a tarpaulin cover. It is in service with and without Rotzler winch. 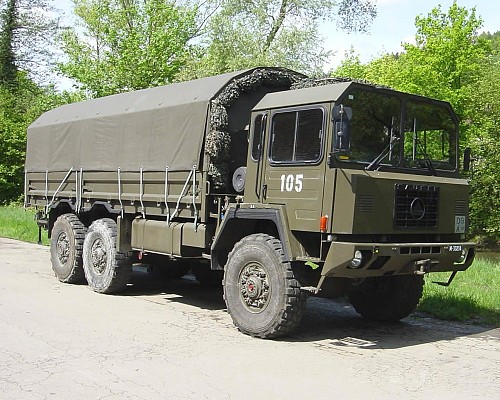 The Saurer 10 DM is the 6x6 version of the 6 DM and has a 10 t load capacity. The 10 DM shares many automotive components with the 6 DM and mainly differs in rear suspension and engine. All vehicles are fitted with a flatbed with drop down sides and a tarpaulin cover. It is in service with and without Rotzler winch. 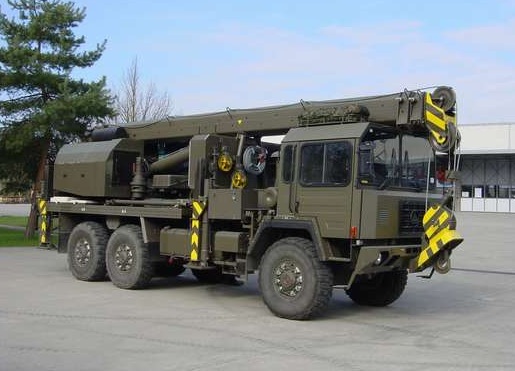 The Saurer 10 DM chassis also served as the base vehicle for a mobile Crane. The flatbed and tarpaulin cover are not fitted. A Gottwald crane if fitted instead and has the ability to rotate 360 degrees. The crane can be used for lifting goods and for recovery purposes. When the crane is used for outriggers ensure stability. 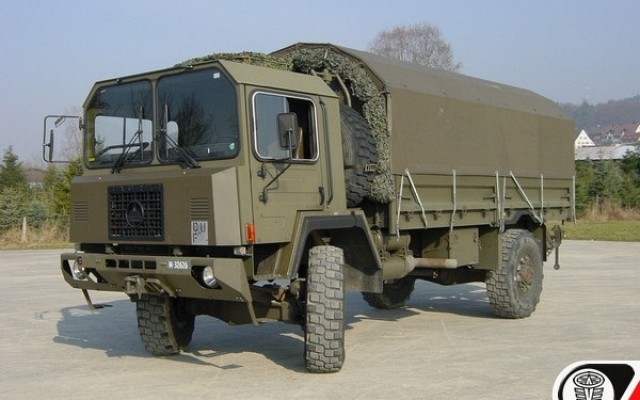 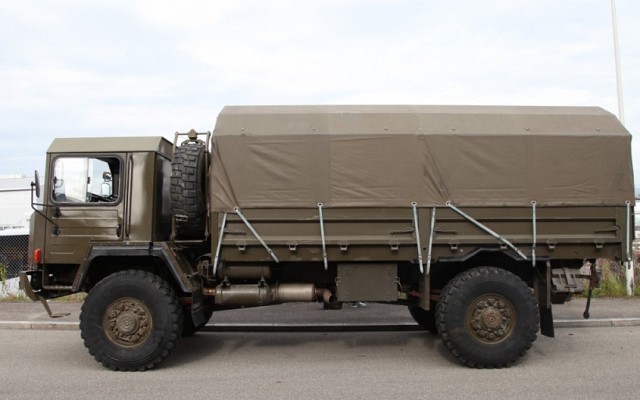 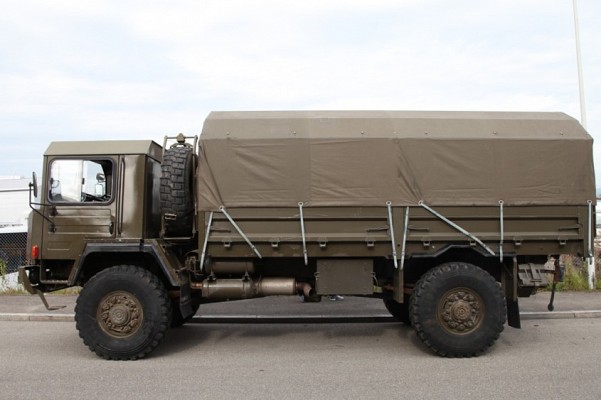 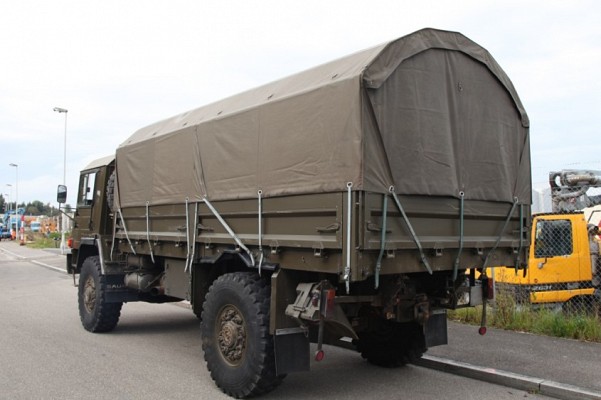 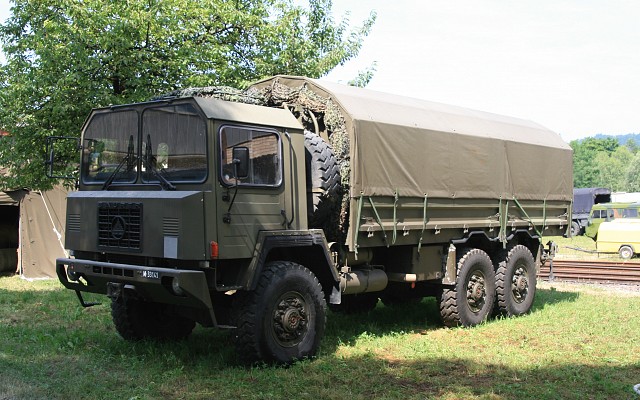 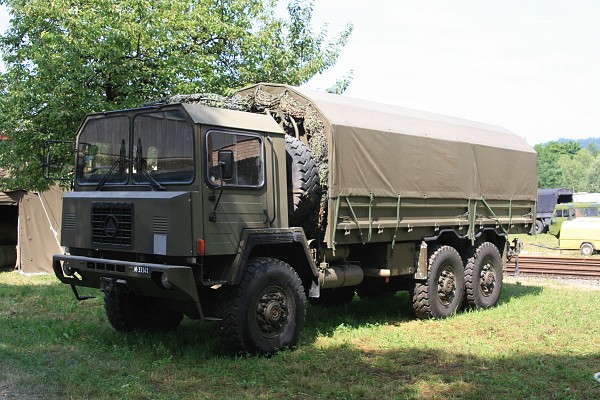 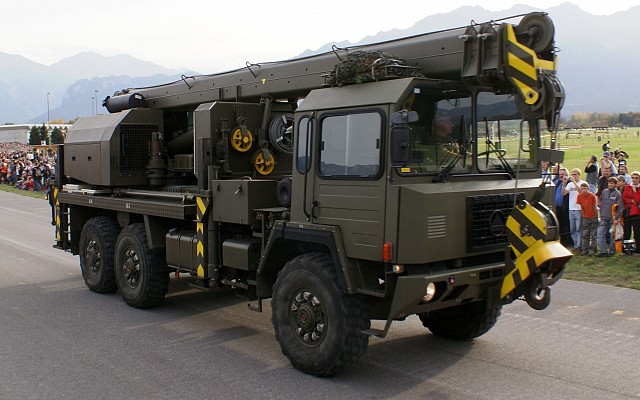 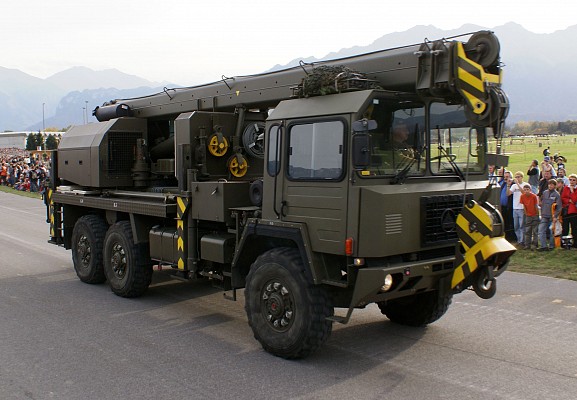 Saurer 10 DM 6x6 tactical truck with Gottwald crane shown to the public in 2006. 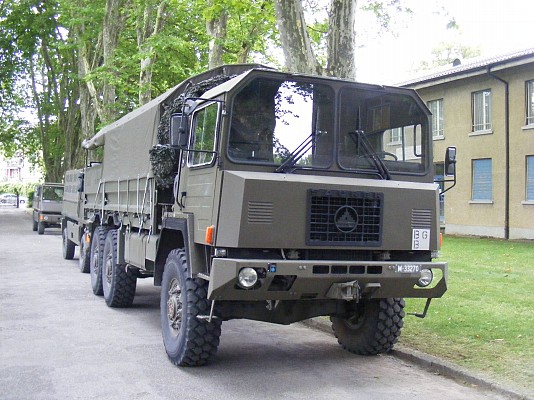