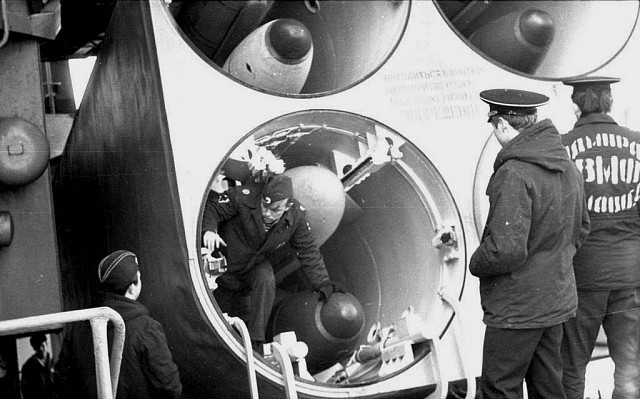 The AT-2 is a heavyweight air launched torpedo of Soviet origin. It was developed in the early 1960's for use against submarines. In order to achieve the requested range, speed and detection range a large diameter torpedo was required. This makes the AT-2 one of the few air launched heavyweight torpedoes developed during the Cold War. The majority of air-launched torpedoes are much smaller and only a quarter of the weight.

Design of the AT-2 is conventional with electric propulsion and acoustic homing. The AT-2 is carried by fixed wing anti-submarine warfare aircraft, not by helicopters. The AT-2U is a modified AT-2 for use by the large Metel ASW rocket system. Existing AT-2 and AT-2U were modernized to AT-2M and AT-2UM standard. This may either be a life extension program, or an upgrade with improved performance.

Ilyushin Il-38
The Il-38 (NATO: May) is a maritime patrol aircraft based on the Il-18 turboprop airliner. It can be considered the Soviet counterpart to the P-3 Orion.
Tupolev Tu-142
The Tu-142 (NATO: Bear) is a long range maritime reconnaissance and anti-submarine warfare aircraft based on the Tu-95 strategic bomber.
Beriev Be-12
The Be-12 (NATO: Mail) is an amphibious maritime patrol aircraft. Due to the limited weapon load often other weapons than the AT-2 are used on the Be-12.
70R
Rocket for the RPK-3 Metel ASW rocket system. Fitted with AT-2U variant.
84R
Rocket for the URPK-4 Metel-U ASW rocket system. Fitted with AT-2UM variant.