The Type 65-73 can be considered an up-scaled version of the Type 53-65 design. It uses a turbine engine powered by a fuel mixture that includes high test peroxide. This provides a significant amount of power, but comes at a risk since it is a highly volatile mixture. The warhead section is located in the nose. The fuel and gas turbine make up the center and guidance section is located at the rear.

The Type 65-73 is fitted with a nuclear warhead. This is reported to have a 20 kT yield, similar to the warhead used in 533mm nuclear-tipped torpedoes. Based on test data the Soviet estimate was that any ship within a 700 m radius would be destroyed. All ships within a 1.4 km radius would be severely damaged. Before the nuclear warhead can be armed action by both the captain and the political officer is required.

The Soviet navy was the only user of the Type 65-73 torpedo. After the break-up of the Soviet Union all weapons were transferred to Russia. None remain in service. 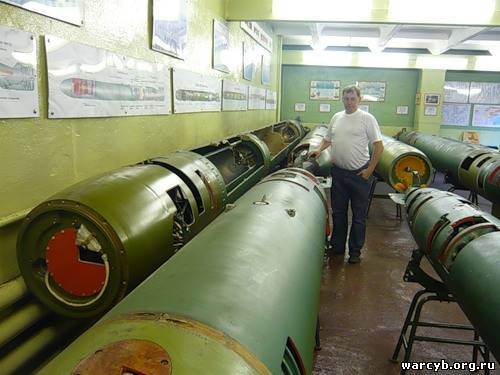 The Type 65-76 is an anti-shipping torpedo with conventional warhead and wake homing guidance. The dimensions and propulsion system are similar to the Type 65-73.