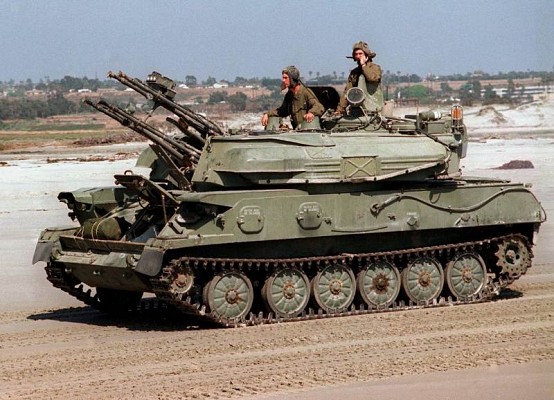 A ZSU-23-4 on the moved with radar lowered behind turret.
Source: US Marine Corps (Sgt. Ryan Ward) - © public domain

The ZSU-23-4 is a self-propelled anti-aircraft gun of Soviet origin. It was developed in the early 1960's to replace the older ZSU-57-2, which was very powerful but lacked radar control and rate of fire. The name ZSU stands for "Zenitnaya Samokhodnaya Ustanovka", which is Russian for "anti-aircraft self-propelled mount". The number 23 indicates the caliber and 4 the number of guns.

The ZSU-23-4 is based on a tracked chassis with many automotive components similar to the PT-76 light tank. The driver is seated in at the front left, the three man turret is located in the middle and the engine and drivetrain are at the rear. The unusual AZP-23 four gun mount is fitted to the front of the turret with the ammunition boxes on each side. The crew is seated in the middle of the turret and the retractable radar is fitted at the rear.

The ZSU-23-4 is fitted with four water cooled 23mm 2A7 autocannon. Each gun has a rate of fire of 850 to 1.000 rpm and is supplied with 500 round of ammunition. This combines to a phenomenal volume of fire of 3.400 to 4.000 rpm. The maximum effective range against both aircraft and ground targets is 2.5 km with a maximum altitude of 1.5 km and slant range of over 5 km. Since the armament is stabilized the ZSU-23-4 is able to fire on the move, albeit at a loss of accuracy.

The RPK-2 Tobol radar is located on top of the turret. It has the NATO reporting name Gun Dish. The radar has a search range of 20 km and tracking range of 18 km. A target can be locked in 20 to 30 seconds. An optical sight is fitted for use against ground targets or under ECM conditions.

Unlike the older ZSU-57-2 the ZSU-23-4 is operated under full armor protection. The steel armor protects the crew from small arms fire and shell splinters. An NBC system is fitted but smoke grenade dischargers are not.

The tracked chassis provides a good all terrain performance, but the speed is somewhat limited. A 280 hp diesel provides propulsion and an APU provides power when the engine is not running. The maximum speed is 50 km/h on roads and about 30 km/h in the field. The maximum range is about 450 km and the ZSU-23-4 is not amphibious.

The ZSU-23-4 was produced in large quantities and is the most produced self-propelled anti-aircraft gun in the world. It was a very common weapon in the USSR and Warsaw Pact nations and was exported to most nations with links to the USSR. In many nations the ZSU-23-4 has been supplemented with newer systems or surface to air missiles, but many remain in service today. It can still be encountered in Eastern Europe, the Middle East, Africa and Asia. 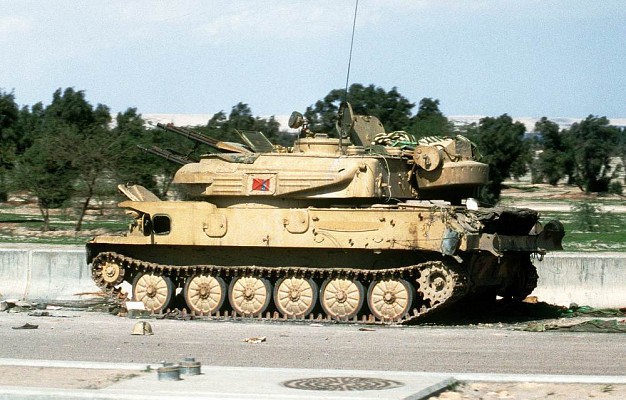 An abandoned Iraqi ZSU-23-4 with all hatched open and radar lowered behind turret.
Source: US DOD (photographer unknown) - © public domain 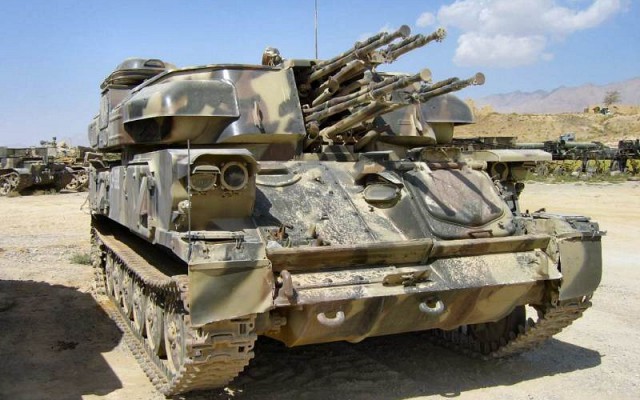 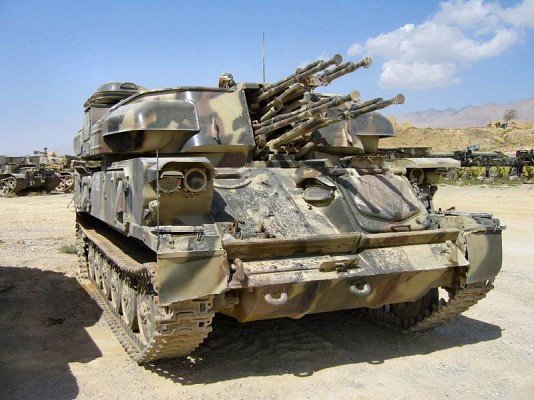 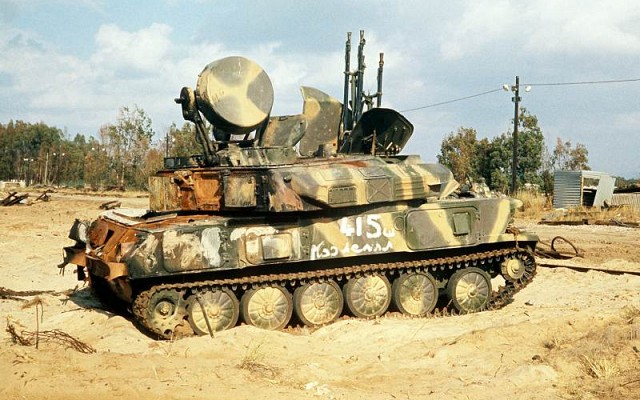 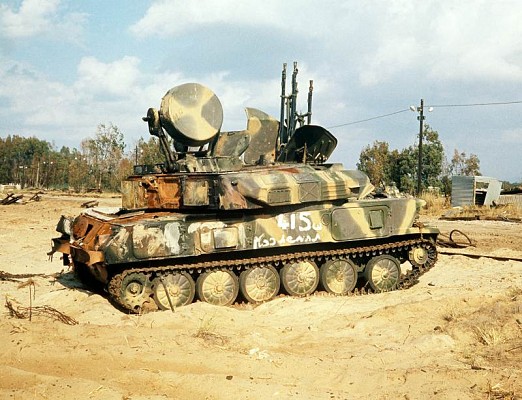 Photo of Iraqi ZSU-23-4 with radar up and guns at maximum elevation, dated 1974. 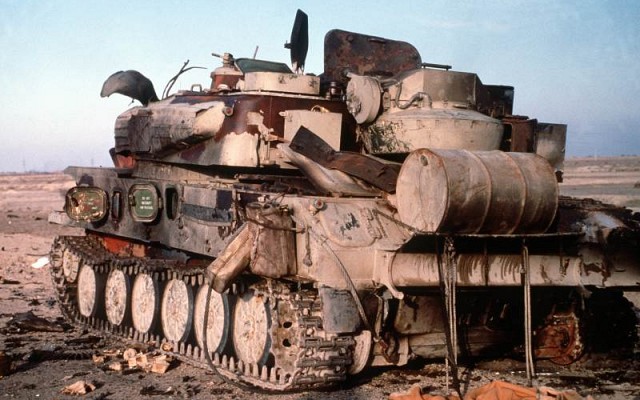 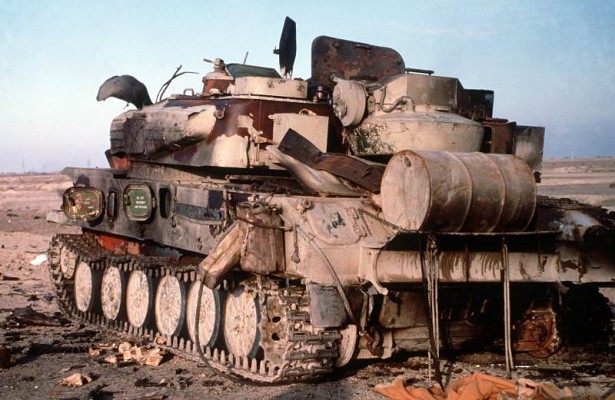 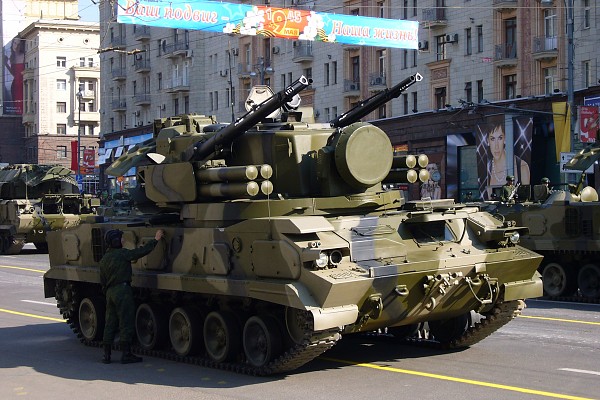 The 2S6 Tunguska is a more capable system designed to replace the ZSU-23-4. It features more powerful autocannon and has 8 ready to launch surface to air missiles.

The chassis ZSU-23-4 is based on the chassis of the PT-76 amphibious light tank.

The ZSU-23-4 is armed with a water cooled variant of the autocannon used on the ZU-23-2 light anti-aircraft gun. Both systems fire the same 23x152mm ammunition.