The PK is a machine gun of Soviet origin. It was developed in the early 1960's by Mikhail Kalashnikov to replace several types of older machine guns in Soviet service. The name PK stands for “Pulemyot Kalashnikova”, which is Russian for “Kalashnikov machine gun”. Due to its reliability, firepower and limited weight it became a very successful design. Over 1 million copies have been produced.

The PK is based on the Kalashnikov mechanism and features many elements of older machine gun designs. It is a gas operated weapon using a long stroke gas piston, rotating bolt and fires from the open bolt position. The PK is belt fed and the non-disintegrating link belt is usually carried in a metal box attached to the weapon. The barrel can be changed, but is not of a quick detachable design. Some PK are fitted with optics or night vision sighs, although this is uncommon. Besides the infantry version there are variants for tripod, pintle mount and coaxial use.

The PK fires the 7.62x54mm Russian round from belts of 100, 200 or 250 rounds. The PK fires only fully automatic at a cyclic rate of fire of about 650 rpm. The practical rate of fire is claimed as 250 rpm. The effective range is about 500 meters against point targets and 800 meters against area targets. When fitted on a tripod or vehicle the maximum range is extended to over 1 km.

The first and foremost user of the PK was the USSR. The PK was widely used by infantry and fitted on most armored vehicles as a pintle mounted or coaxial machine gun. The PK and its variants were also exported to nearly all nations with ties to the USSR, making it one of the most common general purpose machine guns in the world. Nowadays the PK remains in active use in Eastern Europe, Asia, Africa, the Middle East and South America. 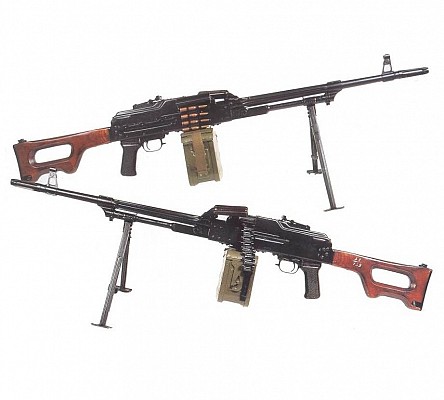 The PK is the original version from which all variants were derived. It can be distinguished from the later PKM by its fluted barrel and longer flash hider. 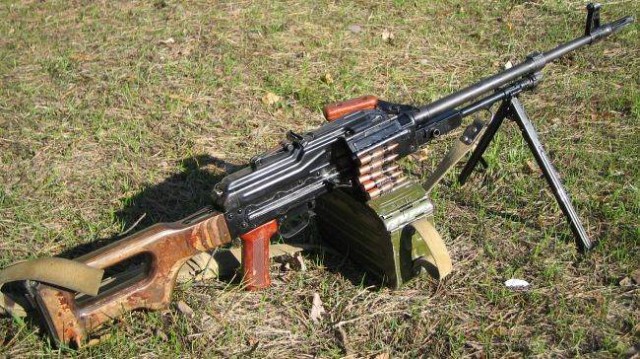 The PKM is an improved version of the original PK that entered service in 1969. It is a lightened version that is made out of stamped metal and uses a non-fluted barrel and shorter muzzle brake. The M in PKM stands for “Modernizirovannyi”, which is Russian for “modernized”. 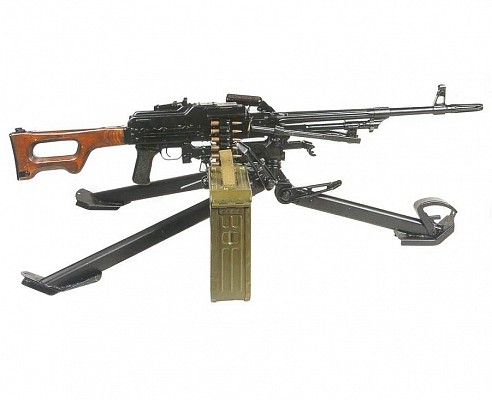 The PKS is a PK that has been modified for use on a tripod. It has a mounting bracket under the gas piston just in front of the receiver. The S in PKS stands for “Stankovyi”, which is Russian for “mounted”. The PKMS features the same lighter barrel as the PKM and is normally fitted on the much lighter Stepanov tripod. 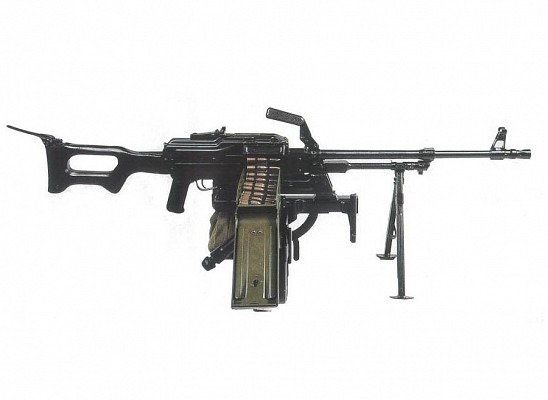 The PKB is a PK that has been adapted for use as a pintle mounted weapon. A swivel has been attached to the middle of the weapon. The PKMB features the same lighter barrel as used on the PKM. Some PKB's used on helicopters are fitted with spade grips instead of a pistol grip and shoulder stock.

The PKT is the coaxial machine gun variant of the PK. It has a heavier barrel and is solenoid fired.