The HG 85 is a hand grenade of Swiss origin. It was developed in the early 1980's by RUAG for the Swiss military and export sales. The HG 85 is a very effective grenade with a safety radius that is smaller than most defensive grenades, reducing the risk for the one throwing it.

The HG 85 is a defensive grenade with a conventional design. The HG 85 has a DM 82 CS fuze and a filling of RDX and TNT that is encapsulated in a steel liner. The steel liner has a dimpled inner surface in order to fragment evenly into all directions. The German and Dutch versions feature a similar additional metal safety clip. The OGH 92 is an offensive version of the HG 85 that lacks the steel liner and add a little more explosive.

The HG 85 has a lethal radius of over 10 meters and a claimed safety radius of only 20 meters. This makes the HG 85 both a powerful and safe hand grenade. The notched steel liner produces about 2.000 fragments that will penetrate 20 layers of Kevlar and 1.6 mm titanium at 10 meters. Since it is rather heavy the throwing range will average around 30 meters. The OHG 92 has a similar performance as the HG 85, but the lack of fragments reduces the lethal radius to below 10 meters and it lacks the armor piercing capabilities.

The HG 85 is the standard issue hand grenade of the Swiss, UK and Dutch armed forces. It has been acquired in large quantities and remains in active service. 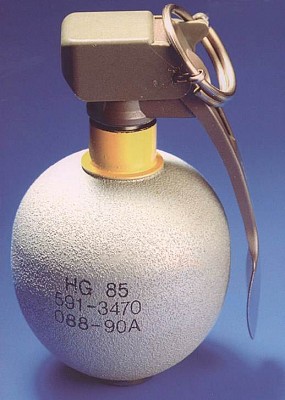 The HG 85 is a conventional fragmentation grenade produced to high standards. It has a large casualty and limited safety range due to the precise fragment size that results in hardly any low powered fragments or large high powered fragments that are lethal at longer ranges. The HG 85 used in the UK and the Netherlands feature an additional metal safety clip around the spoon.

The EUHG 85 is a practice grenade with a rather large explosive power.
The Mk HG 85 is a training version with color marking effect.
The WURFK HG 85 is a rigid plastic dummy grenade. 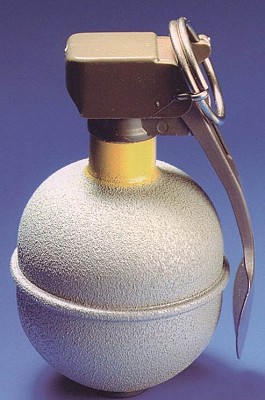 The OHG 92 is an offensive version of the HG 85 defensive grenade. The OGH 92 does not feature a steel fragmentation liner and relies on explosive power alone. As such it also lacks the armor piercing capabilities of the HG 85 and its casualty radius is smaller. The OGH 92 can be distinguished from the HG 85 by the band around the middle of the grenade body.