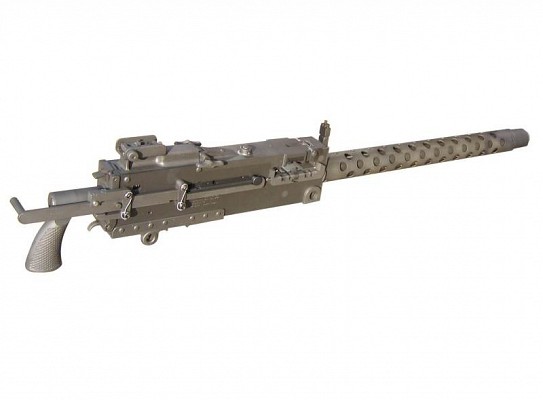 The M37 is a post WW2 vehicle machine gun of US origin. The design is based on the Browning M1919, but features a number of alterations that make it more suitable as a coaxial machine gun.

The M37 is very similar to the M1919. It is a belt fed air cooled machine gun optimized for vehicle use. The main difference is the ability for left and right hand feeding. It is solenoid fired. Alternatively, a pistol grip and trigger are located on the rear of the receiver. The charging handle has been extended rearwards for use in confined spaces.

The M37 was adopted by the United States in 1955. It was mostly used on the M48 and M60 Patton main battle tanks. The M37C was used in limited numbers, mostly on XM1/E1 mount on OH-13 and OH-23 helicopter gunships. A number of M37 was converted to 7.62x51mm NATO as interim solution until adoption of the M73 vehicle machine gun.

M37
Production model for vehicle use, chambered in .30-06 Springfield. Known as T153 during trials.
M37C
Variant of the M37 for aircraft use. Does not feature a sight bracket.
M37E1
Existing stocks of M37 machine gun converted to 7.62x51mm by Rock Island Arsenal and Springfield Armory. Interim use until adoption of M73.