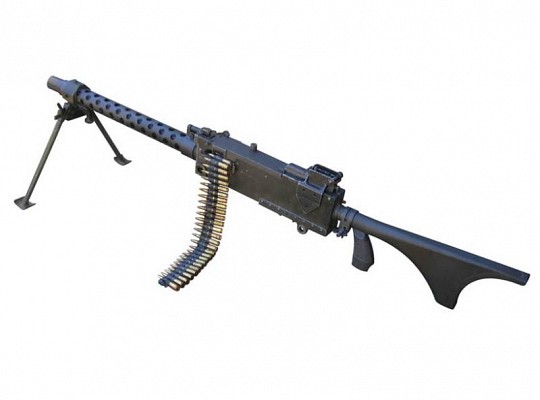 The M1919A6 is a World War 2 era machine gun of US origin. The A6 model is much easier to use during an assault, moving from position to position. The trade-off it that it lacks the sustained fire capability the M1919A4 offers.

The M1919A6 is an infantry model of the M1919A4 with a bipod and shoulder stock. Therefore there is no need to carry a tripod. This makes the A6 more effective during an assault. It is easier to reposition and faster to bring onto target. In order to keep it man portable it has a lighter barrel. This compensates for the added weight of the wooden stock. Since the wooden stock and pistol grip are somewhat of an afterthought, the M1919A6 is less ergonomic than other medium machine guns of the same era.

The M1919A6 fires the .30-06 Springfield rounds from belts of various lengths. The cyclic rate of fire is rather low at 400 to 550 rpm. The lighter barrel compared to the M1919A4 makes the A6 less suitable for sustained fire. Firing from the bipod makes the M1919A6 less accurate at longer ranges than the A4.

The M1919A6 was used extensively at the end of World War 2 and the Korean War. In US service it was replaced by the M60 machine gun.

In US military service the M1919A6 was replaced by the M60 machine gun.