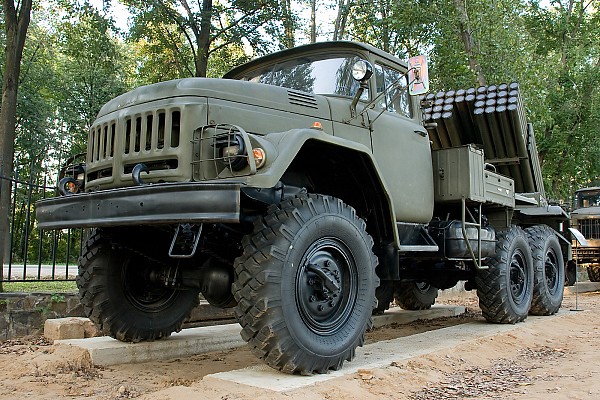 The 9K55 Grad-1 is a late Cold War era multiple rocket launcher of Soviet origin. It is a lighter weight variant of the BM-21 Grad developed for Soviet naval infantry. It uses the shorter range 9M28 series artillery rockets developed several years earlier for the Grad-V that was adopted by Soviet airborne forces.

The 9K55 Grad-1 system is based on the ZiL-131 series of 6x6 tactical trucks. The launch vehicle features a 36-tube launcher that differs in design from the 40-tube launcher as used on the BM-21 Grad. The launcher is trained onto by hand using an indirect fire sight attached to the left side of the launcher. The 122mm artillery rockets are spin stabilized and feature wrap around tailfins. Various types of warhead exist. The rockets are reloaded by hand, sometimes with the aid of a special transloader vehicle.

The 9K55 Grad-1 uses the shorter and lighter weight 9M28 series of 122mm artillery rockets. These come with a variety of warheads, of which HE-Fragmentation most commonly used. These have a range of 15 km. Some sources suggest that the regular 9M22 series artillery rockets with 20 km range can be used by the Grad-1, but this seems to be incorrect. The 9P138 launch vehicle has a 36-tube launcher. All rockets can be ripple fired in about 18 seconds. Additional rockets are carried on the dedicated 9T450 resupply vehicle or regular transport trucks.

The 9K55 Grad-1 is based on the ZiL-131 6x6 tactical truck chassis. This provides good mobility both on and off road. The V8 petrol engine provides a maximum road speed of 80 km/h. A variant of the Grad-1 based on a modified 2S1 Gvozdika tracked chassis was developed, but never left the prototype stage. This would have provided increased off road performance and amphibious capability.

The 9K55 Grad-1 system is based around softskin tactical trucks. These vehicles do not provide protection against direct fire, indirect fire or NBC threats. After firing a salvo the launch vehicles should relocate in order to avoid counter battery fire. The limited 15 km range of the 9M28 series artillery rockets makes the 9K55 Grad-1 not only vulnerable to counter battery fire by long range artillery systems, but also by regular tube artillery. An armored variant of the Grad-1 based on a modified 2S1 Gvozdika tracked chassis was developed, but never left the prototype stage.

The 9K55 Grad-1 was formally adopted by the Soviet Union in 1976. About 500 launch vehicles were produced. In Soviet service the 9K55 Grad-1 was issued only to naval infantry. It seems that the Grad-1 was never exported, although some sources list Iraq as a client. After the collapse of the Soviet Union most Grad-1 ended up in Russian service, with small amounts ending up in the half a dozen former Soviet states. The Grad-1 seems to be in limited service to this day. 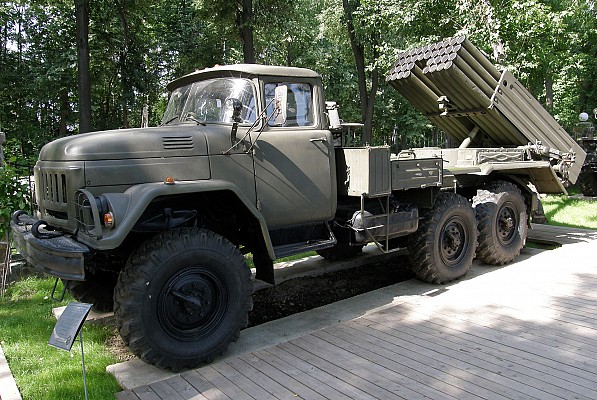 Launch vehicle based on ZiL-131 6x6 truck chassis. Introduced in 1976. Features 36 tubes for the 9M28 short range variant of the Grad artillery rocket. Note that the cover of the launcher differs from the 40 tube launcher used on the regular BM-21 Grad. Dedicated ammunition transport vehicle for 9K55 Grad-1 system. Based on a regular ZiL-131 cargo truck and is fitted with racks to hold unpacked 122mm 9M28 series artillery rockets. First introduced in 1983, before then regular transport trucks were used.

Additionally, a 9F380 battery support vehicle based on ZiL-131 chassis can be added. 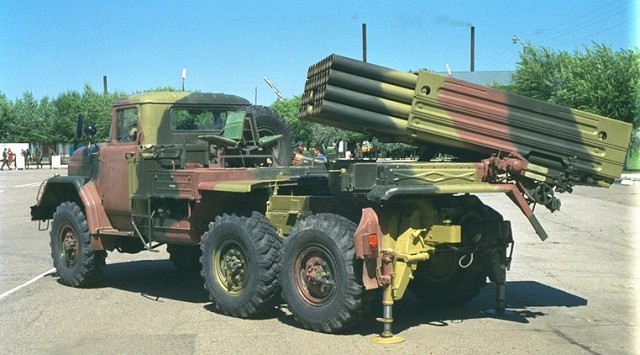 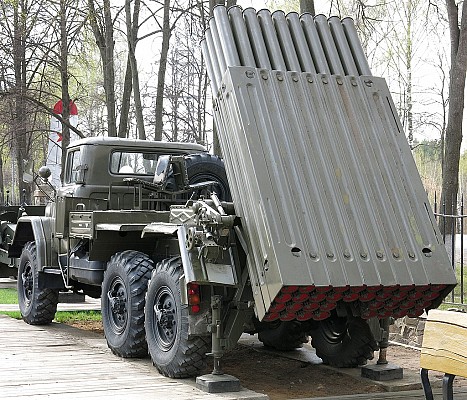 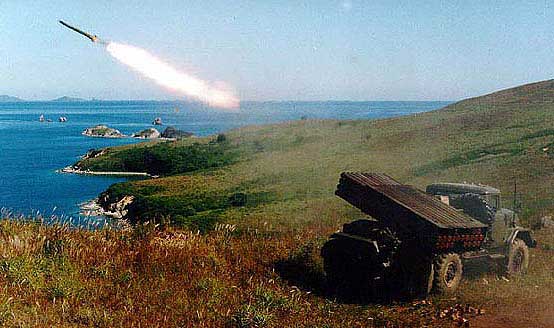 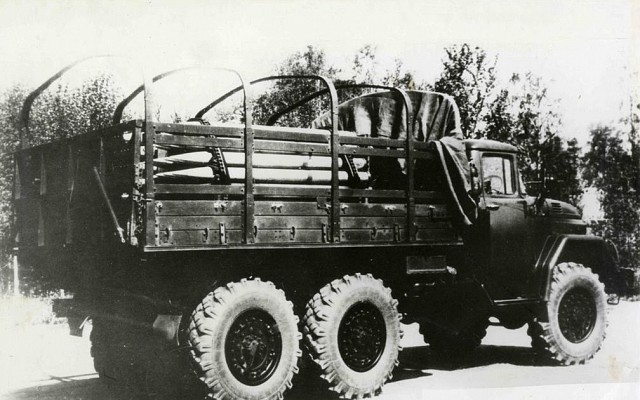 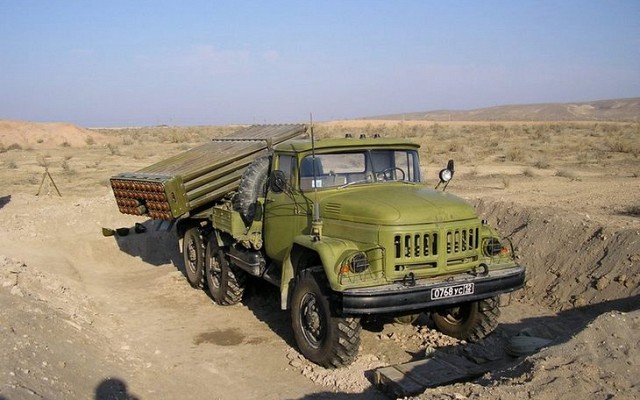 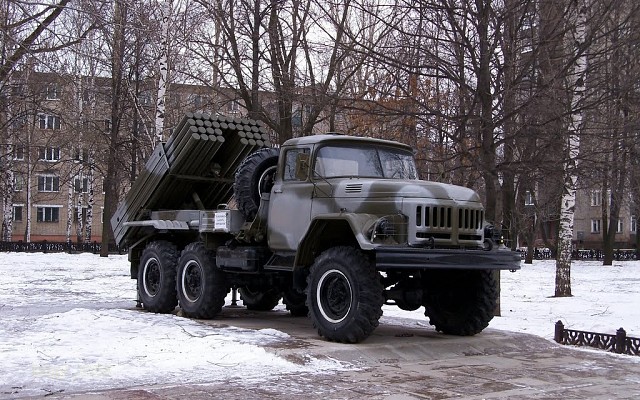 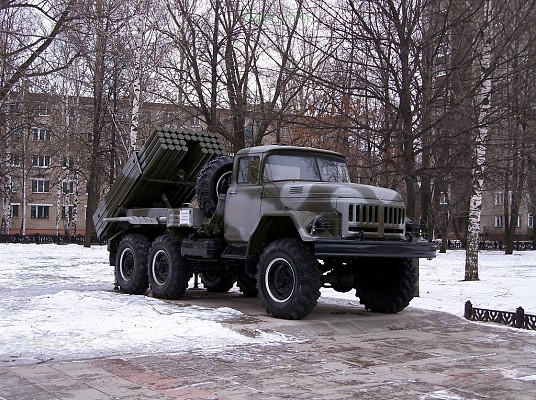 The 9K55 Grad-1 is a lighter Grad system intended for regimental use. It was introduced just over a decade later than the first version of the BM-21 Grad. 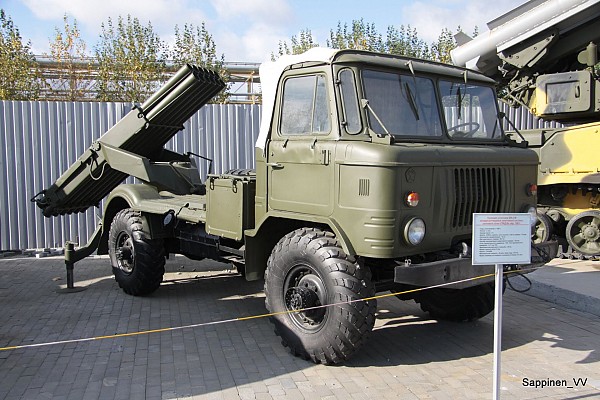 The 9K54 Grad-V is multiple rocket launcher that can be dropped by parachute. The 9K55 Grad-1 uses the same shorter range 9M28 series of artillery rockets as developed for the the Grad-V.