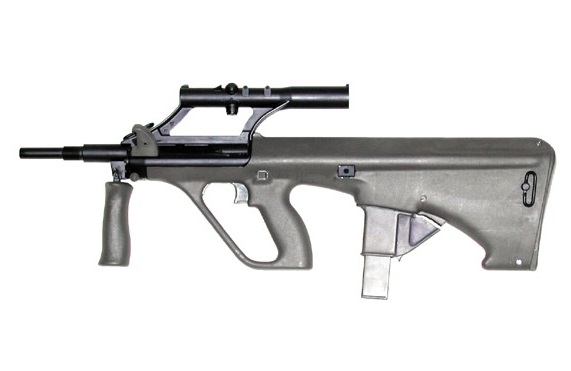 The Steyr AUG Para is a sub machine gun of Austrian origin. It was developed in the mid 1980's and complements the Steyr AUG line up of small arms. The name Para is a reference to the 9x19mm Parabellum cartridge. The AUG Para was produced both as a complete firearm and as a conversion kit for a regular AUG A1 or A2 assault rifle.

The AUG Para is based on the Steyr AUG bullpup design pattern and uses the same polymer housing. While on the outside the AUG Para looks very similar to the regular AUG, the internal mechanism of the Para is rather different. The AUG Para is a blowback operated weapon that fires from a closed bolt position. An adapter in the magazine well holds the smaller magazines associated with 9x19mm. The barrel has no flash hider. A few centimeters from the muzzle the barrel is threaded to accept a silencer.

The AUG Para fires the 9x19mm Parabellum round from a 25 or 32 round magazine, with the 25 round capacity being most common. The magazines are of the same pattern as used in the Steyr MPi-69 sub machine gun. Since the AUG Para fires from the closed bolt position first shot accuracy is rather good. The two stage trigger allows for semi automatic and full automatic fire, a feature not often found

The AUG Para was produced mainly for law enforcement use. The first adopter was the Austrian police and a number of other nations acquired it as well. The AUG A3 XS model replaced the AUG Para in production in the late 2000's. 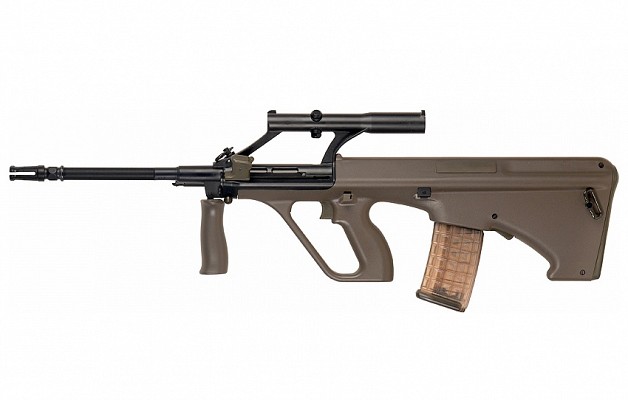 The AUG Para was derived from the Steyr AUG A1 assault rifle.