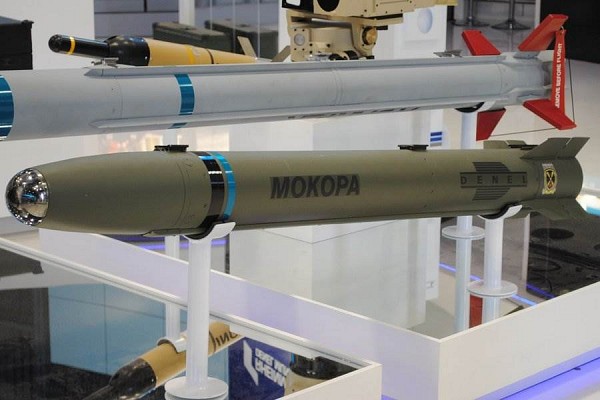 The Mokopa is a modern anti-tank missile of South African origin. It was developed as part of the armament package of the South African Rooivalk attack helicopter. The Mokopa has a similar role as the US AGM-114 Hellfire missile and has comparable characteristics.

The Mokopa has a conventional layout with the guidance section in the nose, followed by the warhead in the middle and solid fuel rocket engine at the rear. Four wings with a control surface are located near the nozzle. The baseline model uses semi-active laser homing with lock-on-before-launch and lock-on-after-launch capabilities. A millimetric wave radar and an imaging infrared are alternative seeker types that are reportedly available.

The Mokopa uses a tandam HEAT warhead for use against armored vehicles. Penetration of 1.350mm RHA behind ERA makes the Mokopa effective against all modern types of main battle tanks. A blast fragmentation warhead for anti-shipping use is reportedly available. The maximum effective range when launched from a helicopter is 10 km. Using semi-active laser homing accuracy at maximum range is quoted as little as 0.3 meter deviation.

The Mokopa was originally intended for use on the Rooivalk attack helicopter. It can also be integrated on other types of helicopters, and it is marketed for use on vehicles and ships.

The Mokopa is used in limited numbers by the South African air force. Integration on the Rooivalk attack helicopter has stopped due to budget cuts.

The Mokopa is a modern anti-tank missile. It bears resemblance to the US AGM-114 Hellfire and UK Brimstone missiles. The baseline model uses semi-active laser homing and is fitted with a tandem HEAT warhead for use against armored vehicles. Alternative seeker types are millimetric wave radar and an imaging infrared. A warhead for anti-shipping use is reportedly available.