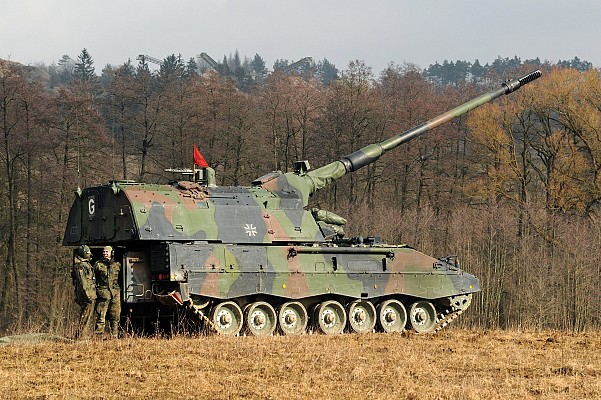 The PzH 2000 is a modern self-propelled howitzer of German origin. The PzH 2000 was developed at the request of the German military following the cancellation of the SP-70 project. PzH 2000 stands for Panzerhaubitze 2000, or "self propelled gun 2000" in English. Two consortia set out to develop prototypes in 1986. The first consortium was headed by Krauss-Maffei and the second by Wegmann. In 1990 the contract was awarded to Wegmann. Testing and improvement lasted until 1996.

The layout of the PzH 2000 is conventional. The engine is mounted at the front with the turret and ammunition in the rear. The driver is seated in the hull on the right of the engine. The rest of the crew is seated in the fighting compartment. The chassis is based on many proven components of the Leopard 1 main battle tank. The PzH 2000 is fitted with the Rheinmetall 155mm L/52 chromium lined howitzer connected to an automatic loader and Modular Charge System specifically designed for the PzH 2000. The PzH 2000 has a fully automated fire control system and has a multiple round simultaneous impact capability.

The 155mm L/52 barrel allows for long range fire. Normal unassisted ammunition may be fired up to 30 km, base bleed rounds well over 40 km depending on type. During tests a range of 67 km has been achieved with the South African rocket assisted shells. The fully automated loading of charges and rounds results in a very high burst rate of fire. With the standard 24 Volt loading system 3 rounds can be fired in 9 seconds, with the sustained rate of fire being 10 rounds per minute. The optional 48 Volt loader has an even better performance. The advanced fire control systems in conjunction with the muzzle radar gives the PzH 2000 a high level of accuracy. A 7.62mm MG3 or MAG machine gun is mounted on the turret roof for self-defense.

For a self-propelled howitzer the PzH 2000 has a quite significant level of armor protection while its has an all welded and relatively thick steel hull. Add-on roof armor increases the level of protection versus top attack weapons. The PzH 2000 is operated from under armor protection. An NBC system, fire suppression system and smoke grenade dischargers are fitted as standard. Survivability is further increased with its shoot and scoot ability. The PzH 2000 can start a fire mission while on the move with the first round fired only seconds after coming to a halt. The dash speed allows the PzH 2000 to quickly leave after firing.

The mobility of the PzH 2000 is quite good for such a heavy vehicle. The tracked chassis provides a good cross country performance. A MTU 1.000 hp diesel provides propulsion, while and APU provides power when the engine is not running. Even though the power to weight ratio isn't very high, especially when fully loaded and fitted with additional roof armor, the dash speed remains high.

The PzH 2000 is used by various European nations, with the main user being Germany. Even though the PzH 2000 was introduced when the Cold War was over and demand shifted to lightweight wheeled self-propelled howitzer it sold reasonably well. The PzH 2000 remains in production today. 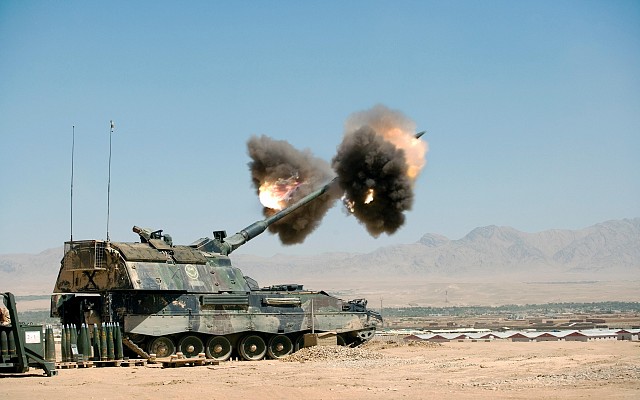 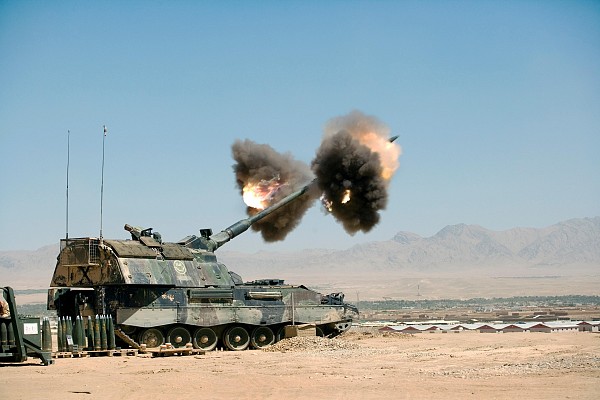 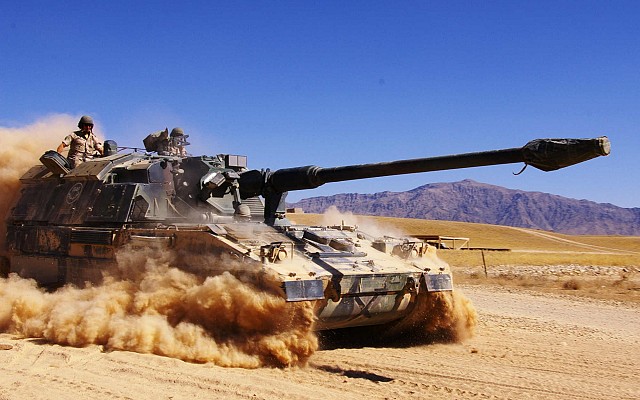 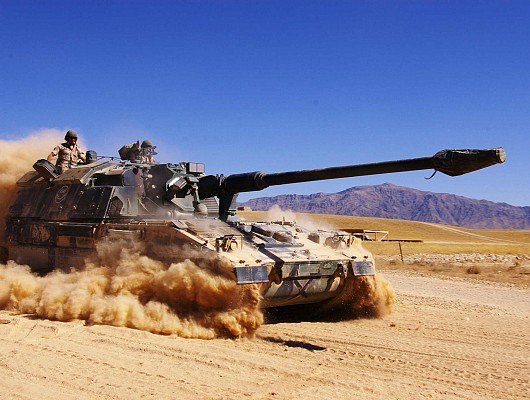 Dutch PzH 2000 on the move in Afghanistan. 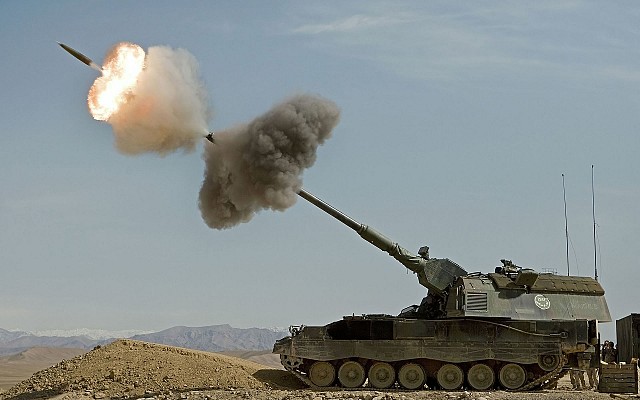 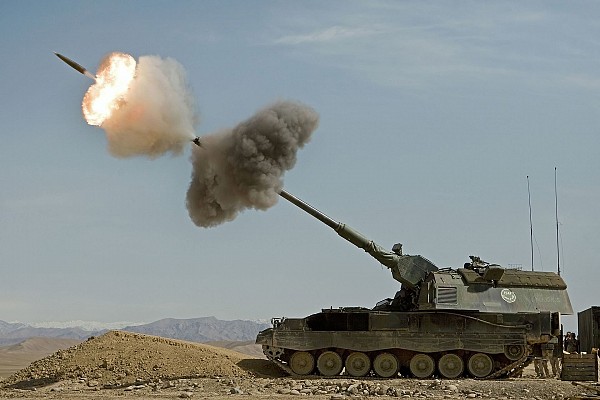 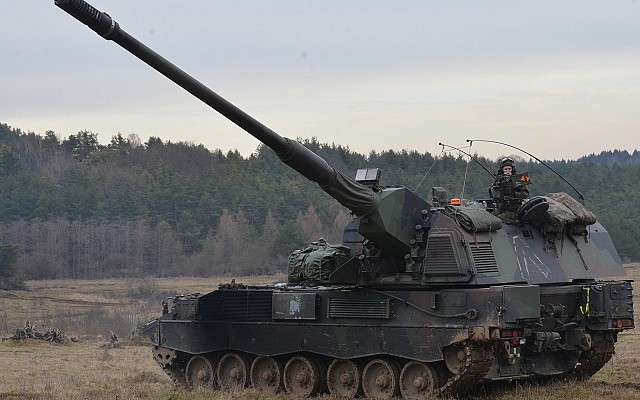 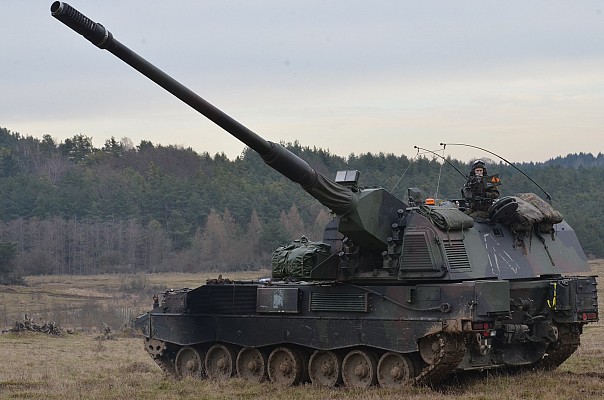 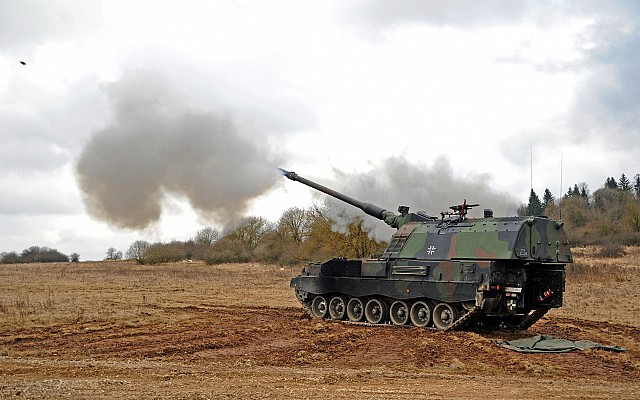 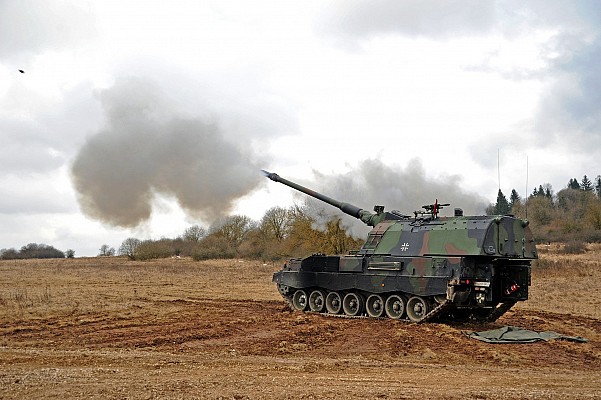 German army PzH 2000 firing a shell during an exercise.

The Japanese Type 99 self-propelled howitzer is also armed with a 52-caliber howitzer which has a similar multi-slotted muzzle brake.