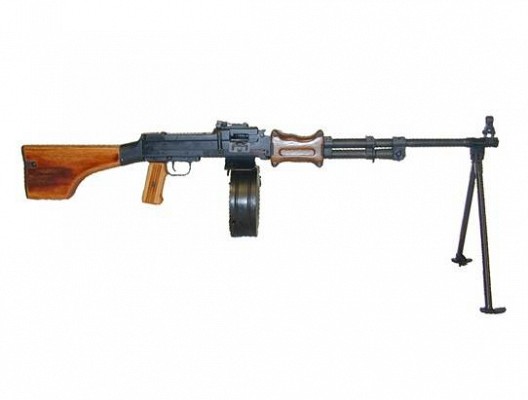 The RPD is a machine gun of Soviet origin. It was developed during the later stages of World War 2 as a more portable alternative to the DP. The name RPD stands for Ruchnoy Pulemet Degtyarova, which is Russian for "Degtyarev light machine gun". The RPD became the standard issue machine gun for infantry use in the USSR and is one of the most produced machine guns in the world.

The RPD is a gas operated belt fed machine gun that uses a long stroke gas piston. It feeds from a 100 round non-disintegrating belt and feeds from left to right. The forearm and buttstock are made out of wood, the rest of the weapon out of metal. The RPD features a thick barrel that cannot be quickly changed in the field. The bipod is positioned near the muzzle.

The RPD is a belt fed machine gun that fires the 7.62x39mm Soviet round, which is also used in the Kalashnikov rifle. The 100 round belt is contained in a round box that is clipped under the weapon. The RPD is only capable of automatic fire and the cyclic rate of fire is 650 rpm. The effective range is about 300 meters against point targets and 600 meters against area targets, although targets out to 800 meters can be engaged.

The RPD first and foremost user of the RPD was the USSR. The RPD was a standard issue weapon until it was replaced by the RPK and PK. The RPD was widely exported and produced under license in various nations. Even though it is often supplemented by newer designs the RPD remains in active use in the Middle East, Africa, Asia and South America. 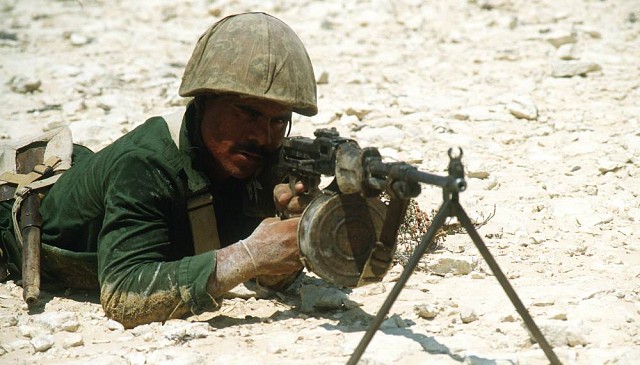 Egyptian marine with RPD machine gun during a joint exercise with US forces.
Source: US DoD - © Public domain

The RPD is an early Cold War era machine gun of Soviet origin. Four models have been produced in the USSR, each featuring minor improvements over the other. The first two models differ in the design of the gas piston and windage knob. The third model adds a dust cover to the feed mechanism. This model is also produced under license in China as the Type 56.

The fourth model has a longer gas piston, a dust cover and a buffer in the buttstock. The fourth model is sometimes called the RPDM and was also produced in Poland. The improved Chinese Type 56-I is similar to the RPDM but also features a folding feed cover. All models are roughly similar in size, weight and performance. 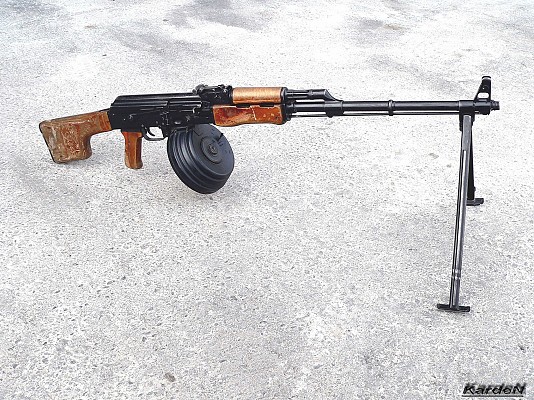 The RPK replaced the RPD in Soviet service. It is a box fed light machine gun based on the Kalashnikov assault rifle.

In some roles the RPD was replaced by the larger caliber PK belt fed machine gun. 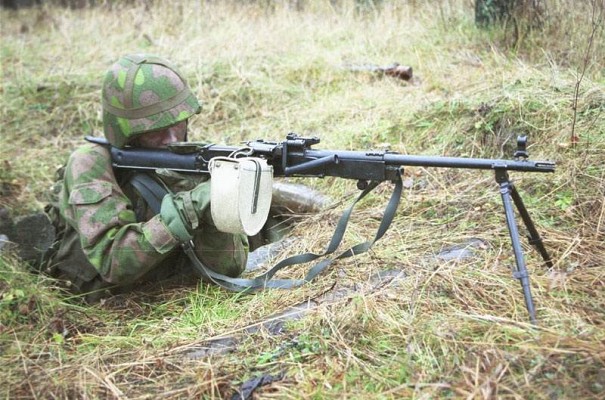