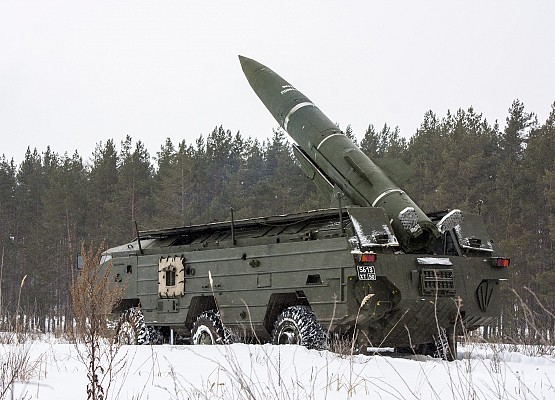 Rear view of 9P129-1M launch vehicle of the 9K79-1 Tochka-U tactical missile system seen during an exercise in 2018.
Source: Ministry of Defence of the Russian Federation - © CC BY 4.0

The 9K79 Tochka is a late Cold War era tactical missile system of Soviet origin. It was developed in the early 1970's as a more capable alternative to the 9K52 Luna-M (NATO: FROG-7) large unguided artillery rocket. Tochka is also known under the name OTR-21, which stands for Operativno-Takticheskii Raketnyi kompleks, which translates to "tactical operational missile complex".

The Tochka is a highly mobile system that launches short range ballistic missile that can be fitted with multiple types of warhead. The missiles use a solid propellant rocket motor, making them practically immediately ready to launch, unlike for instance the liquid fueled Elbrus (NATO: Scud) missile. Over time the rockets have been improved in range and accuracy. Inertial guidance is used. The 9P129 amphibious launch vehicle carries a single rocket within the vehicle. In the firing position the rocket is raised and launched from the vehicle.

The Tochka carries a single short range ballistic missile with good range and accuracy. The maximum range is 70 km for the original model and 120 km for improved Tochka-U. The warhead may be conventional high explosive, fragmentation, 100 kt nuclear, chemical or . The CEP was 150 m for early models and improved to 95 m and 70 m subsequently.

The launch vehicle and transloader are based on a wheeled amphibious vehicle with limited degree of all around armor protection. This resists small arms fire and shell splinters. The missile is covered in transit, increasing protection from shrapnel. These vehicles are also optimized for the nuclear battlefield with the ability drive and launch the missiles from within under NBC protection. Reloading does seem to require some manual activities. The main protection for the Tochka is that its range allows it to operate from behind friendly frontline troops.

Compared to the Luna-M that the Tochka replace the mobility is much improved. First and foremost it is based on a chassis that functions, unlike the complicated 8x8 chassis of the Luna-M. The lower center of gravity improves off road performance. A unique feature is that the Tochka has a substantial amphibious capability, being propelled in the water by water jet.

The Tochka was used by the USSR in brigades of 18 vehicles. It was exported to several Warsaw Pact nations and ended up in service with various successor states of the Soviet Union. The number of users has reduced but the Tochka remains in service. It has been employed in the Chechen wars and in the 2008 South Ossetia war. In Russian service it was fully replaced by the more capable 9K720 Iskander (NATO: SS-26 Stone). However, during the 2022 Ukraine war Russia re-introduced the Tochka from storage. Both Ukraine and Russia have actively used the Tochka in combat, sometimes with devastating effect. 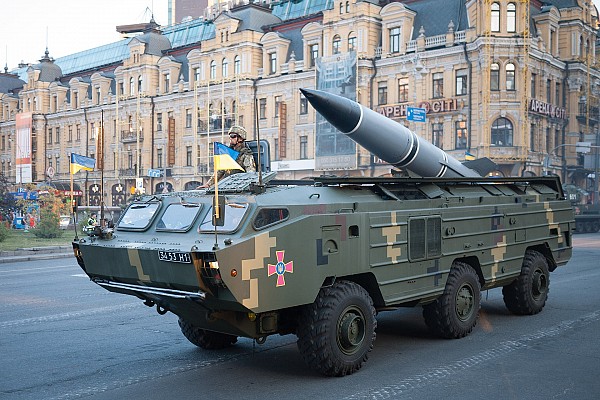 Six wheel launch vehicle based on the BAZ-5921 amphibious chassis. The launch vehicle has a single 9M79 missile ready to launch in a raiseable cradle. When on the move the missile compartment is covered by to two large cover plates. 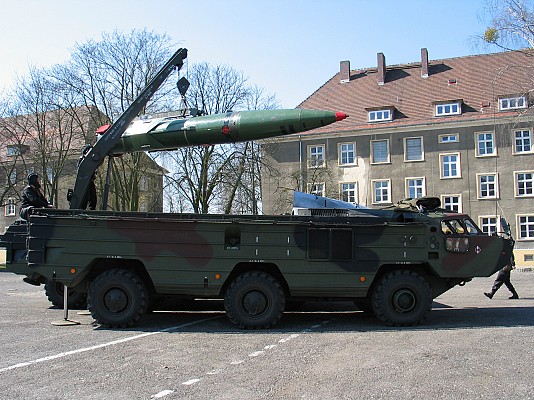 Six wheel transloader based on the BAZ-5922 amphibious chassis. Two 9M79 missiles can be stored under cover. The SB-75 hydraulic crane is fitted to transfer a missile to the 9P129 launch vehicle. This reportedly takes about 19 minutes. 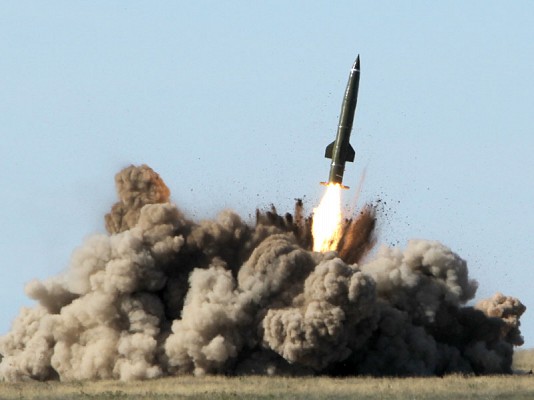 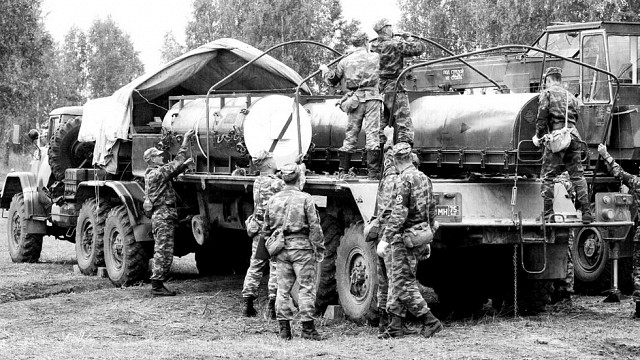 Specialized trailers for transportation of 9M79 missiles and warheads in the rear area. These twin axle trailers are used in conjunction with a ZiL-131V tractor truck. 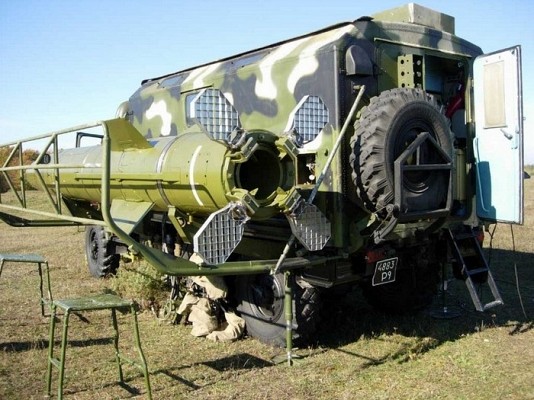 Support equipment consists of several vehicles. The main types are the 9V819 (and 9V819-1) automated control and testing vehicle and the 9V844 (and 9V844M) maintenance vehicle. The 9V819 services the 9M79 missiles and warhead and the 9V844 supports the vehicles and various types of equipment. Both vehicle types are based on the ZiL-131 truck chassis with a K-131 box body, with the 9V844 also towing a generator trailer. 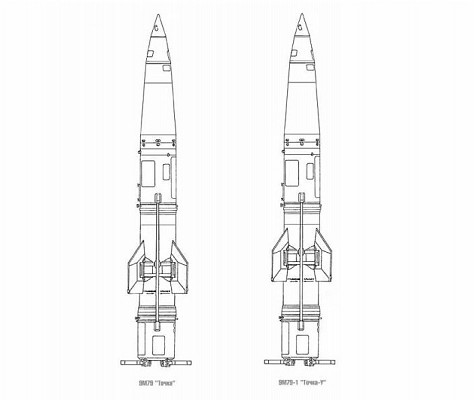 9M79 Tochka
First generation missile introduced with the 9K79 Tochka system in 1976. Used with unitary HE-fragmentation and nuclear warhead at first, with cluster added in 1980. Designated Scarab-A by NATO.
9M79M Tochka
The 9M79M is an improved production model with similar performance as the 9M79. The 9M79M was introduced in 1983 and adds ability to be used with the 9N64 nuclear warhead and 9N123F-R passive radar homing warhead. With the latter warhead it is sometimes referred to as Tochka-R. NATO designation remained Scarab-A.
9M79-1 Tochka-U
Longer range missile introduced with the 9K79-1 Tochka-U system. The rocket motor has a more powerful propellant and slightly increased fuel load. This increases the maximum range to 120 km. The main wings are moved a bit closer to the center. Accuracy is improved by with improved inertial navigation and new guidance computer. The Tochka-U missile can be used with at least six types of warhead. This missile is known by NATO as Scarab-B. 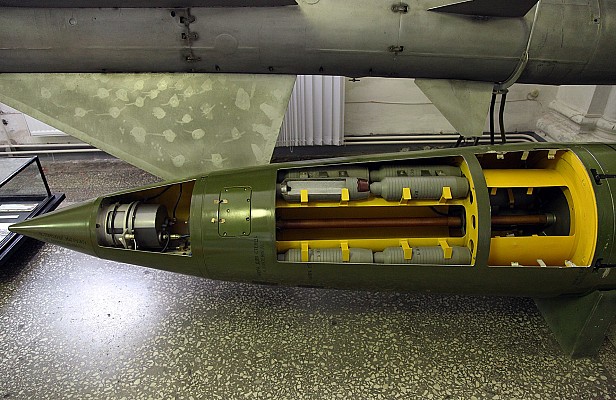 9N123F
Unitary high explosive fragmentation warhead. Introduced in 1976. Contains 162.5 kg of explosive and creates 14.500 fragments. The laser proximity fuse detonates the warhead 20 m above ground level for maximum effect.
9N123K
Cluster warhead with 50 9N24 submunitions. Introduced in 1980. Each submunition contains 1.5 kg explosive and creates 316 fragments. The cassette opens at an altitude of 2.25 km and disperses the submunitions at an area of 7 hectares.
9N39
Nuclear warhead with AA-60 nuclear bomb with variable 10 to 100 kt yield. Introduced in the late 1970's, possibly as early as 1976.
9N64
Nuclear warhead with either AA-86 nuclear bomb with variable 5 to 50 kt yield or AA-92 bomb with 100 to 200 kT yield. The variant with AA-86 was introduced in 1981. The version with AA-92 was introduced around 1988 and is only used with Tochka-U.
9N123F-R
Unitary high explosive fragmentation warhead with passive radar homing for use against radar installations. Comes in variant for pulsed and constant emission radar types. Target radar frequency is set before launch.
9N123G
Chemical warhead with 65 containers for VX nerve agent. There is also a 9N123G2-1 variant with 65 containers for Soman nerve agent. 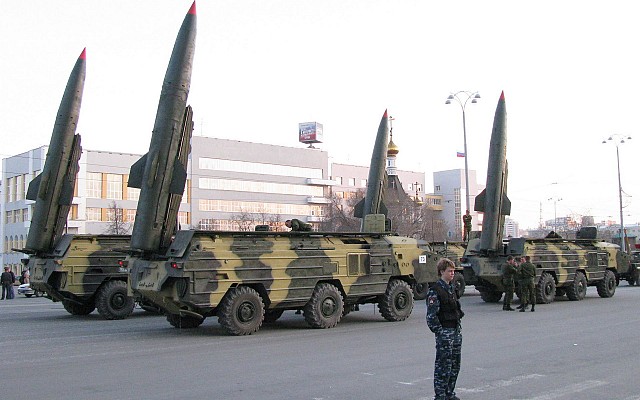 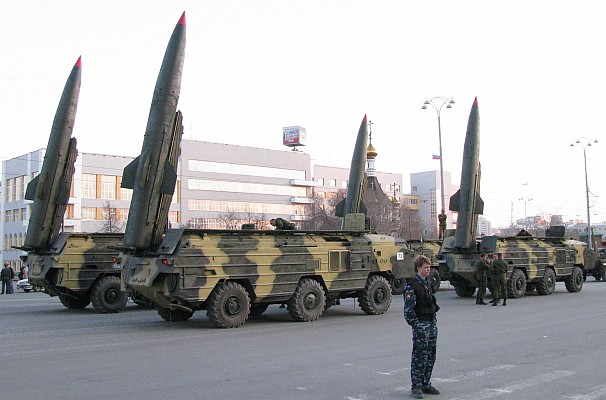 Four 9P129-1M launch vehicles of the Tochka-U system on parade in Yekaterinburg in 2009. 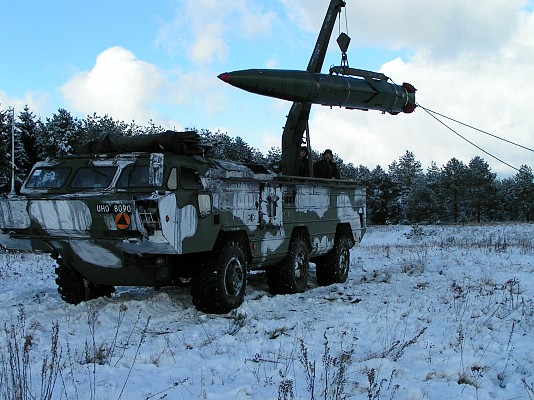 Polish 9T218 transloader seen hoisting a 9M79 tactical missile during an exercise in 2004. 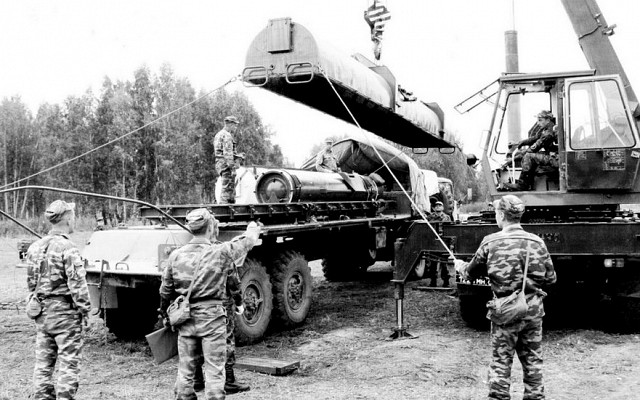 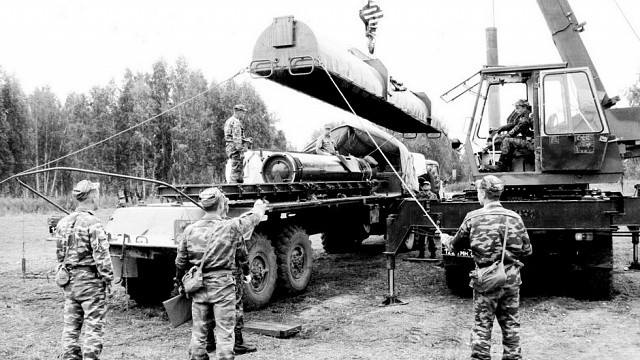 Polish army 9T218 transloader hoisting a warhead section of a 9M79 missile during a live fire exercise in 2004. 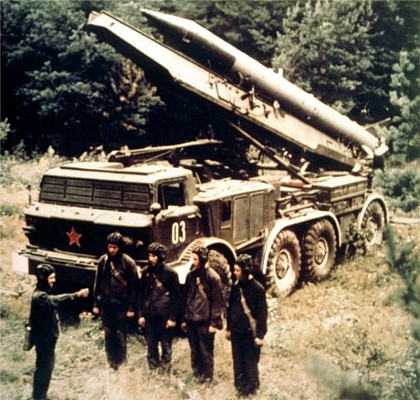 The Tochka was a replacement for the Luna-M large artillery rocket. Tochka was a quantum leap improvement in range and accuracy. As such it is more effective in deep strike interdiction. 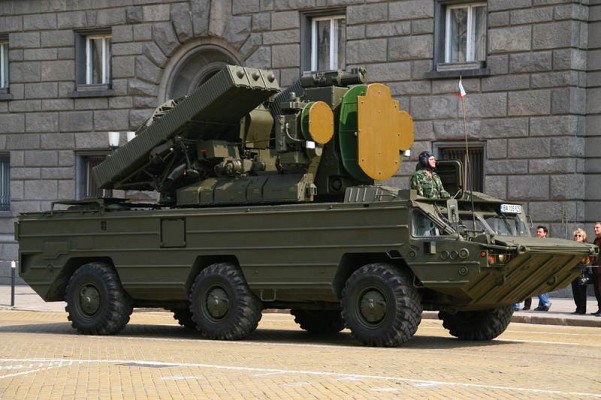 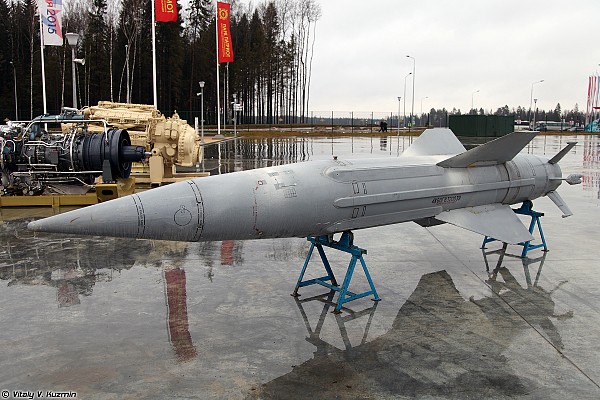 The design of the Tochka missile was patterned after the V-611 surface to air missile. This has a similar length, diameter and main wing set up. Over time various changes were made, such as introducing the lattice tail control fins.