The FMBP-48 is an early Cold War era sub machine gun of Portuguese origin. It is named after the year of introduction and the factory "Fabrica Militar de Braco de Prata", also known as FBP. The original design was patterned after the MP40. Due to World War 2 the production was delayed and after the war several principles of the M3 Grease Gun were implemented. Overall the FMBP-48 was a cheap and well performing weapon.

The design of the FMBP-48 is based on the German MP40. The same same bolt, telescoping spring and magazines are used. The stamped receiver and retractable metal wire stock are patterned after the M3 Grease Gun. Most FMBP-48 are fitted with a barrel lug to allow the standard Mauser bayonet to be fitted. Over time the design was upgraded and resulted in the FMBP-63 and FMBP-76.

The FMBP-48 fires the 9x19mm round from 32 round MP40 magazines. The cyclic rate of fire is 500 rpm. The FMBP-48 fires fully automatic only, later models are select-fire. The maximum effective range is quoted as 200 meters.

FMBP-48: Portuguese sub machine gun that fires the 9x19mm round. It features many elements of the German MP40 and US M3 Grease Gun.

FMBP-63: Improved FMBP-48 introduced in 1961 and adopted in 1963. It is similar to the FMBP-48, but has a fire selector and the ability for semi-automatic fire. The FMBP-63 was never produced in large quantities. 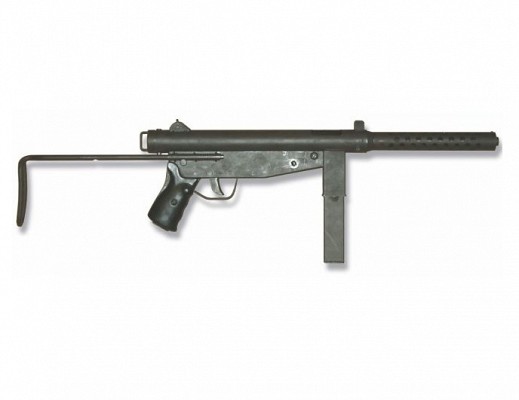 FMBP-76: Much improved model of the FMBP-63. It features a grip safety, improved sights and a barrel shroud. Even with these additions the FMBP-76 is lighter than the previous model. The rate of fire has been increased from 500 to 600 rpm. Officially, the FMBP-76 replaced many older types of sub machine guns in Portuguese service. But it seems that not that many were replaced before the introduction of the Uzi and G3 rifle.

The FMBP-48 uses many design features from the M3 Grease Gun.

In Portuguese service the FMBP-48 was replaced by the Uzi sub machine gun.